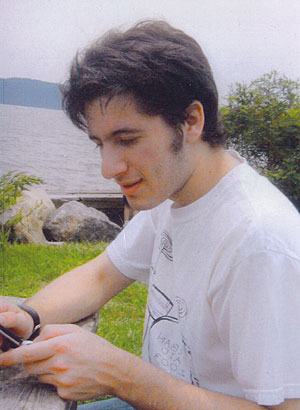 Noah Simring was a beloved student at Kroka. He was a bright, talented, kind and lovable young man. Noah struggled trying to fit into today’s world. On Noah’s 21st birthday, he took his own life. To honor Noah’s life, and in an attempt to help others who may be struggling to find themselves in this changing world, Noah’s parents Jim and Ruth Simring and his sister, Mia Simring, have established a memorial scholarship in Noah’s name.

One annual $500 scholarship to attend any Kroka Program, including apprenticeship and/or semester programs.

Any young man or woman age 16 and older, who may be trying to find their way in the world and wants to be part of Kroka’s community.

Please read below, about Noah’s life and his challenges. Then submit a letter of interest (handwritten or typed), along with your chosen Kroka program application to Kroka Expeditions, 767 Forest Road, Marlow, NH 03456, attn: Noah Simring Memorial Scholarship.

Upon completion of their Kroka program, the scholarship recipient will submit an artistic reflection of their experience (song, music, poem or prose, or any visual art form). This artistic work will be shared with Kroka’s community, Noah’s family and if possible, with their community at home.

A Few Things About Noah Simring

Every summer in high school Noah went on a rugged outdoor trip: canoeing down the Allagash Waterway, trail-repairing with the Landmark Volunteers on the Appalachian Trail, kayaking in Maine with Kroka, or canoeing in Alaska with NOLS (after two years at Kroka, Noah said NOLS was a walk in the park). Of all his trips, the time he spent with Kroka was the toughest but the most rewarding. He learned how to start a fire with one match in a rainstorm, or start a fire without a match, using a bow drill. He made his own twine, his own fishhooks out of bone, his own spoon, and birch bark bowl. He learned to appreciate companionship after spending a day alone fending for himself on an island off the coast of Maine. He mimicked Misha with a teasing twinkle in his eye to show his deep respect, admiration and affection. The time he spent with Kroka was part of his personal identity as a lover of nature, of the old ways, and preserving of the Earth’s integrity.

Maybe because of his love for nature Noah recycled everything; paper, metal, glass, electronics, computer guts, broken parts, and useless things, which he put into a box called “the un-useless box.” He had a deeply held rigid belief it was every individual’s duty to save the planet by recycling everything. When he worked as a cashier at Starbucks he brought home all the coin wrappers so they could be properly recycled at home. His backpack was filled with coin wrappers, which then overflowed his room. He brought home the day old cakes for doormen and homeless people he passed late at night on his way home. He did not believe one should waste anything. He learned to eat an apple; core, seeds and all, leaving only a small stem to throw away.

Noah was always drawing, painting, writing poetry, or composing music. He would have an inspiration and write it down on an envelope for guitar strings, or a paper plate from a pizza parlor. He thought of mathematical puzzles and thought about numbers constantly. His own songs were haunting and mournful. He always changed the tuning on his guitar in ways that are hard to duplicate, and wrote down little notes to himself as reminders. As a child, his piano teacher thought he was a musical prodigy, and he had perfect pitch. She could play any note on the keyboard and he could name the note with his eyes closed and his back turned. His favorite musicians were Chopin, Beethoven, Bach, and then he fell in love with Scriabin. He had stopped playing and performing piano but he composed relentlessly. While he was in Japan he wrote several short pieces titled Moth, Centipede, and Spider after the bugs he encountered. He wrote several nocturnes and instead of giving the usual musical notation (andante, diminuendo, or pianissimo) his directions would be, “sounds of night transfigured” or “darkness in daylight” or, as in the bug pieces he had notations such as: “dinosaur walking away” and “moving frantically on the floor” and “where is it?” and “get the napkin!” He infused humor with his seriousness.

Noah played his beloved vintage Mayqueen guitar with his band Ghostcloud. They recorded their music on quarter inch tape, using tube amplifiers, and had their music pressed onto vinyl records. The quality of the sound and the honesty of pure sound were of an ideological and esthetic importance to him. He felt digital recording was inferior though easier. Then he decorated the plain paper wrappers of the vinyl record individually so that each was a unique piece of artwork. He didn’t believe in doing things the easy way. He never wavered in his enthusiasm for vinyl records, collecting all the retirees old classical recordings before they were thrown out to the trash, like a rescue operation.

Noah felt the need for companionship, even though he said he didn’t fit in anywhere. He experienced a depth of loneliness that made my heart ache for him. I never want any other human to ever feel they don’t fit in anywhere. My grandmother used to say, “There is a lid for every pot.” I always told him that. I believe there is a place for every person: a place to belong and fit in, regardless of differences or personalities, or ideologies.

I am hoping that the Noah Simring Scholarship for Wilderness Living will enable a young person to find a place in a very basic world where survival and companionship are everything: a place where one can feel they belong, even when they have lost their direction.