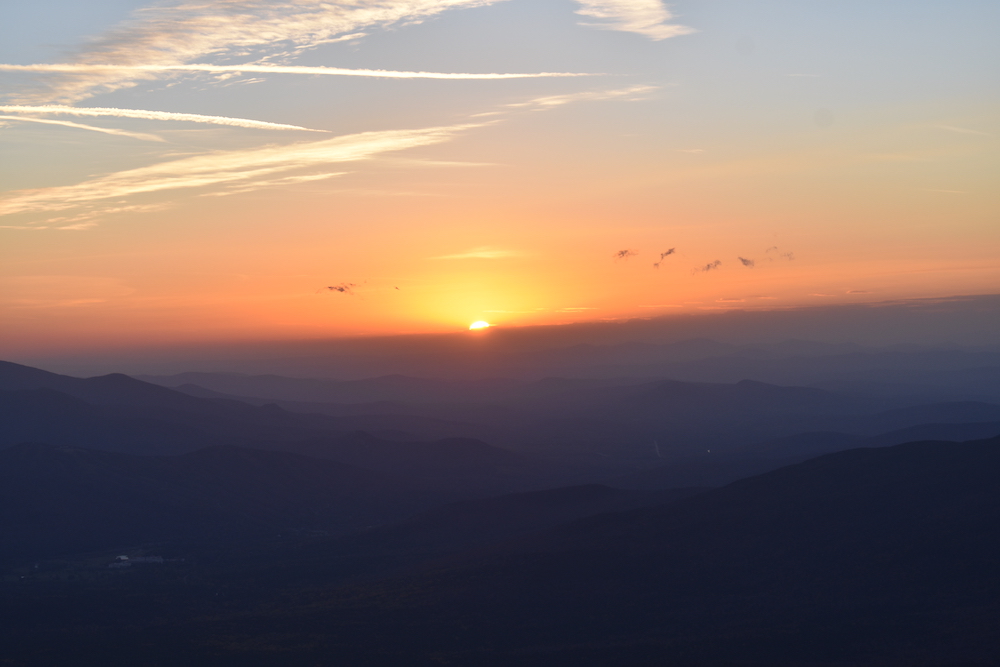 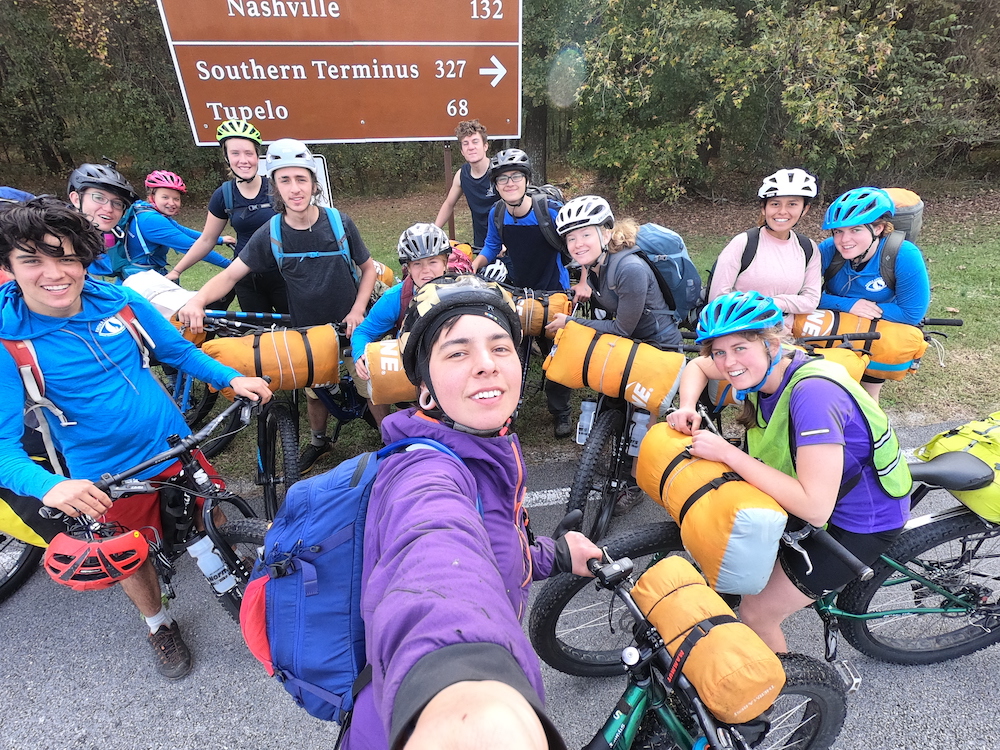 (NOTE: Due to our camera card getting packed away by mistake in the gear shuffle, there is only one photo for this blog. We are sorry and look forward to sharing photos in the next one!)

As the days grew shorter and the air crisper in NH, our big expedition grew near. We spent an intense week packing, preparing, and re-planning the trip. The original plan was a 30-day river trip down the Rio Grande, but unfortunately, the lower canyons were closed so we had to improvise. Our new plan was to bikepack 700km down the Natchez Trace Parkway over the course of one week, drive to Big Bend State Park for a 150km bikepacking loop for the next week, and then switch with the gap year group to paddle the upper canyons of the Rio Grande for 2 weeks while they bikepacked a section of the Arizona Trail. We had one busy week to set ourselves up for success.

After all our gear was prepped, routes were planned, and food was packed, we woke up on Oct. 30th to a blanket of snow covering basecamp. Like every morning, we did chores: chainsawed, split and stacked wood, and buttoned up the farm and farmhouse for winter. After, we packed our vans and said our goodbyes to wintery New England.

Our first stop was Blue Heron Farm in Lodi, NY. We arrived late Friday night and slept in the cozy hay barn. The following day was spent offering hands in the gardens, and at night we carved pumpkins under the full moon. We all got one more good cozy night all together in the barn before departing the next morning.

We said our goodbyes to Ruby, Tricia and our gap year friends and set off towards Nashville, TN. Driving south we crossed four states on our first day. Over our first 19 hours of travel we studied the landscape as it transformed around us. The greens got greener, the land got flatter, and the air got warmer. We drove the Shenandoah Parkway and peered around the ancient Blue Ridge Mountains as the sun took its course towards the horizon, lighting up the rolling peaks and the brightly colored trees. Finally, we found a campsite in the Cherokee National Forest.

We continued our drive to the northern terminus of the Natchez Trace, travelling across cultures and studying southern history from diverse perspectives. We arrived at the Trace after hours of driving and prepared for the 444 miles of biking ahead of us.

On Tuesday morning, we packed our bikes and left our campsite. Biking along the Trace, we began to travel through the seasons, seeing fewer and fewer fall colors. We biked 30 miles our first day to warm up for the challenges that lay ahead of us. That night we decided to sleep out under the night sky to save time the next morning, as we knew the following day would be a long one.

We woke up before the sun with 83 miles to cover. This was a distance further than any of us had ever biked in one day. Putting all of our doubts aside, we packed up our camp and pedaled into the day. As our bodies began to ache, they also grew stronger. We stopped at a waterfall to wash away the sweat and refresh our bodies, minds, and souls to keep us going for the remaining 60 miles. With 35 miles left to go, we pedaled into the sunset. At this point nothing could stop us; we had caught our stride and embraced the discomfort that lived in our muscles. We pushed onward with the force of our wills and arrived to our campsite in Alabama after 14 hours of biking. Tired, sore and proud, we ate dinner understanding we are capable of more than we imagined.

The next day we woke up later and adapted our plans to prevent us from biking in the dark again. Along the way we stopped to learn about sacred Native American mounds and springs, acknowledging the true history of the land. Due to bike repairs, our day grew longer and daylight began to fade away however. At 5:20pm our lead instructor Jackie was struck by a driver under the influence and was knocked unconscious. Everyone stayed calm amidst the traumatic experience and played an important role in the situation: Magda, our other instructor, performed a patient assessment while Anna supported Jackie’s head to protect her spine, Sonai and Isabelle flagged down cars to call 911 and block traffic, Jackson recorded the patient assessment to pass on to the paramedics, Elias brought the driver away from the situation, Cate called Dave at Kroka, and the rest of the group organized bikes, belongings and traffic as professional help arrived. The ambulance arrived quickly and Anna went with Jackie to the hospital, and the first responders and a few people who stopped brought us and our bikes to our next campsite. The next morning, we found out that Jackie didn’t break any bones, but suffered a concussion and significant bruising. We were all incredibly lucky that Jackie was OK and she rejoined us the next day! We are so thankful for all the help we received.

Our next few days were spent at the same campsite while Jackie started to recover from the accident. We discussed the incident and planned out how we wanted to move forward. Although most of us were scared to get back on the Trace, our group was strong. We decided to drive down to Rocky Springs where we would depart the next day to complete the Natchez Trace with lighter bikes. Pedaling another 55 miles safely, we concluded our first week of expedition. The week we spent on the Natchez Trace challenged us physically and mentally, but through the hardships we faced, we grew together.

Having finished out our first week on the Trace, we loaded up our trailer and began the 20 hour journey to Big Bend State Park in Texas. We stayed one night in Austin, courtesy of Isabelle’s family, before arriving in the heart of the desert. We travelled into a dry sea with hot, arid days and cool calm nights, and watched the environment transform around us once more.

The first morning we woke to the sun lighting up the pink mountains and mesas that cascaded around us as the air began to warm. To test the waters of biking in such a different environment, we packed our bikes for an 8 mile day trip. We spent the day enjoying biking on trails, cruising down hills, and beginning to feel and know life in the desert. Our night was spent under the stars, telling stories of constellations and making wishes as starts shot across the brightest night sky many of us had ever seen.

The next day we woke up with the sun once again and packed our bikes. Before leaving, we learned about plate tectonics and gained a better understanding of how the beautiful beige mountains and mesas that we would be biking through were formed. Our 12 mile day pushed us as the sun beat down on us and the spiky desert poked holes through our tires. After a day of exploring and feeling the extremes of the desert landscape with many flat tires, we reached our campsite. We ate a late dinner and spent another night under the stars.

Another long day of biking through the desert. We pushed further up through Fresno Canyon with layers of rock towering around us. With many more flat tires, Jackie and our gear managers, Isabelle and Elena, worked hard to keep us pedaling over the glassy igneous rocks and through the cacti covered desert. Our day was concluded as we made our way up and out of the canyon and towards the Sauceda Ranger Station. Because of a problem with Elias’s bike tire, he ran for the last 7 miles while we pedaled alongside him to camp.

After a second late night in Big Bend State Park, we had a layover day to rest while Jackie worked on bike problems. We explored the surrounding area and deepened our connection to the land. By this point, we were beginning to understand the desert. We felt its heat and its thorns, and lived through the discomforts of such a different and intense place, while seeing its beauty as well. Unfortunately, Elias’s bike could not be fixed. Once again, we had to improvise and develop a new plan. The following day, Jackie, Teo and Jackson biked 25 miles back the way we came to our original campsite with light bikes to get the van. The rest of the group spent another day hiking and exploring in Cinco de Lleva Canyon. The groups joined back together that night for one more evening in Big Bend, experiencing another desert sunset as the landscape was lit ablaze and the wispy clouds turned pink and disappeared into the vast night sky.

On our final day of biking, we pedaled 26.5 miles down the gravel road that leads to the ranger station. One last push. We flew down in the course of about 5 hours. Looking back at our experience we recognized all that we had gained. We have become stronger, more competent bikers, pushed our wills to allow us to do incredible things, and built a community like no other. Strong, resilient, and ready for whatever they universe throws our way on the river!