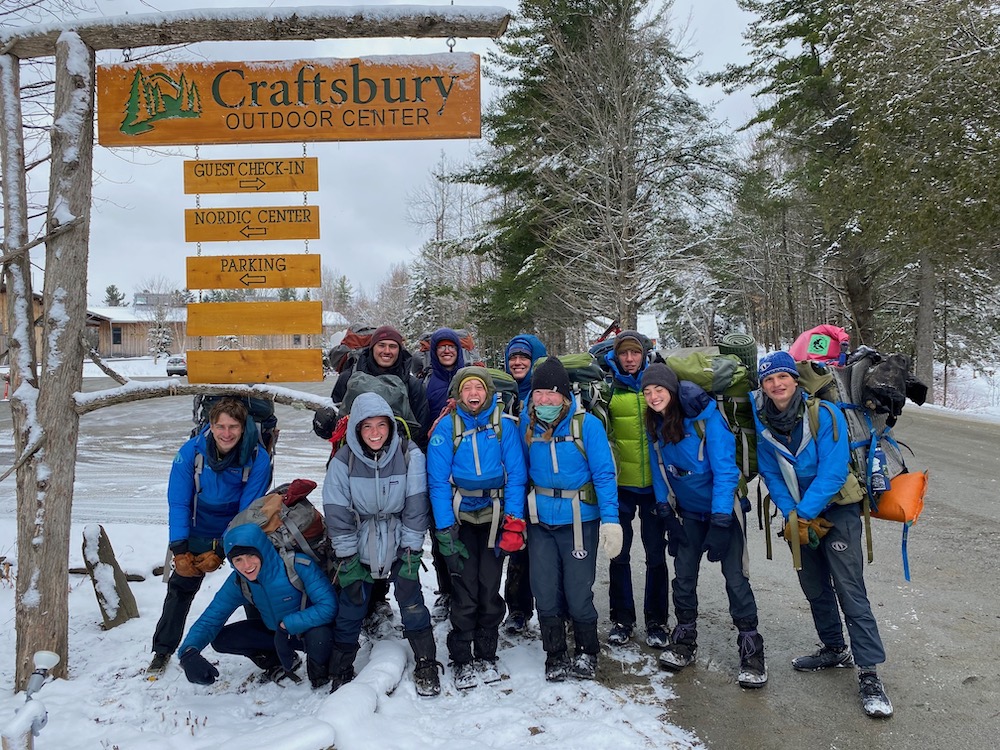 Aloha from your favorite brave expeditioners! We’ve arrived in Craftsbury after two weeks of travel with many wonderful adventures, and a few mishaps, under our belts. 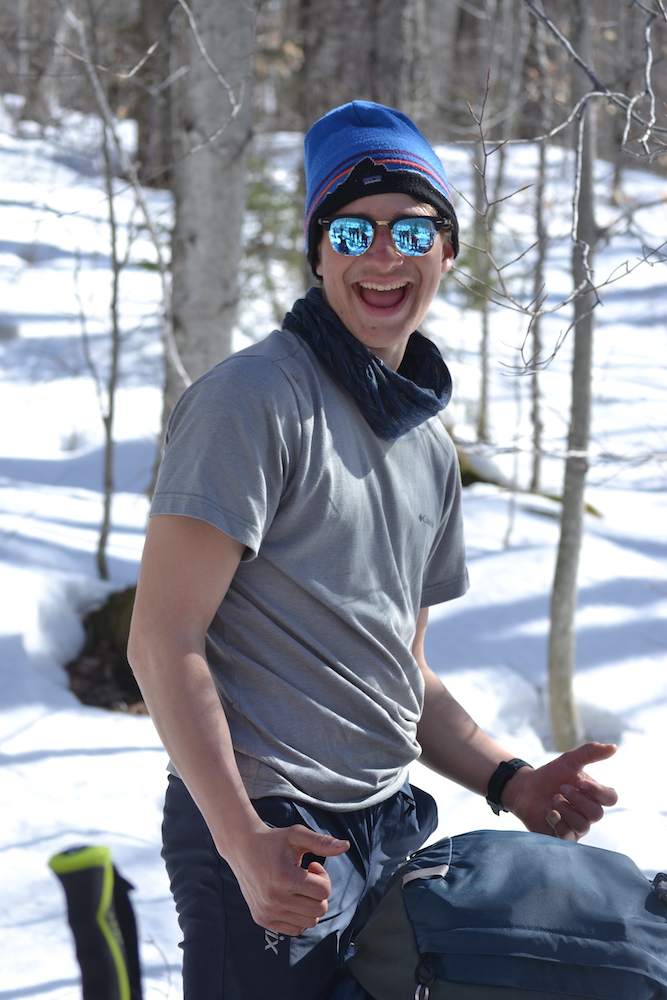 After our stay in Waitsfield, during which we focused on academics, eating lots of fresh food, and crafting birch wood shrink boxes with semester alum Oliver Mednick, we embarked on leg three of our journey. Leaving Waitsfield, we said goodbye to Jo, who had been with us since the beginning, and welcomed Zoe as a new (to us) instructor. 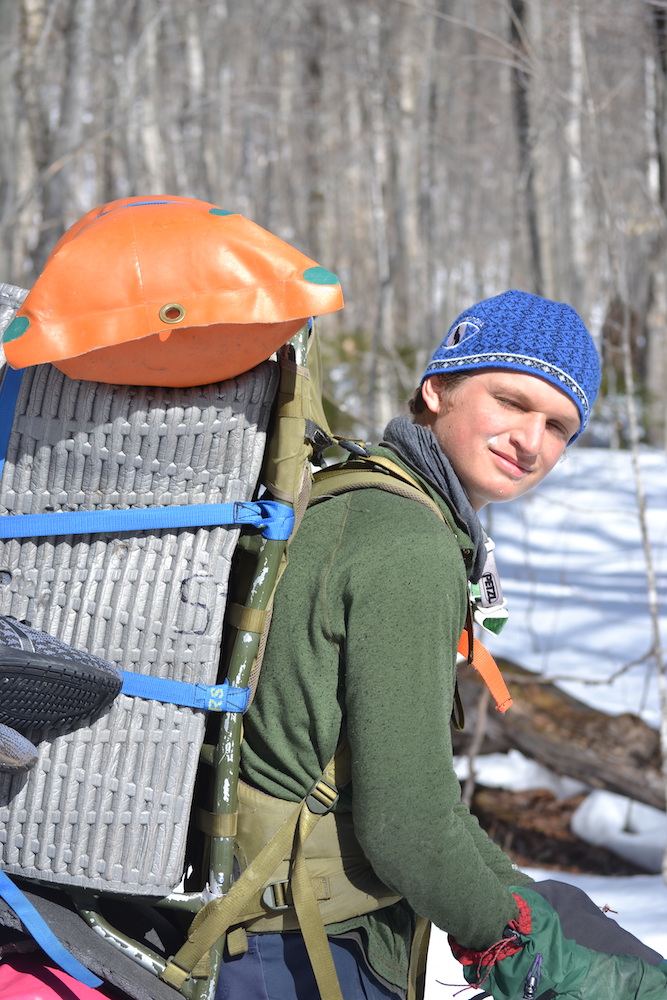 Jo had been kind enough to shuttle our skis to the trailhead, so our packs were a bit lighter as we set off.  However, soon after arriving at the end of the road, we discovered a slight setback. Henry’s skis were gone, as were James’ boots and Sylvan’s poles. Someone must have taken them! James gave his skis to Henry and his poles to Sylvan, and used a pair of snowshoes that Oliver provided for the next several days. Watching James, we saw what an advantage our skis were. Instead of gliding gracefully, he was now trudging slowly. He was a good sport about it though, and we all had a good laugh when he tried to catch up at one point by rolling downhill like a log. 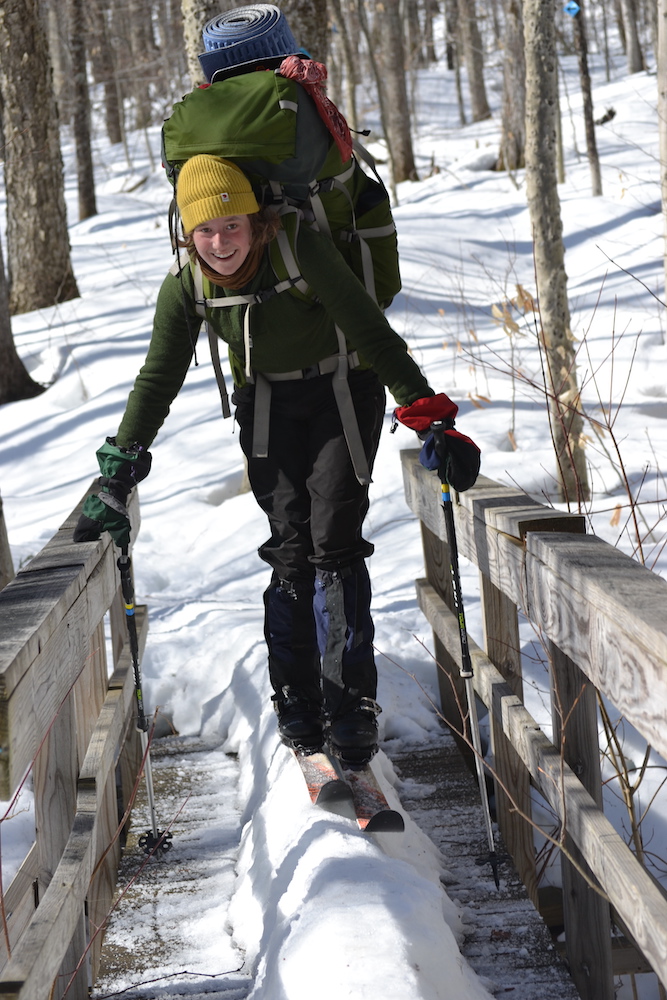 After a few days Teo was kind enough to trade equipment with him, and took on the snow shoes for a 23 kilometer day. Though this must have been exhausting, he also didn’t complain. Meanwhile, back in Waitsfield, Oliver put out a Facebook post explaining that the giant pile of skis had been in use and not “up for grabs,” and within a minute got an remorseful response from a local who had mistaken our gear cache for a free pile. Oliver met us in Honey Hollow, on the south shore of the Winooski River, with the recovered equipment. Much to our relief, we were back on track! 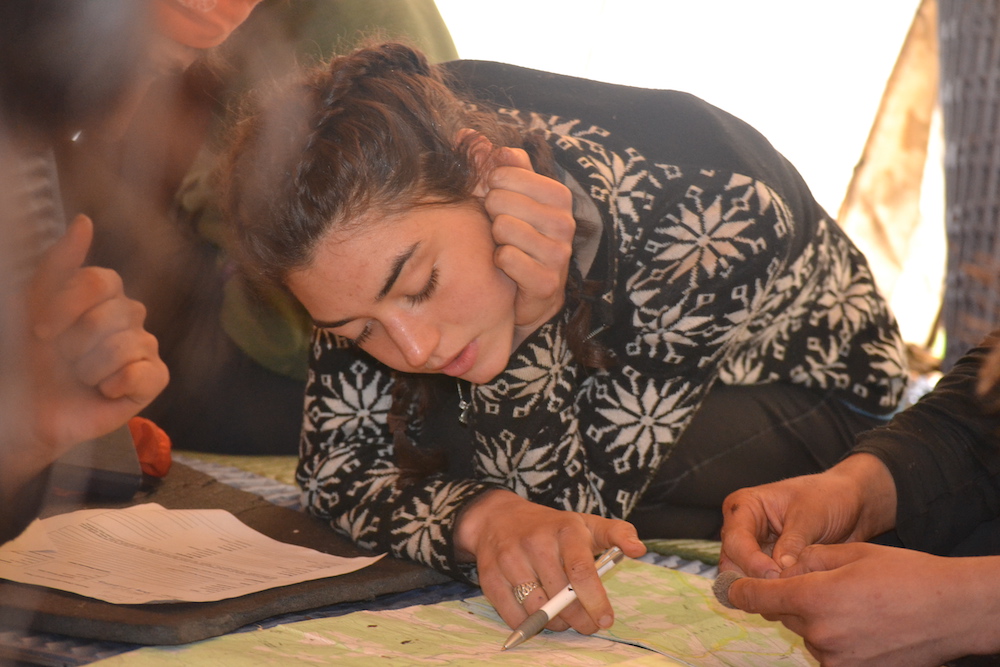 Our days were spent in a blur of new experiences that were quite different from the first two legs. To prepare for independent group travel, we have been honing our navigational and leadership skills. Two of us are tasked each day to work as a team in organizing the group, maintaining efficiency, and finding our way from one camp to the next using topographical maps. 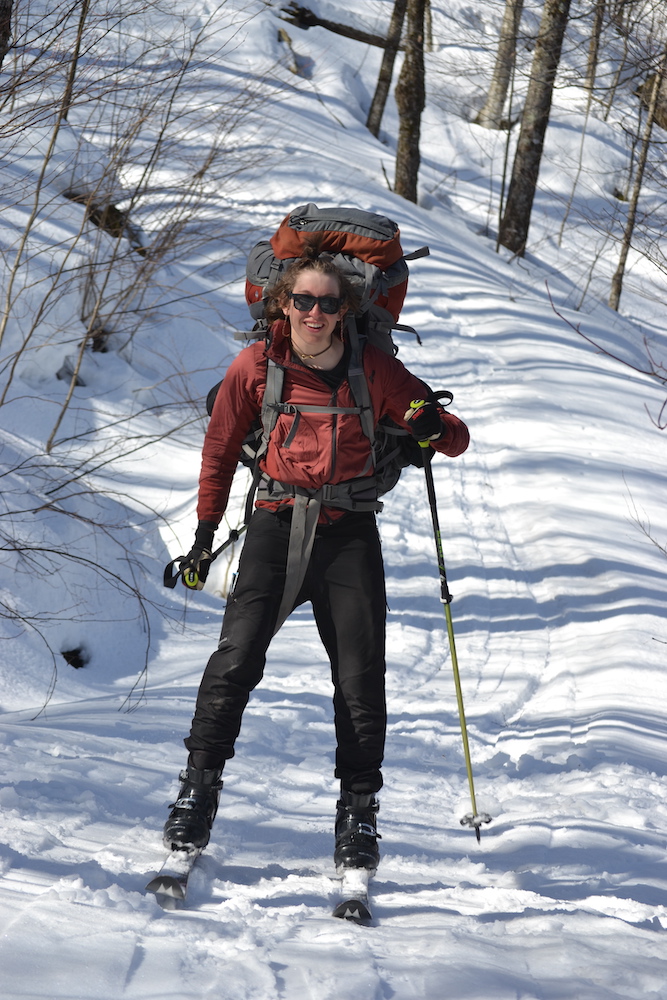 Teo never complained, even when the winter tent was soaked with rain, nearly doubling the weight of his pack

On one of our treks we were joined by a friendly husky pup who we named “Bannock.” She trotted along with us for hours, keeping us company and showing us how easy it was for her to make her way through the slushy snow as we slogged along on our skis. After several miles, we handed her off to some friendly folks who promised to use their phones to find out who she belonged to. We miss our furry friend, and hope she’s doing well. 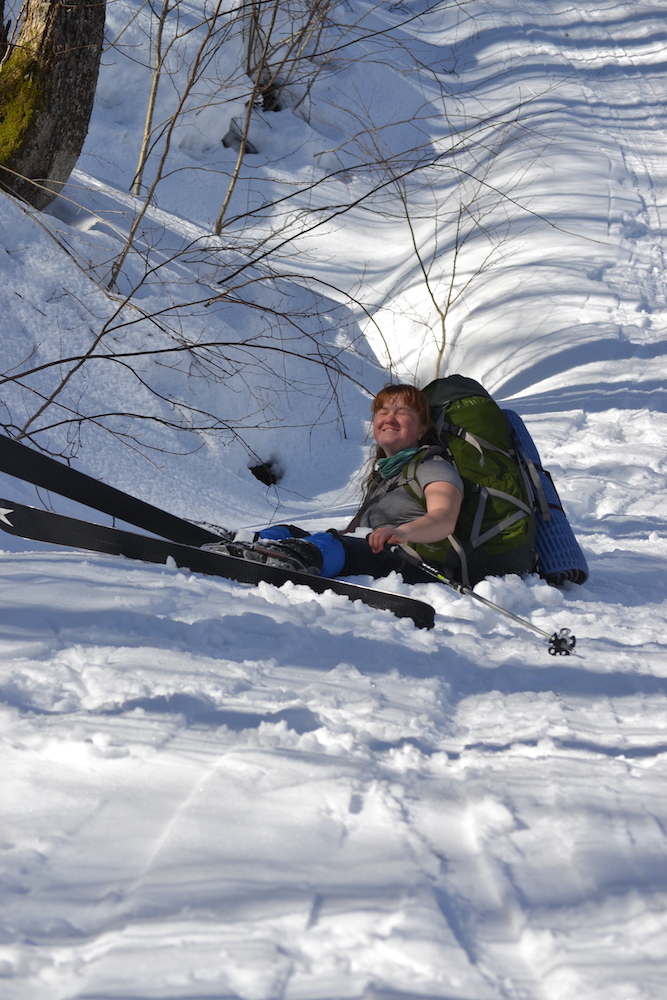 The days are growing warmer, which means that we can now do academics outside of the tent. Dave has been teaching us all about Wilderness First Aid, which has been quite a blast. We love Dave’s fun and interactive approach to teaching the Patient Assessment System! 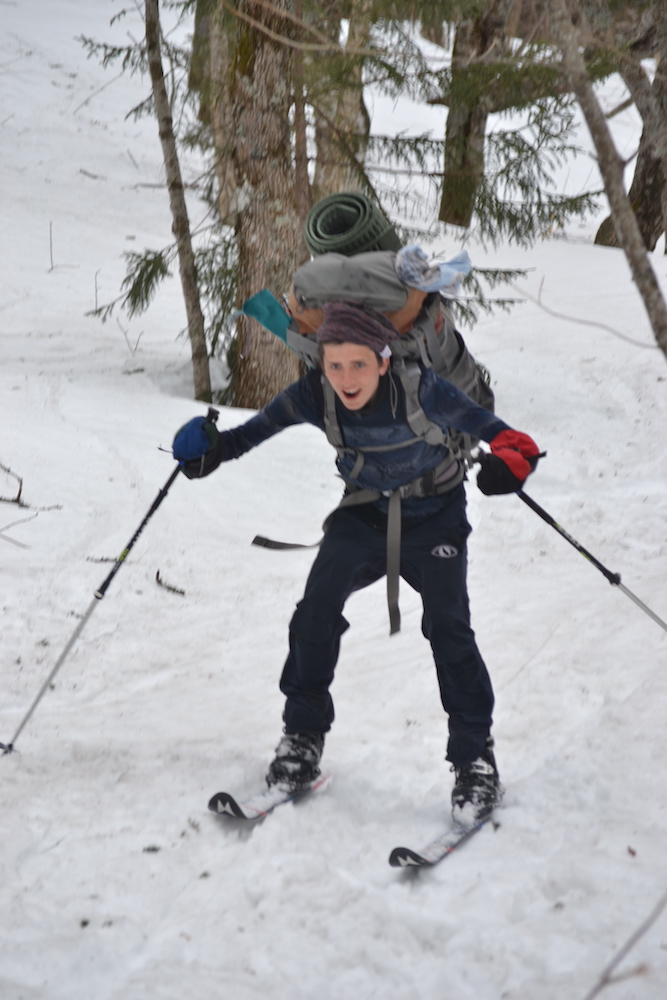 Will, showing that enthusiasm and focus are equally as important as technique

Another thing we have been studying is the book The Endurance by Alfred Lansing. It is fascinating for us to learn about the incredible journey these people experienced, and to find similarities between their adventures and our own. The book explains how much the men, trapped in the antarctic, talk about and crave specific foods, and gives a list of what each man wished he could eat. We found this funny because, often times, all we can talk about is food, too. Here are some of our own most wished for meals: 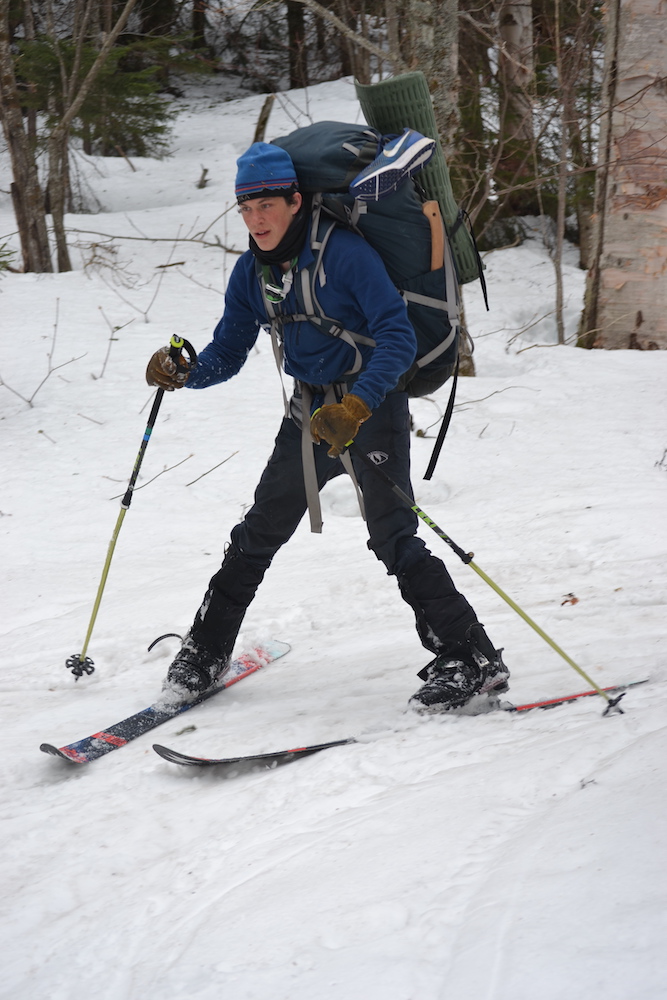 Along with the ability to have a class or two outside, the coming of spring brings with it a significant change for us in our mode of travel. On March 24th we had our last full day of skiing. We enjoyed the end of our time zooming down hills, with some celebrating the fact that this would be the last time having to deal with ascending and descending hills with slippery boards on their feet. Our mood was light-hearted and goofy as we skied along and, given that the snow was, as Teo put it, “legally classified as mashed potatoes,” we all fell down a ton, one after another on each slope. We laughed at ourselves and continued on our way. 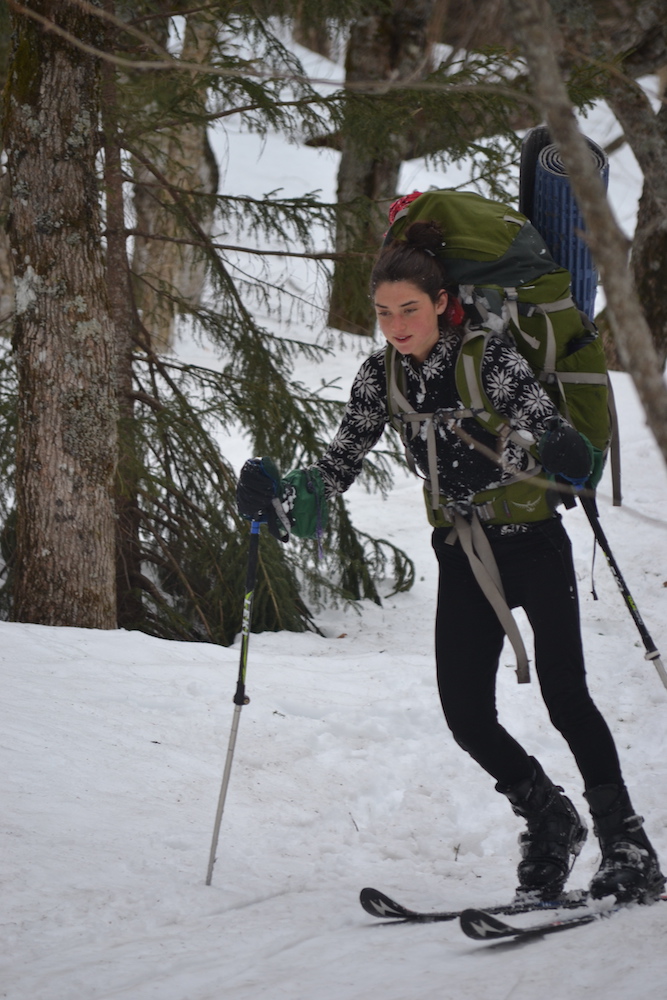 The next day the sun was shining and we arrived at the Trapp Family Lodge to collect our food resupply and to drop off our skis. Some of us bid a bittersweet farewell to our skis, boots, and poles, while others said more of a good riddance! We set out from there on foot, now simple backpackers making our way down the trail. 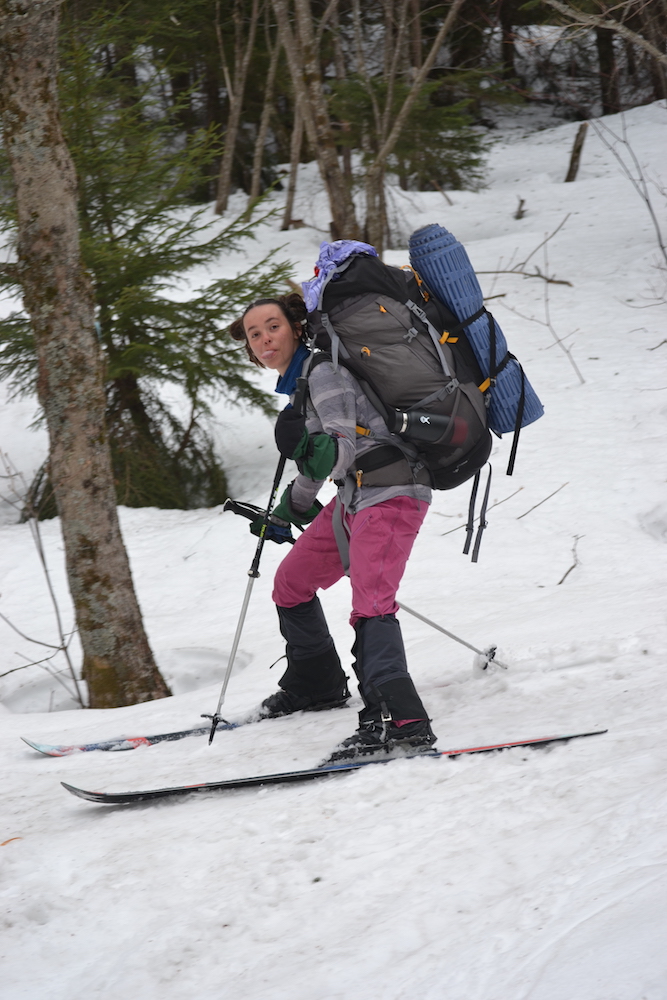 Lissa showing us how to carry a heavy load, and what she thinks about being photographed at the moment

As we continue along, squelching through squishy mud and melting snow, our feet never quite fully dry, we are growing to appreciate more than ever something we used to take for granted, the kindness of strangers. Every so often, when we are tired and thirsty after hours of trudging along the Catamount Trail, we will come across a person in their yard and ask them if they would allow us to fill our water bottles. These people are always more than happy to oblige and, on top of refilled water bottles, we often also find ourselves munching on granola bars and devouring fresh clementines. 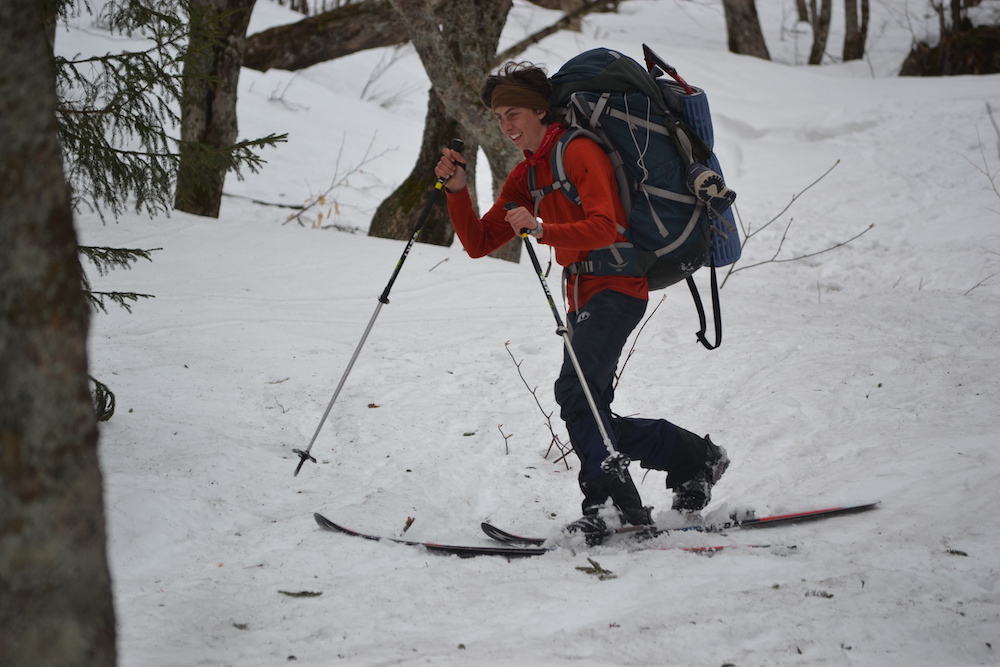 James, showing us that it IS possible to tele turn in variable conditions with a heavy pack

One time we stopped at a little house to buy fresh eggs, and the woman there sent us off not only with delicious eggs, but also a loaf of bread, a bag of sugar, and a gallon of maple sap, which makes a tasty and refreshing drink. We were beyond excited, especially after a long, hard day of walking! Most of our meals consist of rice, beans, and painfully dark chocolate, so special foods such as these are a big treat that boosts our energy and mood. Personally, every time we knock on a door or ask a favor of a stranger, I am always surprised by how supportive and generous people are. It fills my heart with gratitude for what I’ve been given, and it makes me want to pass on the good deed. 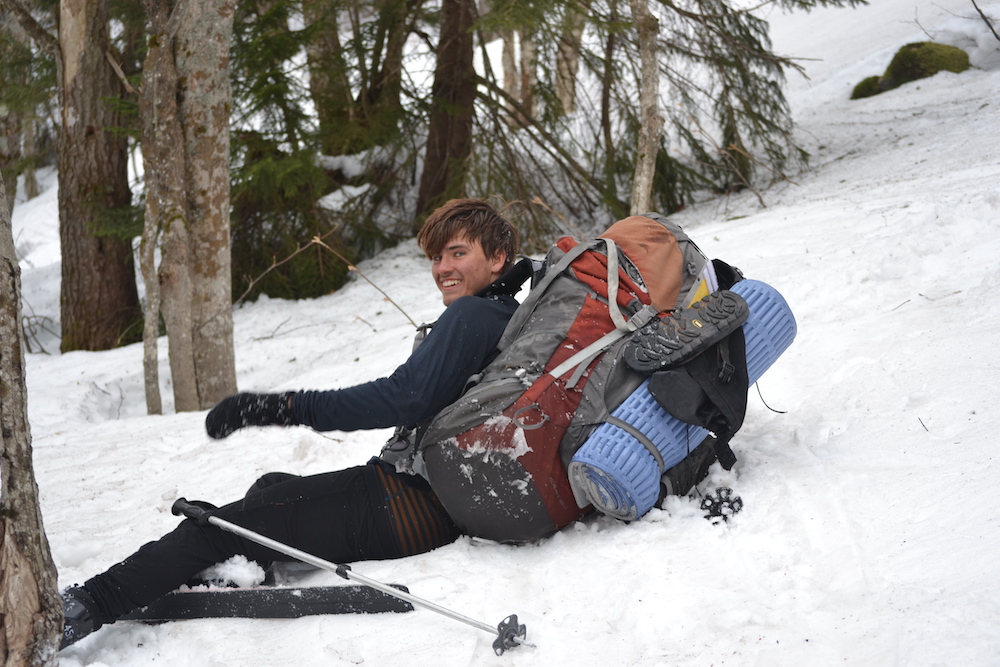 Before saying goodbye for the time being, I want to ask you this: What good deed or small act of kindness can you offer to your community? Whatever comes to mind, I am sure it will bring more joy than you will ever know. Even a clementine can make someone’s day!