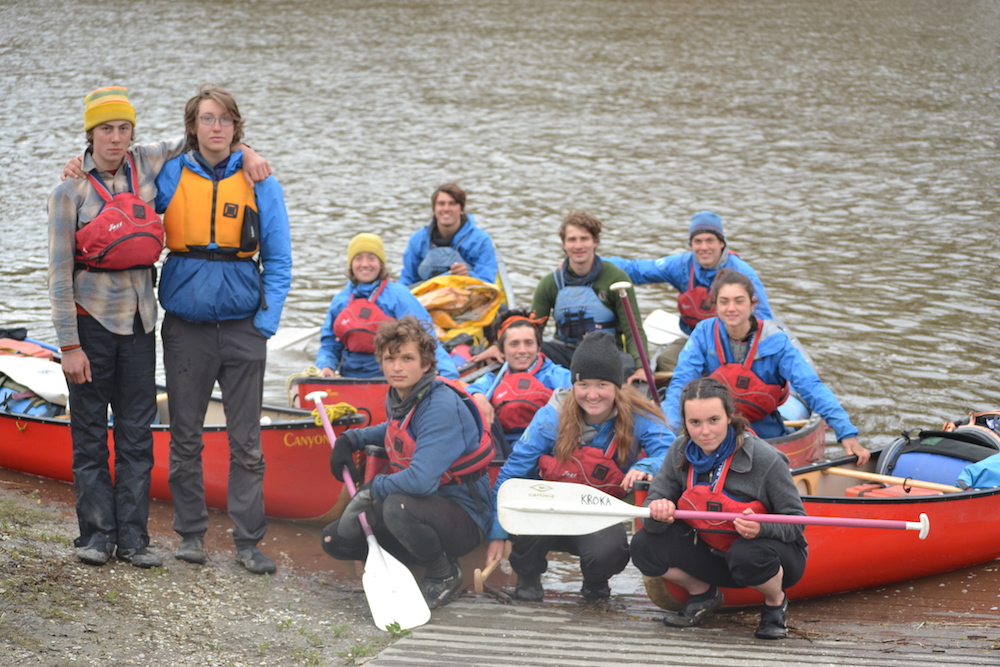 WHITEWATER PADDLING LEG: Northwoods to Swanton, VT
Ahoy there from your swashbuckling crew in Vermont! What a time we’ve had up here, paddling the Missisquoi River and sailing Lake Champlain. The days seem to have flown by in a blur since we departed from Northwoods Stewardship Center, and we’ve had many exciting adventures along the way.

On April 24th we set off in tandem canoes on the river, not entirely sure what to expect in this new mode of travel. Soon we arrived at our first set of rapids. Helmets were fastened, life jackets were tightened, and then we were off! We went zooming along the river under the bright sunshine, gliding through a beautiful mossy forest, and dodging the rocks that curiously peeped their heads above the surface. We did surprisingly well for what little practice we had beforehand, and though the majority of us ended up flipping, most of the tipping took place on the day we went down our biggest set of rapids. 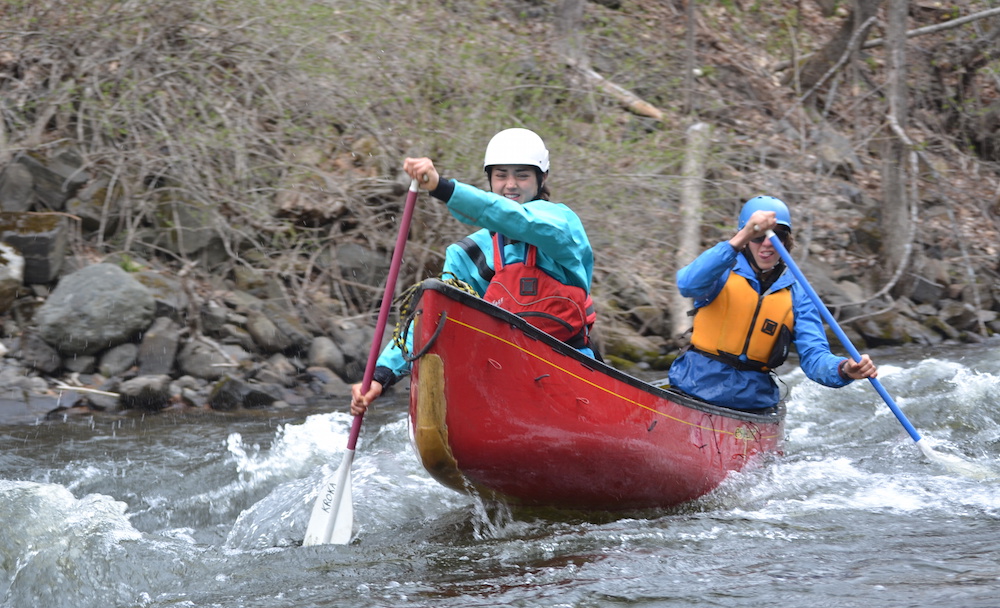 Teo and Rose get some air! 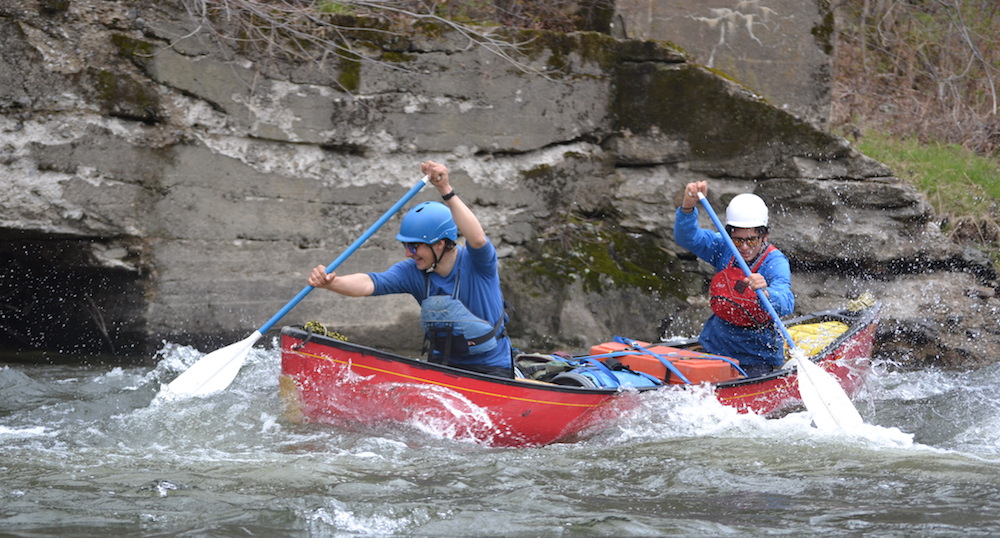 Will and Theo get splashy

We spent time observing and analyzing each of them and approached them with a healthy dose of caution. It was a blast! One with the wetness, we sent it down each rapid, sometimes coming out the other side with shouts of triumph, other times swimming alongside the canoe, or on occasion swimming inside the canoe as it filled with water.

Right-side up, but still pretty wet…

Most of the trip however was spent cruising lazily along the Missisquoi River on a gentle current, swapping stories with each other and taking note of the interesting wildlife that crossed our path. But this wasn’t our only mode of travel: we also had some portaging along the way – the greatest stretch of which took place as part of an adventure race. On short portages we typically take all the gear out of our boats and carry everything, looking like giant fish with legs as we walked with oars over our heads down the road. On this adventure race portage, however, we secured the canoes to the Kroka canoe trailer and set off walking in small groups equipped with only a few personal belongings and our hand-drawn maps.

We hiked down roads, meeting up with other groups along the way and walking a portion of the Long Trail right along the Canadian border. At one point we met a friendly border patrol agent who offered us a ride down the mountain pass of Jay Peak. We accepted the offer and he even turned his flashing lights on for us. We felt lucky to be privileged enough to be viewed with little suspicion by border patrol when others would not likely receive the same treatment. 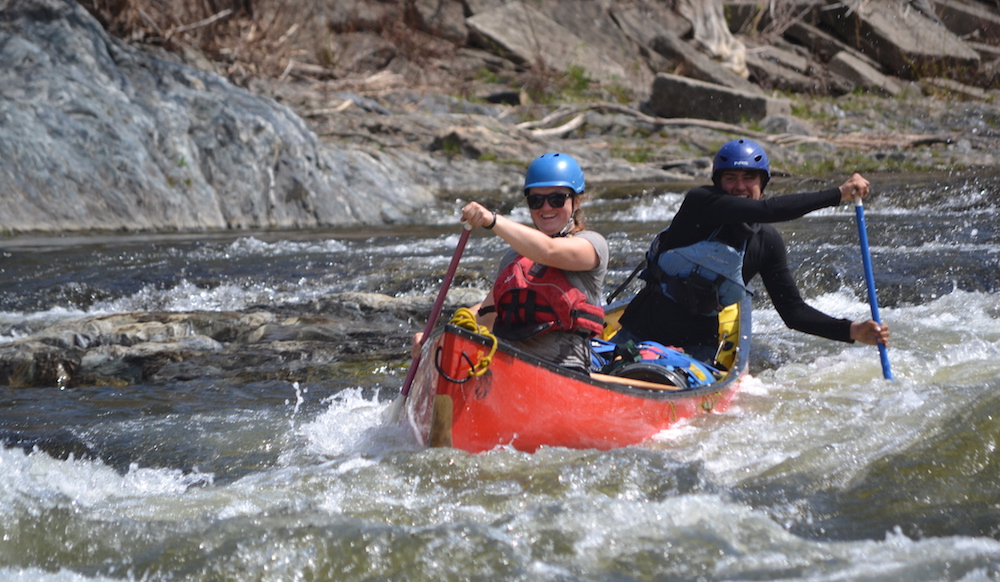 Many of us connected with friendly strangers, asking for permission to spend the night in their barn or shed or yard. The next day we were reunited with our boats and continued paddling. Our time with Misha went by quickly. Each day we set up camp with several four-person tents and one large tarp (sewn by Lissa!). At each camp, we spent time picking up tons of trash – a daily commitment to the earth that was both tedious and rewarding. Another campsite activity was studying The Odyssey, translated by Emily Wilson, which included reading, writing, and putting on skits. 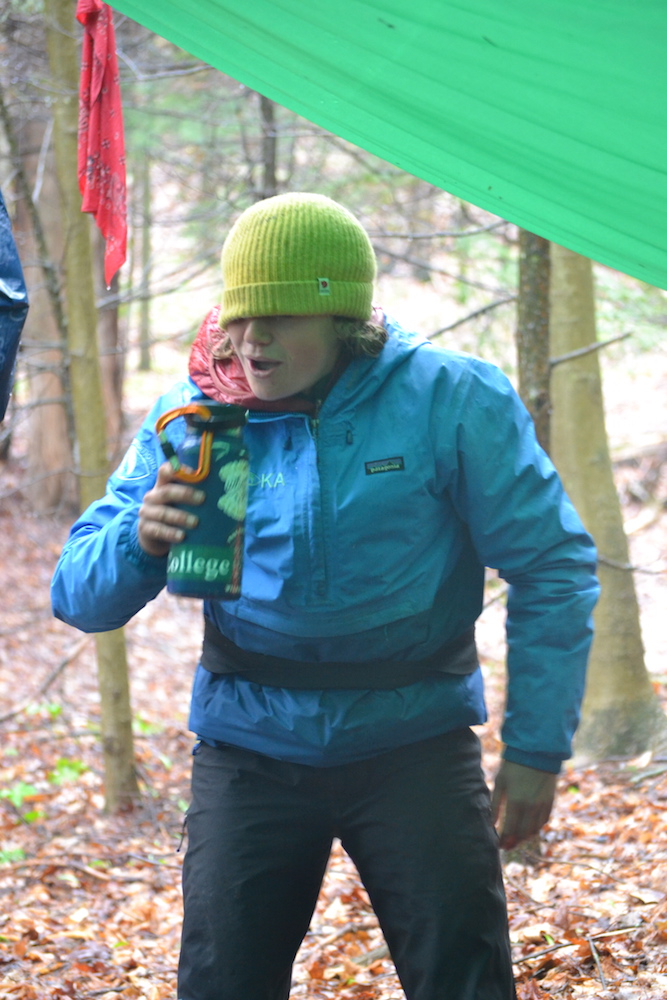 Faith portrays an angry Polyphemus during skits from the Odyssey

After a total of 150 kilometers, it was time to begin our next leg. At Louie’s Landing we met up with Kroka Community School students, whom we had spent time with in January at base camp. This younger group of nature enthusiasts have gone on several expeditions of their own, and have been practicing many of the activities Semester students do daily. On our travels across Vermont we have each been paired as pen pals with one of the KCS students, developing special friendships over scraps of paper and birch bark. On this expedition, each semester student acted as a mentor to our KCS pen pal, guiding them through tasks and group activities, helping them stay organized, and building wonderful memories together.

But with so many people, there was a twist: we had to split into two groups! Before parting from one another we all adopted a second big job so that, for example, we would have a medic in each group. Since I am only able to account for the adventures I have been a part of with Team Kasha, I will leave the telling of the second group’s journey to James, who is their Scribe.

KASHA GROUP – LAKE CHAMPLAIN
Team Kasha was led by two fantastic instructors, Hannah and Rebecca, and included Theo, Sylvan, Lissa, Teo, Henry and I (Faith), with Miriam, Tyler, Wilcca, Michael, Tao, and Desmond as our KCS students. We paddled down Lake Champlain in two wood canvas Voyageur canoes, and when the wind conditions allowed we sailed. This was definitely our preferred mode of travel and included many power naps and sun-kissed noses. We had many fun adventures along the way! 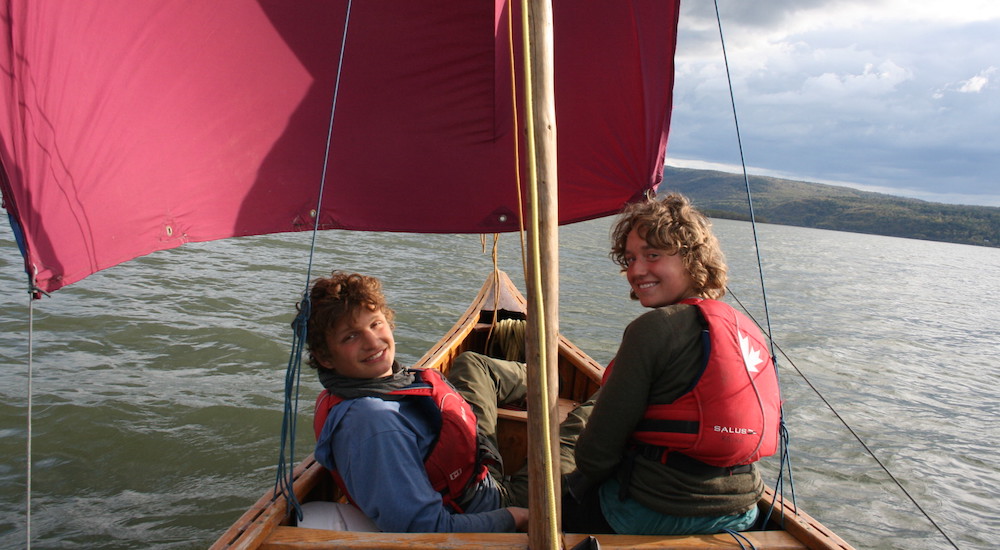 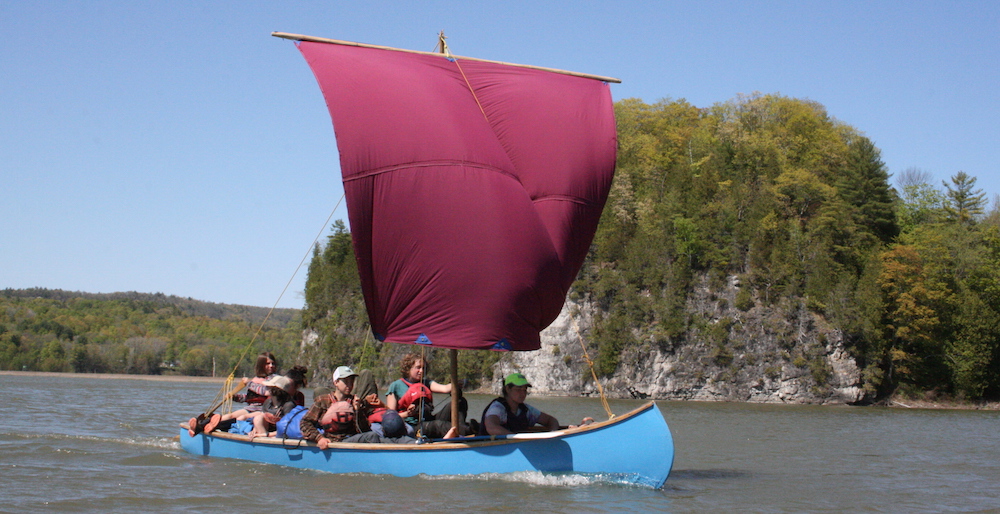 Under even more sail!

Our time with KCS flew by just as quickly as our time white-water paddling. There was the time we had a live-over at Barn Rock and met up with the other group for an epic game of capture the flag, and there was the rainy day on Woods Island when we played all-out games of ManHunt in our small group. There was the time we visited the Maritime Museum and got to see and learn about numerous interesting boats, after which we did service work in gratitude for our time there. All along the lakeshore, we were able to find smooth skipping stones and spent hours throwing them across the glassy silver surface of the lake. And it seemed that every minute of the day at least two of us hunched around Theo’s mini chessboard, locked in mortal combat. What better ways are there to spend the golden days of spring? 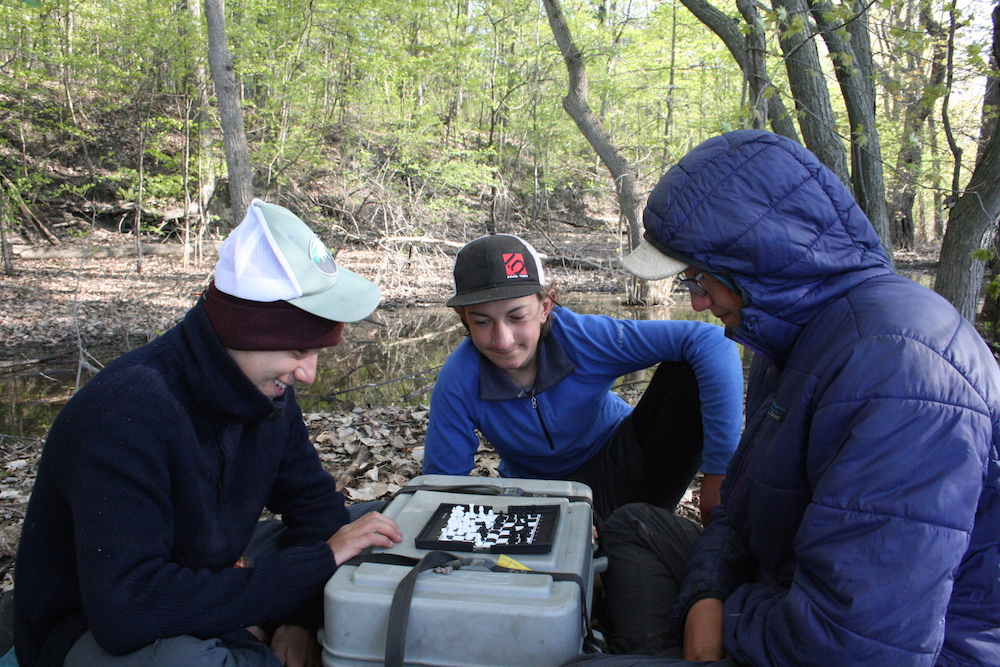 The chessboard in question 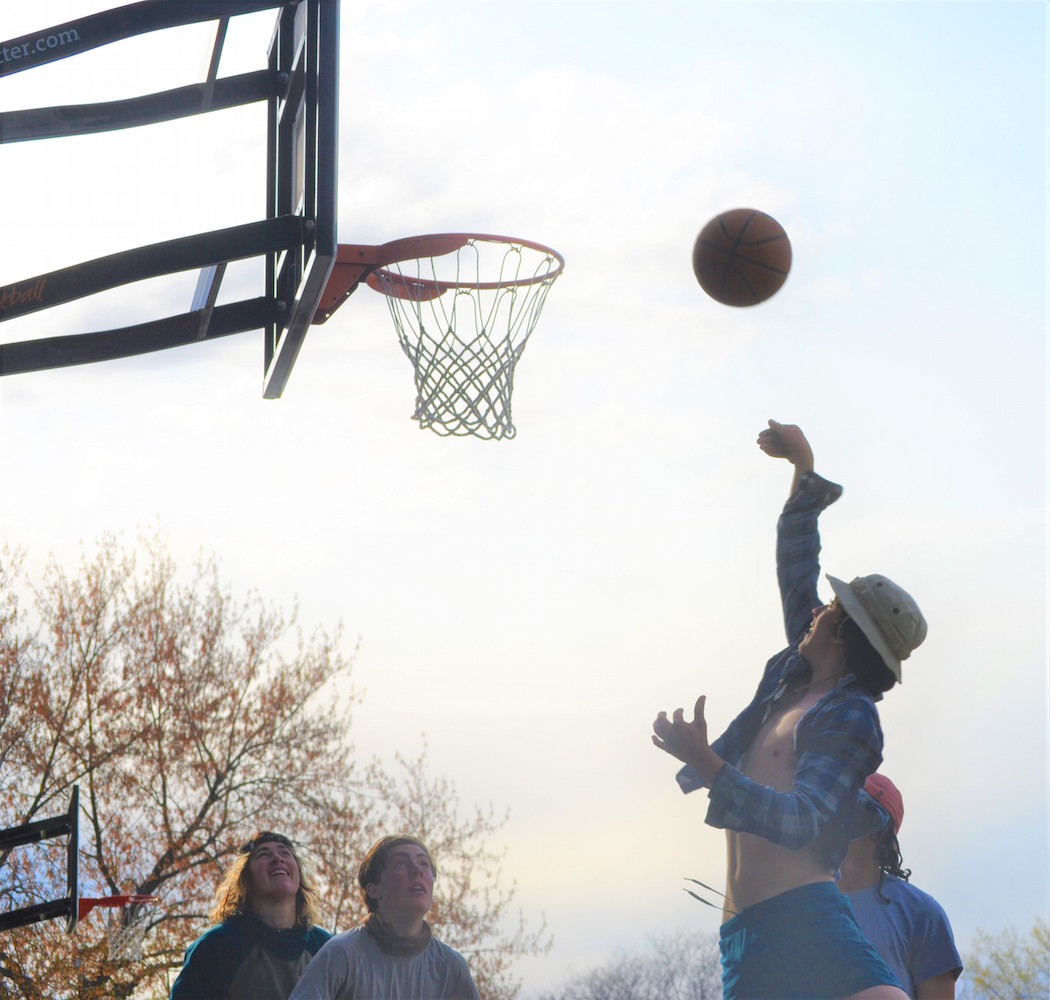 Our fourth day on the lake dawned bright and blustery. We had lived over on Woods Island the day before, but now it was time to move. A strong West wind howled around us and tossed waves into the lake, filling our souls with nervous excitement. We loaded the boats standing while standing knee-deep in the ice-cold water, guiding our vessels over the waves that threatened to swamp the Voyageurs as we loaded our gear. Once we were all set we hopped on in and paddled with all our might to the western shore of the lake where the waves would be smaller. The hull of the boat crashed upon the water as each swell rolled by, and we shivered and chattered excitedly. Eventually, we reached (slightly) calmer waters, and it was time to hoist the sail. It is a nerve-wracking thing to do, as if things go badly the wind could tip the whole boat over – students, gear, and all. But luck was on our side, and after some minor adjusting, we were well on our way. 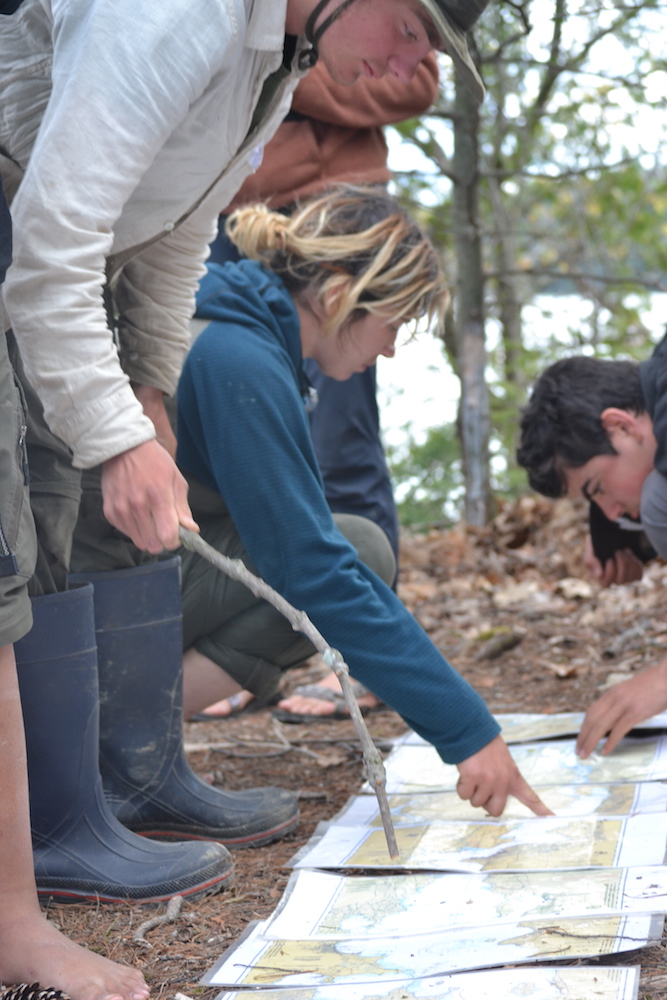 Somehow or another we ended up covering 50 kilometers (about 30 miles) that day! After many songs, jokes, and laughter, the twinkling lights of Burlington came into view, just as the sun was dipping below the horizon. Sylvan’s parents welcomed us ashore, fed us a warm meal, and let us stay at their beautiful home. Our heavy bodies crawled into sleeping bags around midnight – our longest day in a long time. We woke up late the next day but were excited to explore Burlington. Each KCS student was paired with their semester buddy and another buddy pair to make groups of four. We had the freedom to explore Burlington and Sylvan made us a scavenger hunt to learn about the city. Sadly, after two hours of exploring, it was time to pack our boats and get back on the lake. After sailing for three hours and realizing Burlington was still in view it was time to power paddle to camp with the setting sun (déjà vu). We docked our boats on a rocky shore by Shelburne Orchards. 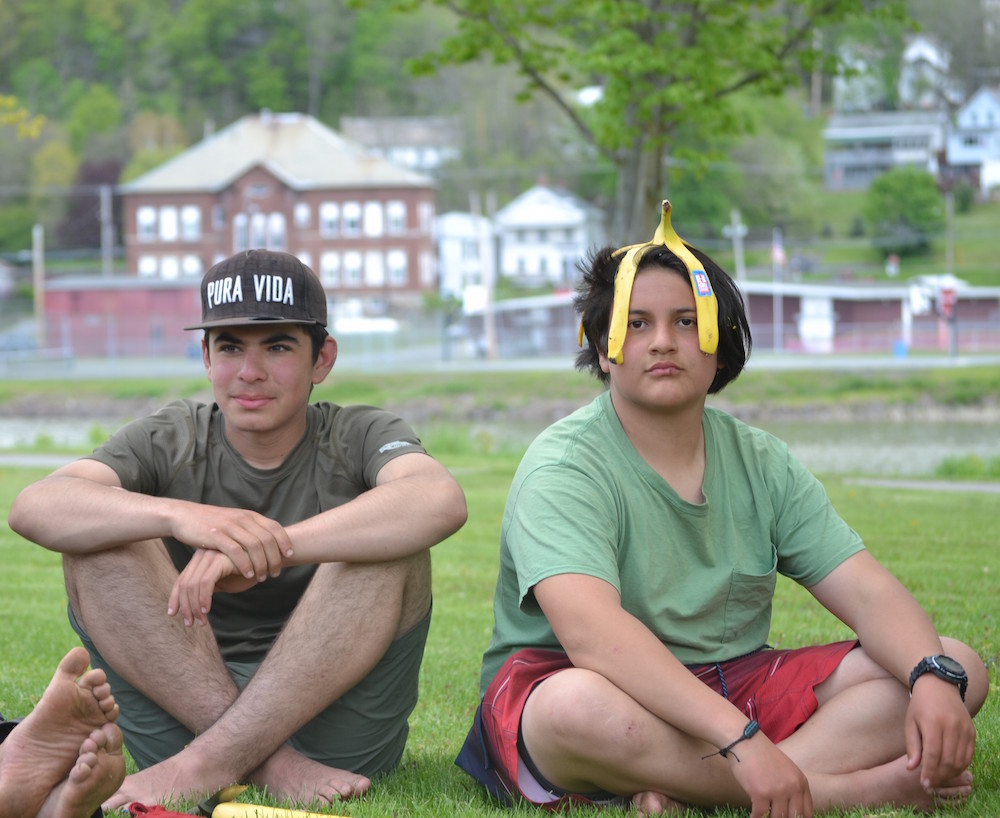 This trip down Champlain has brought to light how without the help of strangers this expedition would not be possible. The amount of kindness we have experienced has overwhelmed us, at times, and is very much appreciated. We received gifts from strangers time and time again: places to stay, fresh drinking water, a freshly baked batch of chocolate chip cookies. We know we will have many more friendly interactions like this in the future, both on our bike-packing expedition and after. As we bid farewell to KCS until our return to base camp, we hope this view of the world has rubbed off on them. The goodness in the world is there to find for those brave enough to seek it. 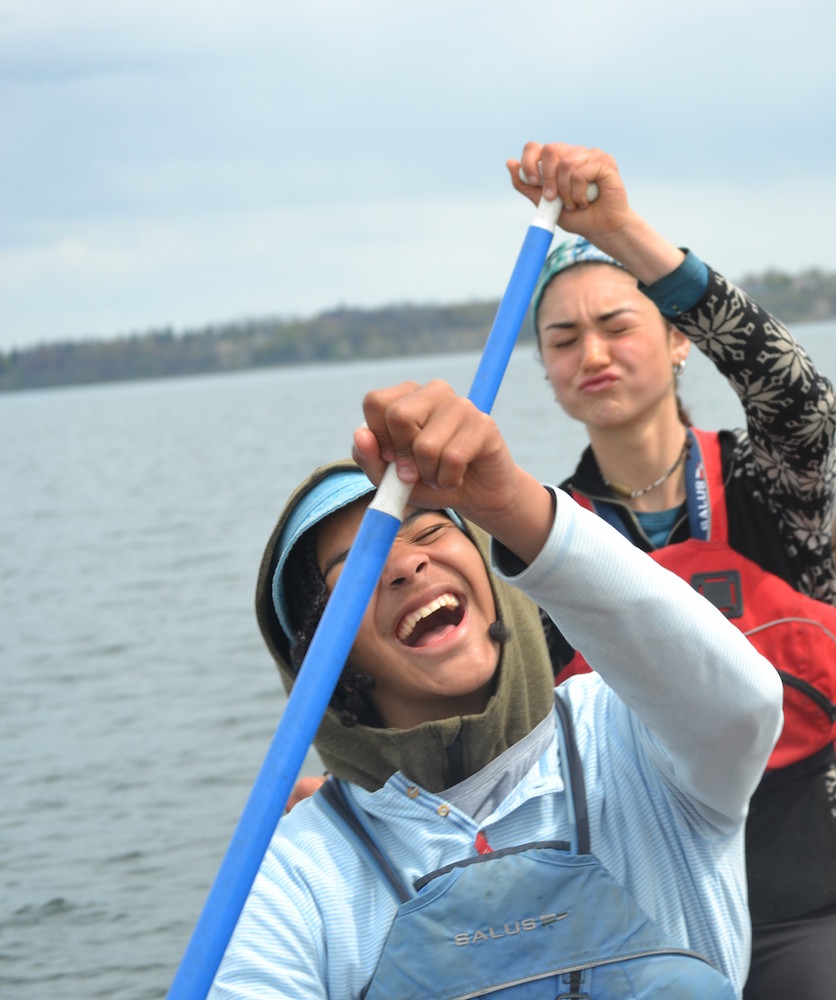 Different attitudes towards paddling all day:

CHAGA GROUP – LAKE CHAMPLAIN
A lot has changed since the last blog post! The trees are green, the days are warm and sunny, and we have switched out our tandem canoes for 7 person voyageur canoes. Since the end of our river trip we have been travelling in two groups, each group with half of semester and half of community school, making our way south down Lake Champlain.

After a hectic shuffling of people and gear at the end of the Missisquoi, we (Evan, Lael, Rose, Will, and me (James)) got on the water with our new instructors, Zoe and Ellen, and our group of KCS students: Sadie, Zach, Violet, Ali, Max, and Masai. The first night we ended up camping in the backyard of a very kind stranger, but mostly we paddle from island to island. When the North wind blows we hoist our viking-style square sail and let the wind do the work. For us semester students, this leg has felt like a vacation; now we are living like Odysseus, sailing along the open water and stopping to visit people and places along the way. 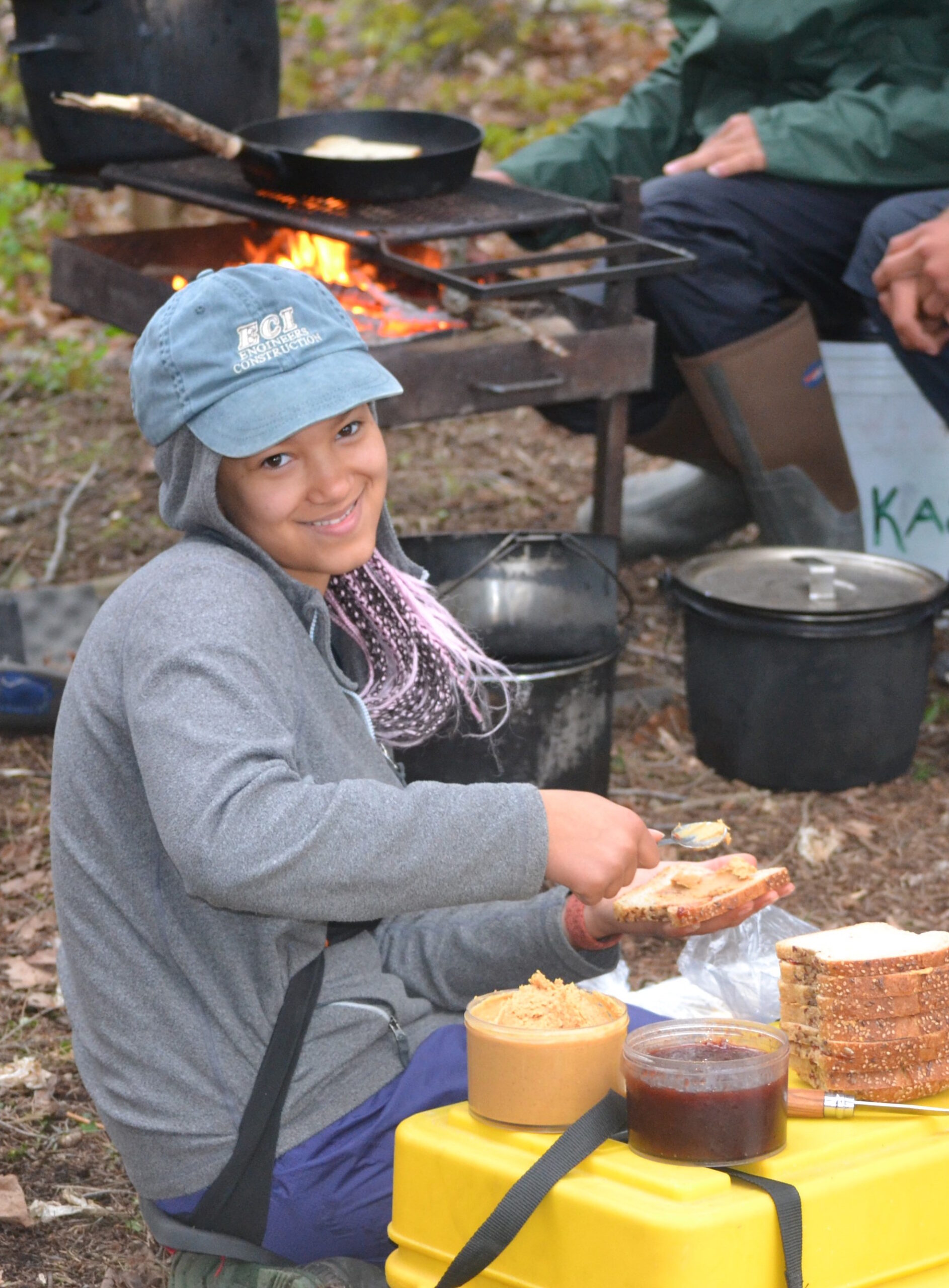 Day five brought us to Burlington, where we briefly saw the other group, bought food, explored the city and tried busking. That night we stayed in Sylvan’s family’s backyard, and had a blast playing basketball at a park down the road. We were off the next morning to Barn Rock on the New York shore, where we spent two days crafting, swimming, and playing games. 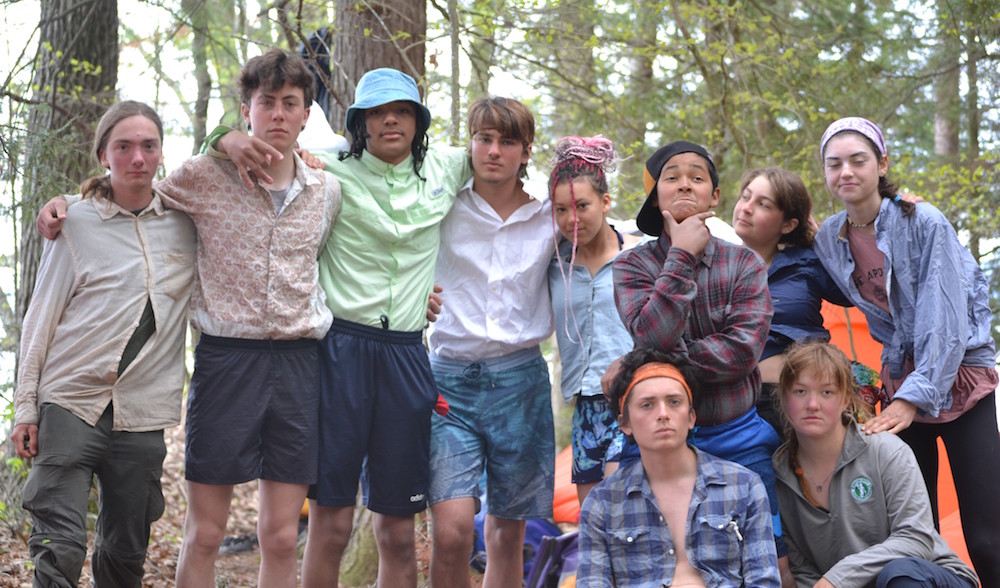 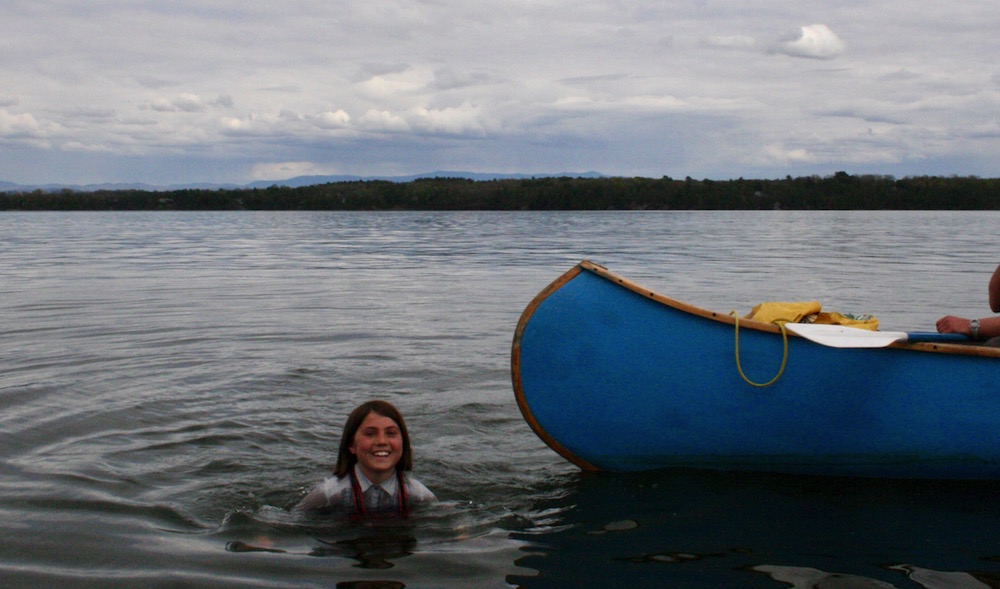 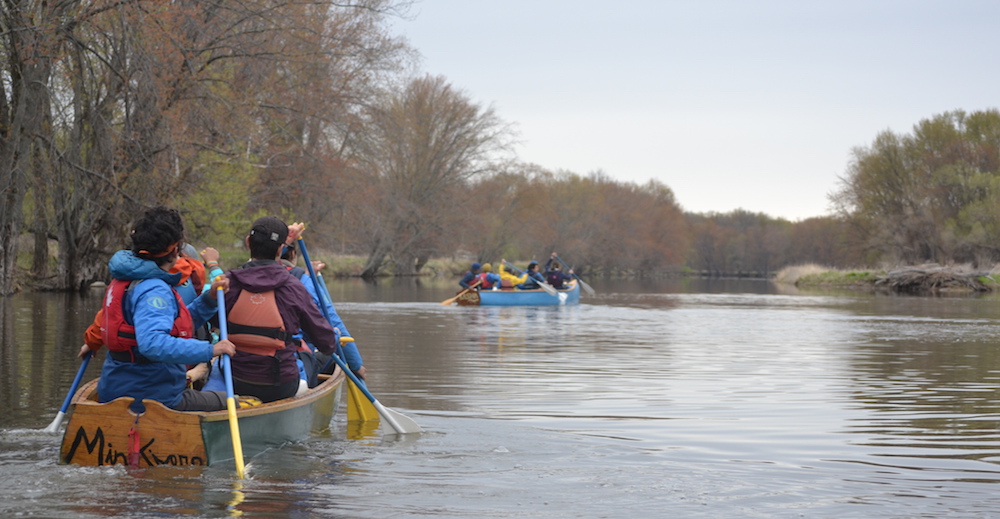 As we traveled south, we watched the lake narrow into what seemed more like a river as it made its way to the town of Whitehall, NY, the end of our journey. Now we hop onto our mountain bikes for the last leg of expedition, but we won’t forget our long days of singing in the boats, skipping stones on the smooth water, and soaking up the sunshine. 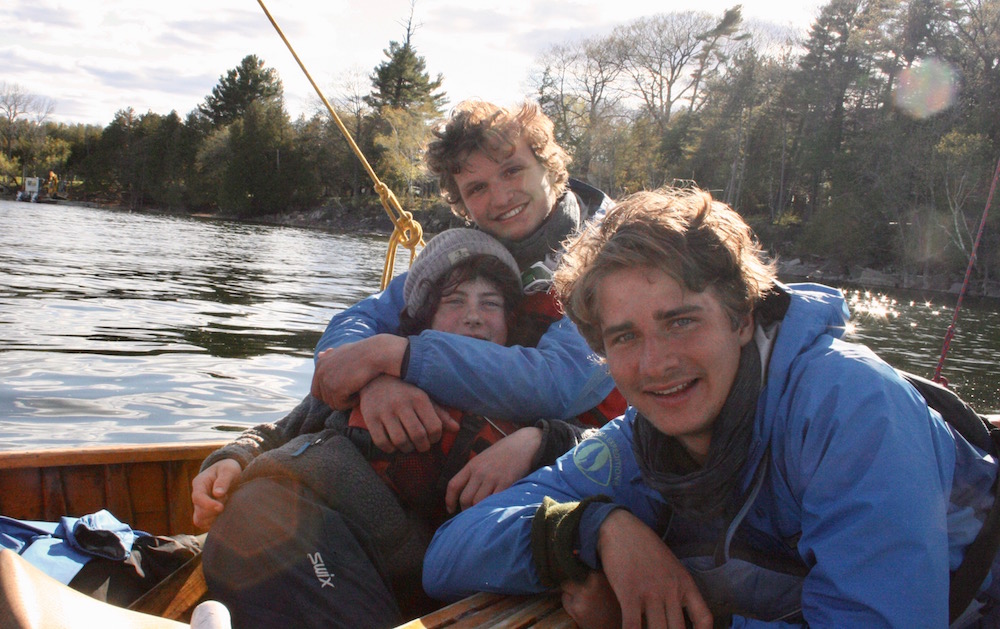