On November 3, we put on the Colorado River at Diamond Creek to paddle the final 50 or so miles before Lake Mead. As we were getting set to launch, Misha and Lynne pulled up in a little car. On their way to Mexico, they said. They missed us, they said. 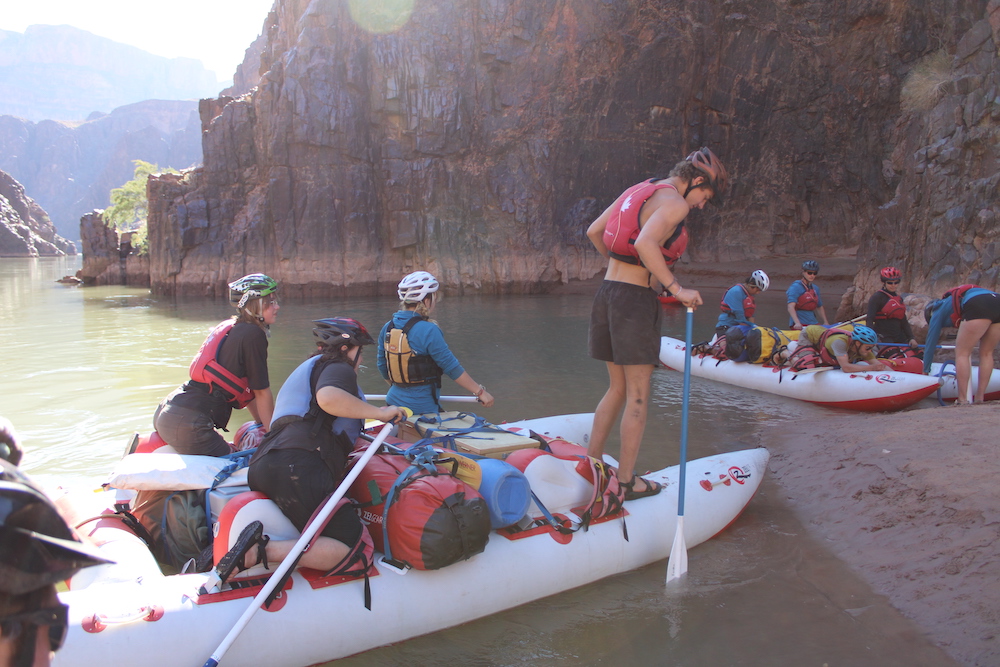 Ready to embark on the Colorado River from Diamond Creek

On day 2 in the Canyon I was lucky enough to take an inflatable ducky kayak. Aeron was paddling the other one. Setting off, I caught the bubbling surf waves, spinning and laughing, and laid down on the back of my boat to stretch my hands up to the sky. Maneuvering the rapids I felt like I was still mostly at the mercy of the river. 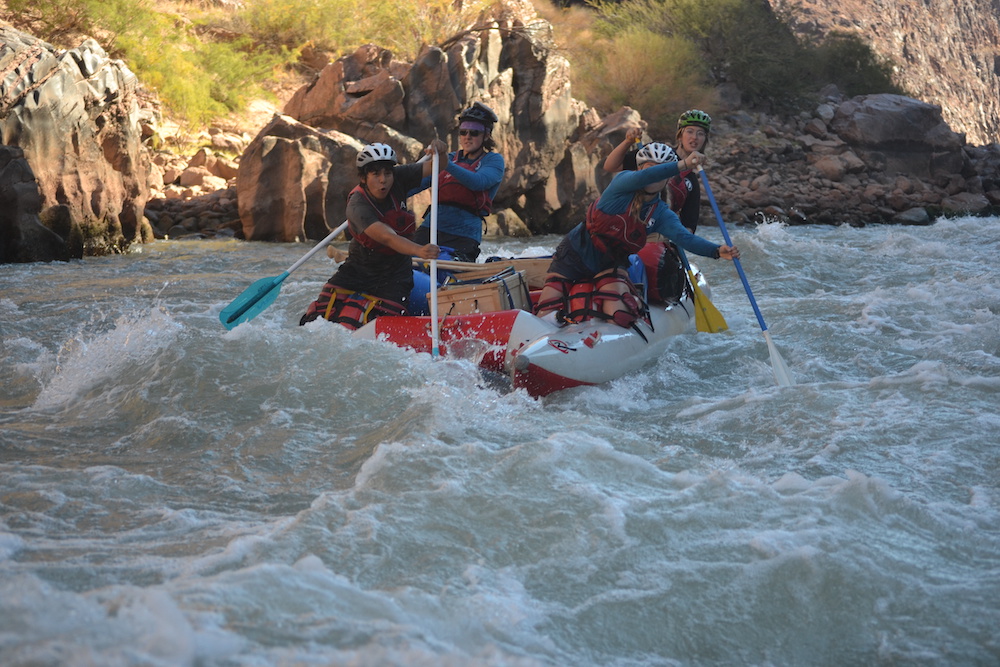 Sloping down into that river I became a part of it, disappearing into the mountainous waves. In our first huge rapid of the day I saw Aeron breach a wave taller than me! When it was my turn, I flipped to the side dropping out of my boat into the churning water. 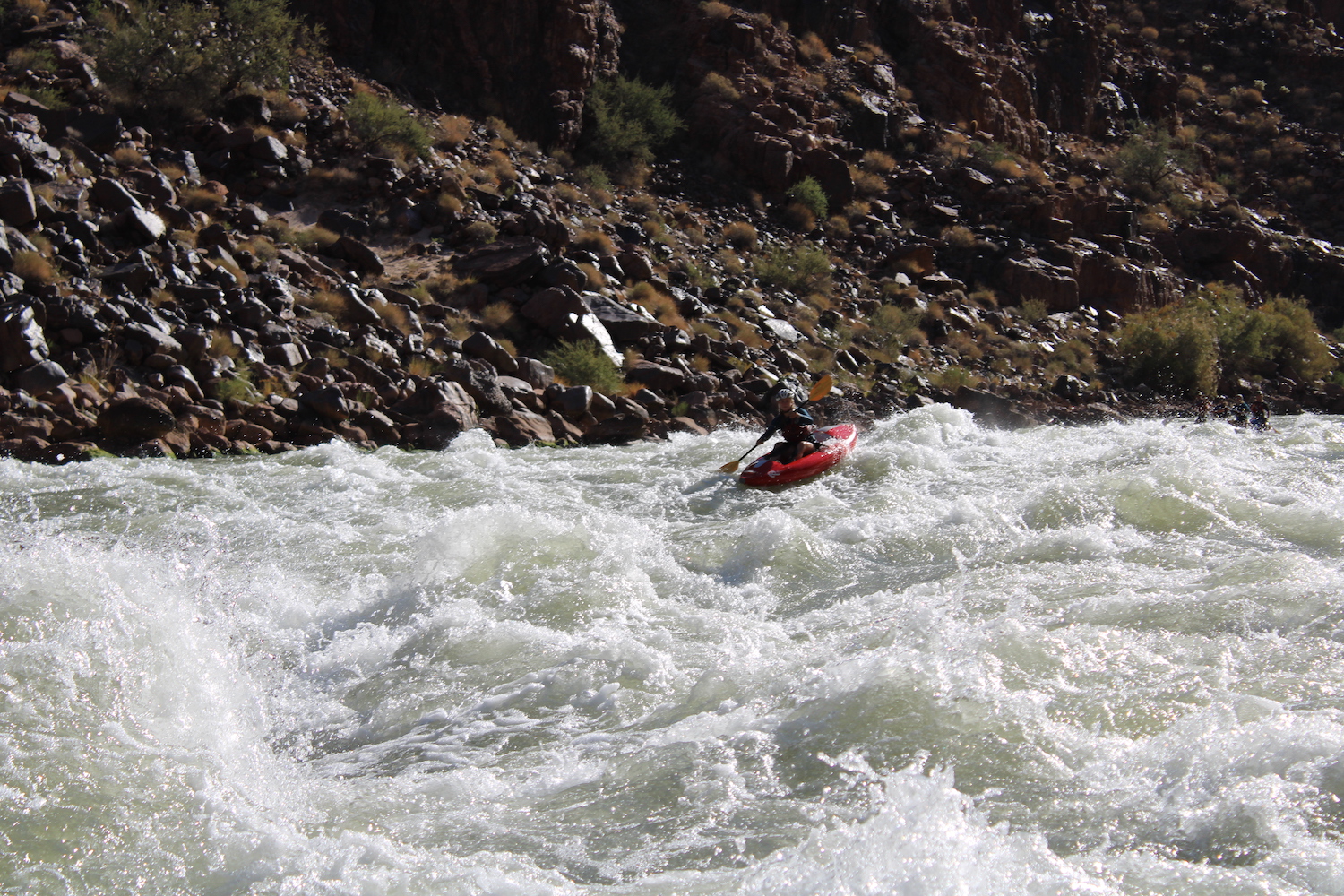 This river is unlike any I have paddled before. Constricted by the canyon walls, an unbelievable amount of water is pushed through, bouncing off the sides.

I fell into the river, and she played with me and my silly little boat like a rag doll. I was pushed under the water by another huge wave just as I got my boat flipped back over, bidding farewell to the air, the light, and any shred of control I had left, and I felt my arm elongate as I gripped the handle of my kayak, unwilling to surrender her to the current. I flipped my boat over finally and flopped into it like a limp fish, just as James had told me to. To my surprise I still had my paddle clenched in my hand, safe as could be. Gasping and trembling, I spun around, kneeling in my craft, and laughed to high heaven, smiling like a fool. 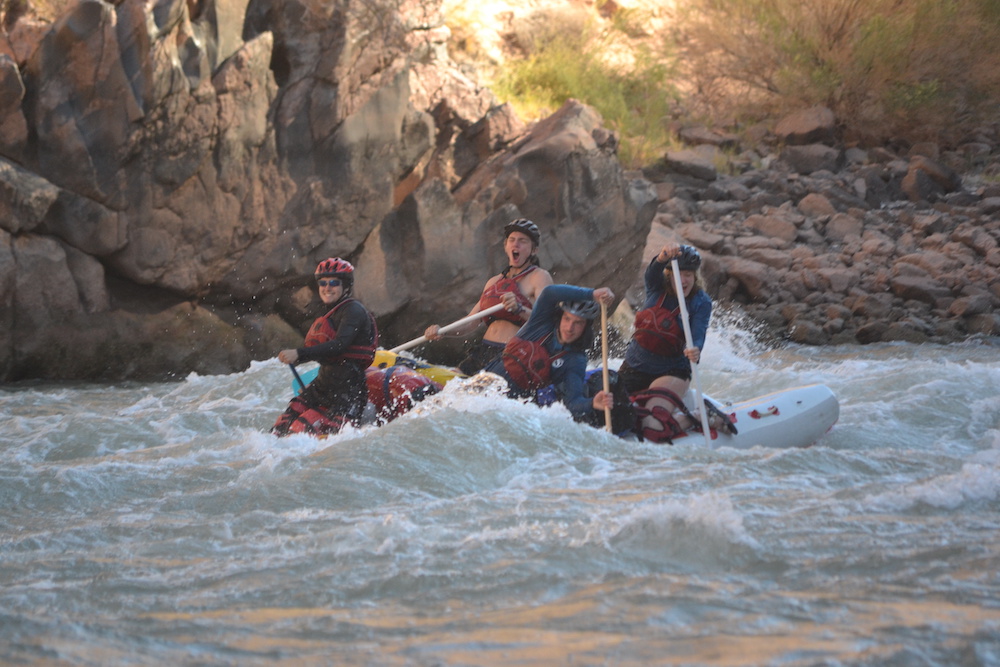 We are adapting to living in the sand without getting it in our food, clothing, and sleeping bags. We are getting better at it. Today we adapted to yoga in the sand, and then we got to submerge in the waters! Some of us lathered ourselves in the mud from the shallows, then swam across the small cove to a rock ledge where we climbed up to jump off! 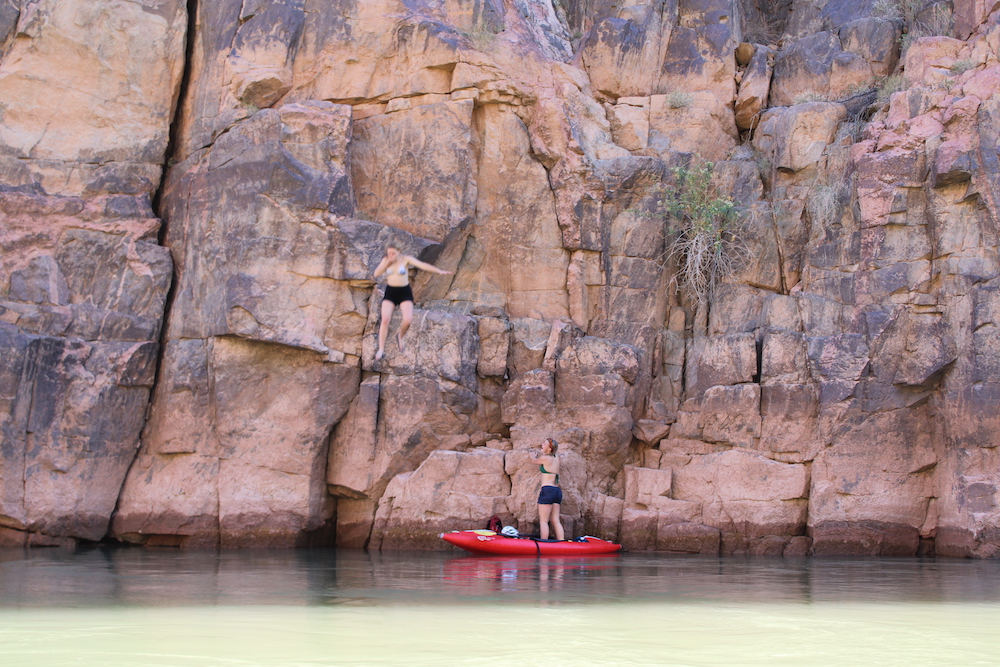 Jasmine and Willow exploring the canyons

It was such a sacred moment to see these canyon goddesses and gods scattered along the cliffs with the water below, sky above, and canyons around. The sun was only shining on some parts of the canyons at this point and the golden color was spectacular. We jumped in and we were so happy! As we ate breakfast, the sun hit our faces one by one, and by the time we found our morning sit spots we were fully radiated in the sun. 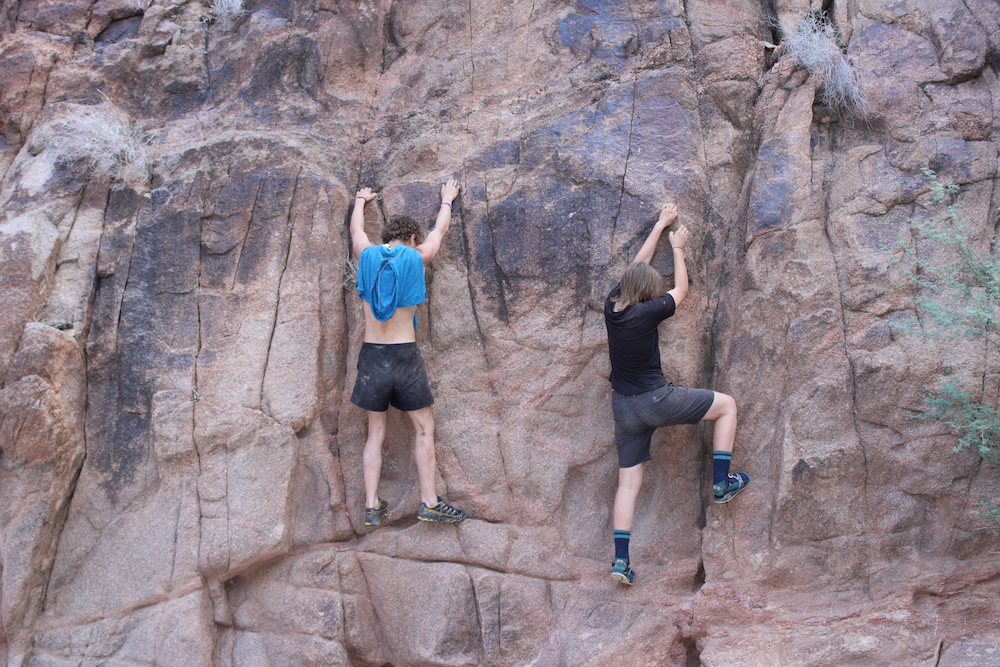 Later, we had a mini math class with Samuel, where we calculated different things about our gas usage on the road trip. Then Ruby taught us many sewing techniques so we could repair our miscellaneous holes and rips in our clothing and gear. 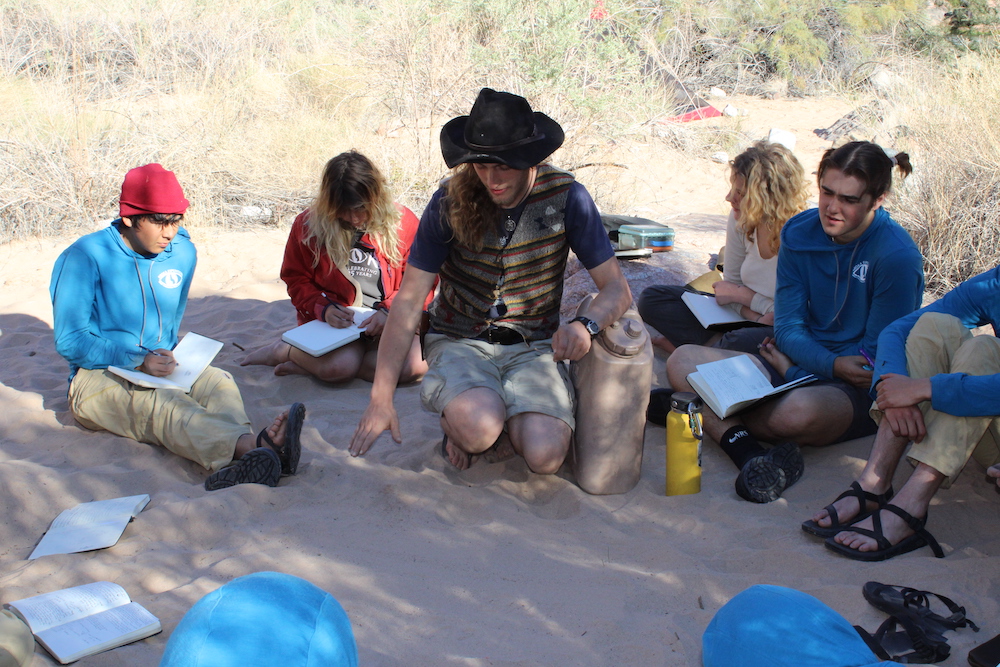 Finally, we ventured off up into the side canyon cliffs to explore! The rocks were loose as we found our way up and the cacti were changing. The echo of our voices was mystical. We had lunch atop a waterfall in the shade: rice cakes with hummus, cheese and sausage slices. We then had an hour to write two appreciations and two constructive feedbacks for each group member. It was very hard as I wanted them all to be super meaningful, so it took a long time. While dinner was being made I took a swim. 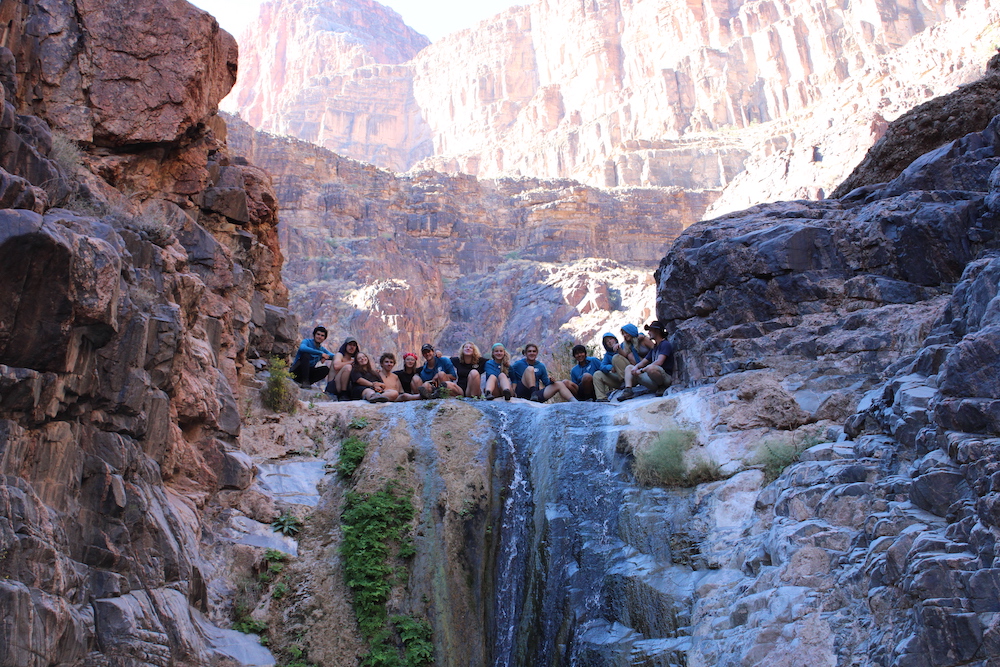 November 6th, 2021, Saturday
Semester day 63
Canyon expedition day 4
Changes in land: River widening. A surplus of butterflies.
Many cacti species (I believe they may be fruiting?)
Lots of bats and even more stars.
Weather: Haven’t seen a cloud in days.
A light breeze through the canyon.
Surprise Canyon camp. 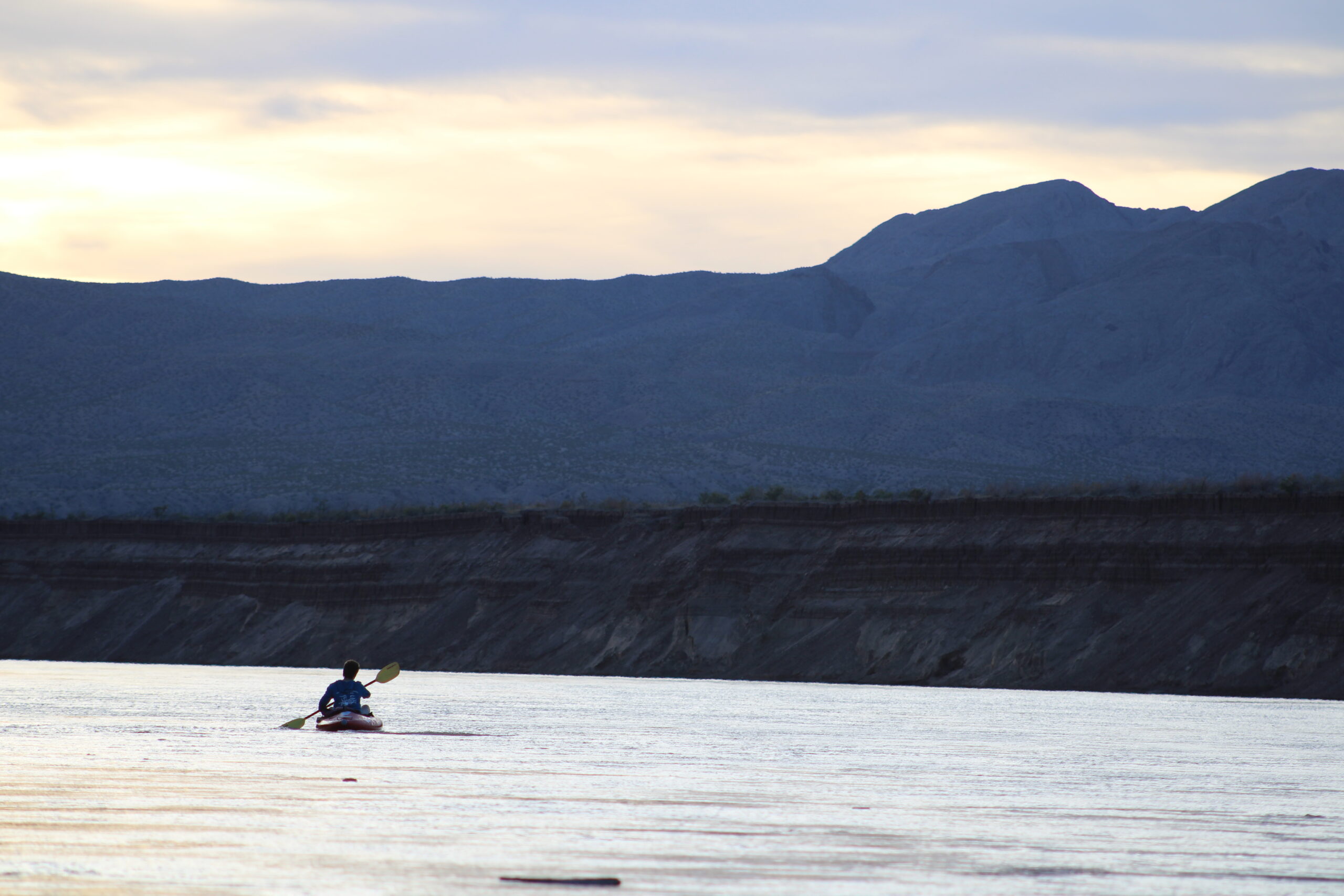 Patrick paddling off into the sunset

For once, dear reader, I am at a loss for words. How can I tell you, how can you know? Start with red. An earthy, living red. A red that encompasses all warmth. A red that you, perhaps were before you were here, before you became. This is the soil and the rock. Now fall into green cautiously, carefully. This green is sacred in a land so dry. Reaching, climbing, prickling, it has adapted to be a teacher of resilience. Now blue, a deep blue, a sharp blue. A blue painted on the plane of the sky. And a teal seeping, swirling like a dragon. 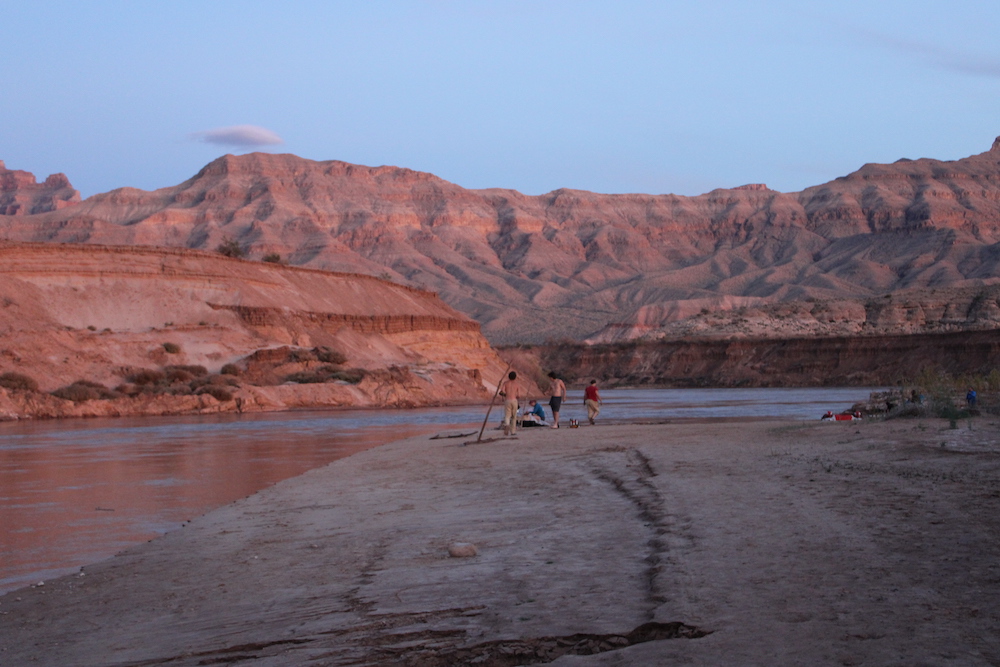 Making camp on the sandy banks of the river

We fell into the magic of the river, surrendering to its deep, rushing power.

A few miles later we pulled out on a sandy camp. I reflected on how I could get so focused on the river I almost forget where we were, only to look up and get hit by it. The canyon, growing towards the sky, the river running deep into the earth, ablaze with power. 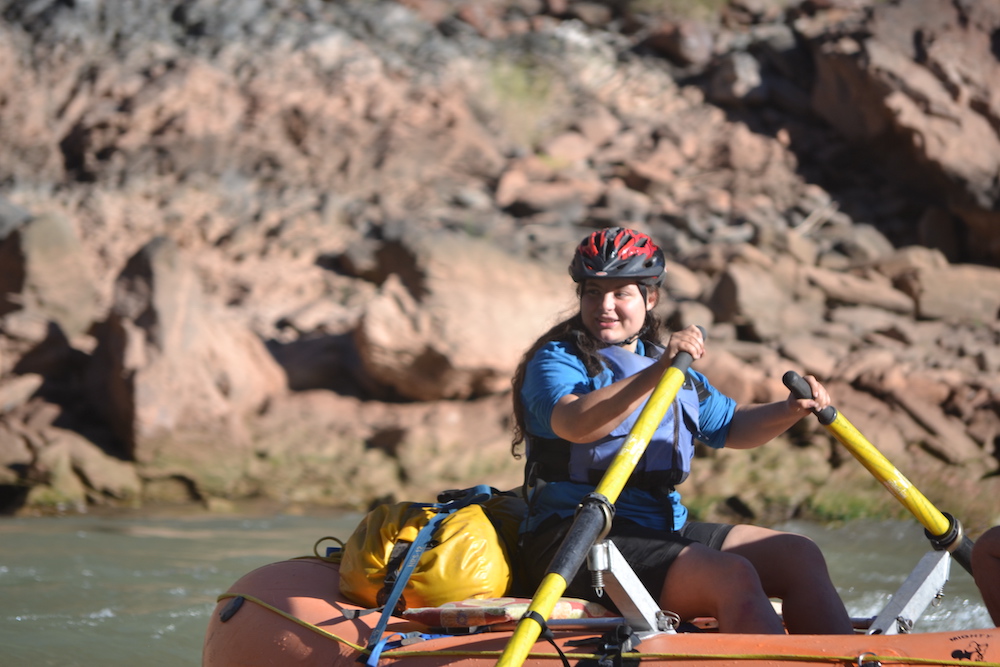 Cecily rowing the small raft and sizing up the river ahead

We explored the canyons with intense curiosity. Something odd happens when you travel, doesn’t it?

A space so new and wonderful that might as well be another planet opens up before you, and you wish to get acquainted with the dirt, the plant life, the cacti that sit upon the rocky ledges as if they are watching us, dancing in the dark when we are asleep. 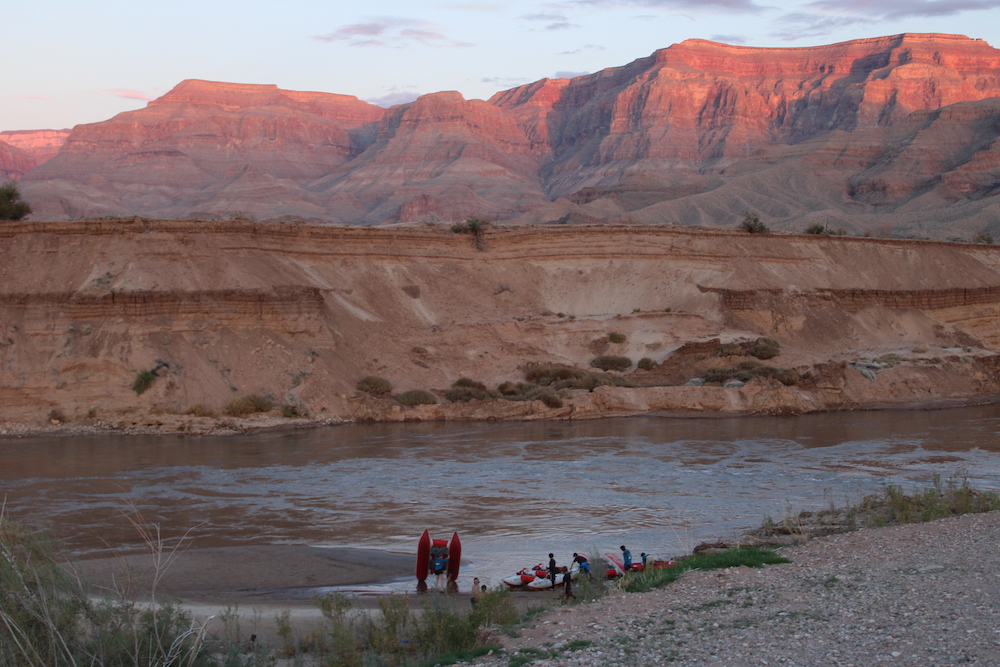 Off the river and into camp

Running, climbing, hiking our way up the arroyos, I was surprised to find green vegetation hugging the water, flowering bushes with bees and thick clouds of small butterflies. The water pooled along the steep slopes, harboring tadpoles and small, feisty toads that hopped about under our feet.

We climbed and reached up to the sky, the power of this land drumming through our bodies. 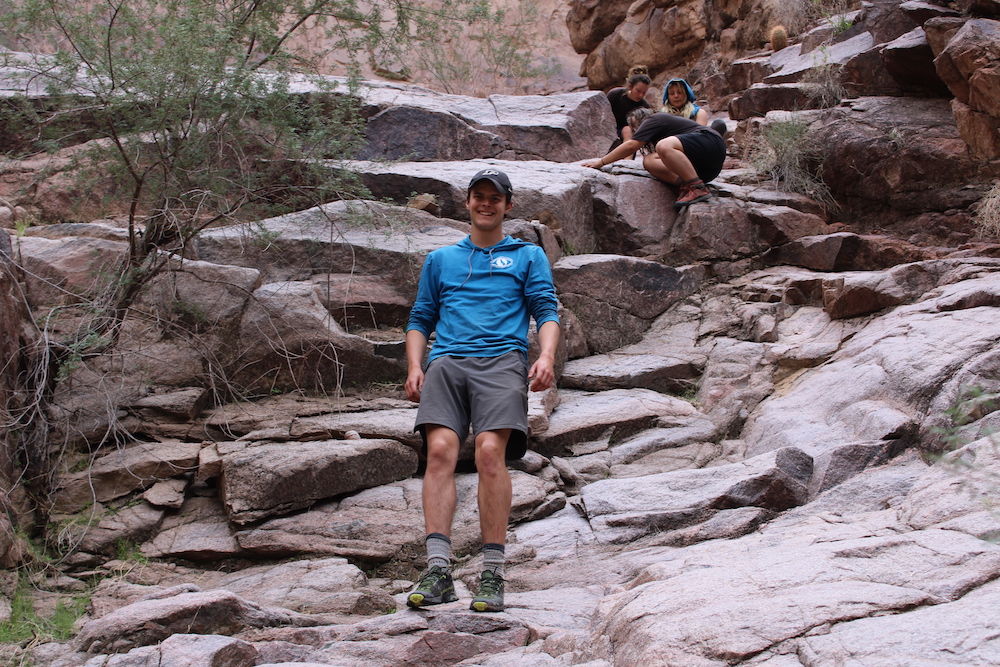 We started reading American Dirt by Jeanine Cummings, a captivating novel that follows a mother and her child fleeing the ever-looming, far-reaching threat of cartel violence in Mexico. So far this novel has helped us visualize the struggle migrants like Luca and Lydia face every day, and the reach of our own privilege. These things happen, regardless of if my mind is capable of comprehending them or not.

To merely feel uncomfortable by the distance of this suffering feels like a betrayal to humanity. Monday November 8th, we woke up with the sun on our faces. The sun. We never rise with the sun. Our suspicions that we were alone were confirmed by this note we found upon the wanigan! 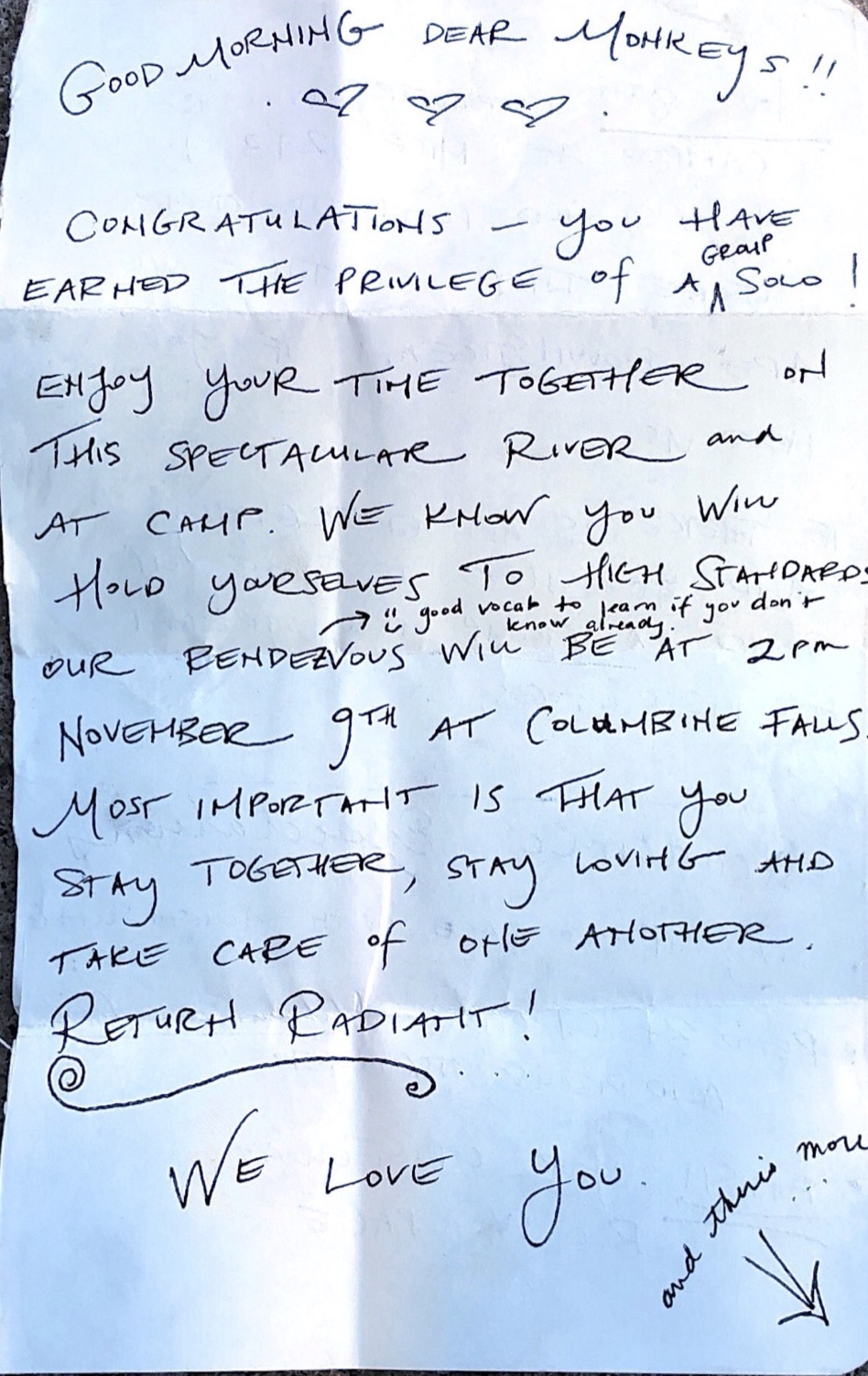 OUR FIRST SOLO! We killed it. We packed up camp, making cheesy kasha breakfast, and hit the river at a leisurely yet efficient pace. We tied our catarafts together and read, voices bouncing off the water like fiddlers’ music. We soaked up the sun and found a rocky camp along the bank of the Colorado. A cave was tucked into the cliff, carved into a long tube-like shape, where water had eroded the rock and a ram skull was nestled into a hole in the wall. We swam and read and worked on our star Book of Wisdom pages to show Samuel later. 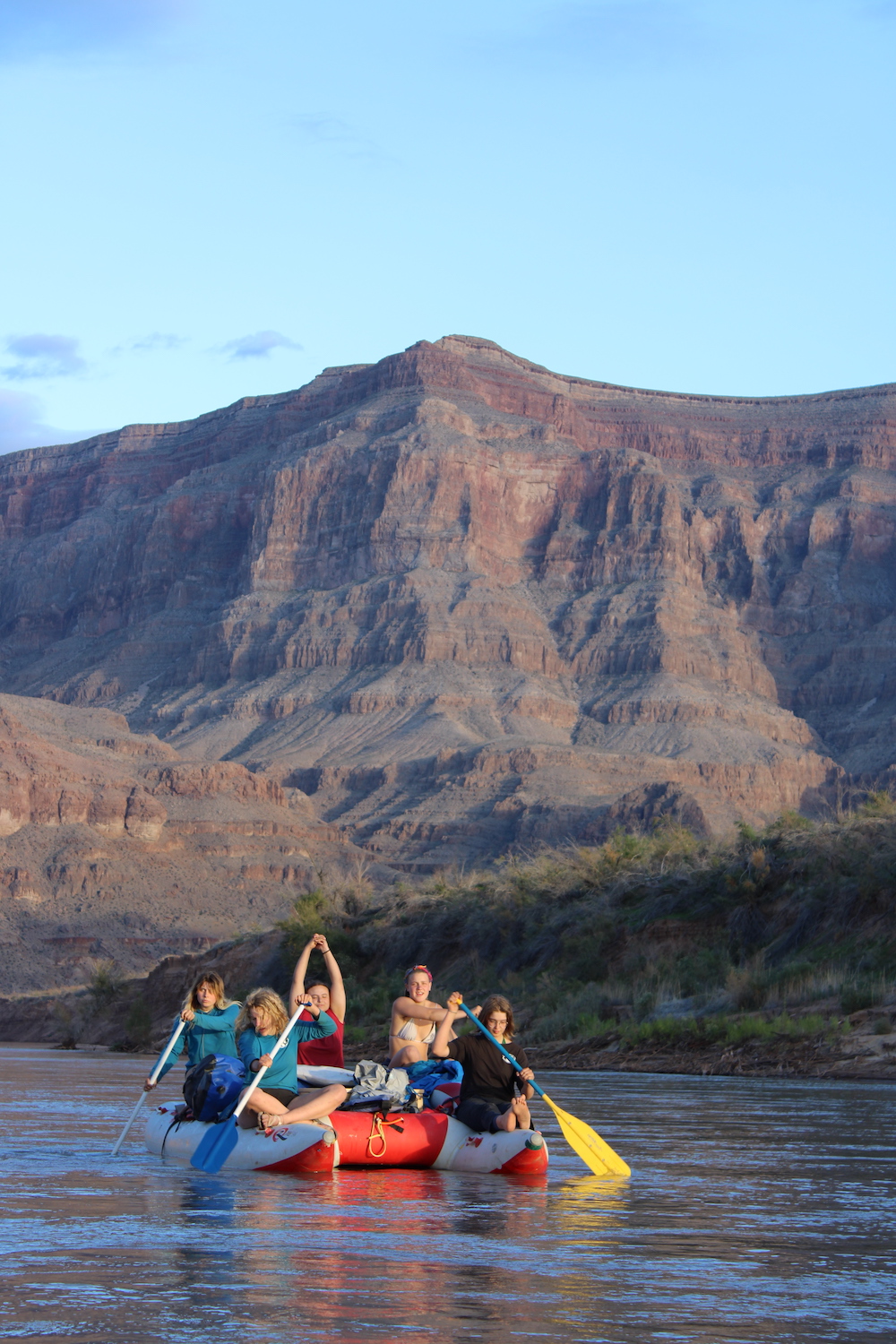 Upon arriving at our rendezvous point at Columbine Falls, we docked the catarafts next to the instructors’ raft, which was left upon the embankment, and set about filling waters, stretching our legs, and spreading peanut butter with sticks over Wasa crackers for lunch. The sun was gentler today, the breeze light, so we were all fairly unprepared as Patrick and Finn came sprinting out of the trees, fleeing the big black bull that tore through the forest behind them. It all happened very quickly, but as the Fall Semester students of 2021 scattered towards rocks and were chased skyward by this giant animal…

it became undeniably clear that we were living adventure!