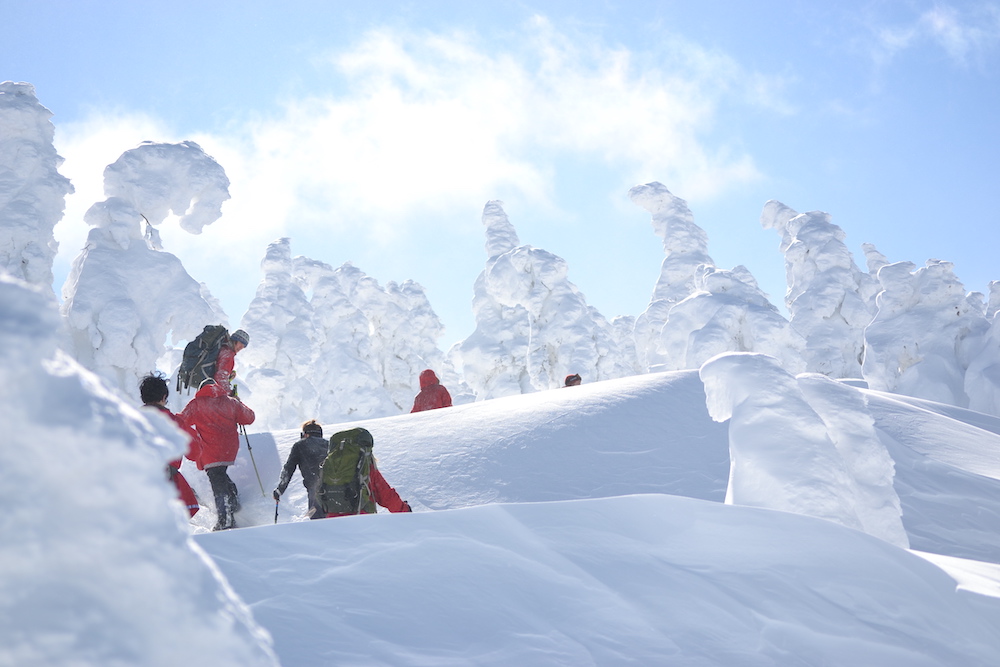 By Semester BlogMarch 15, 2022No Comments 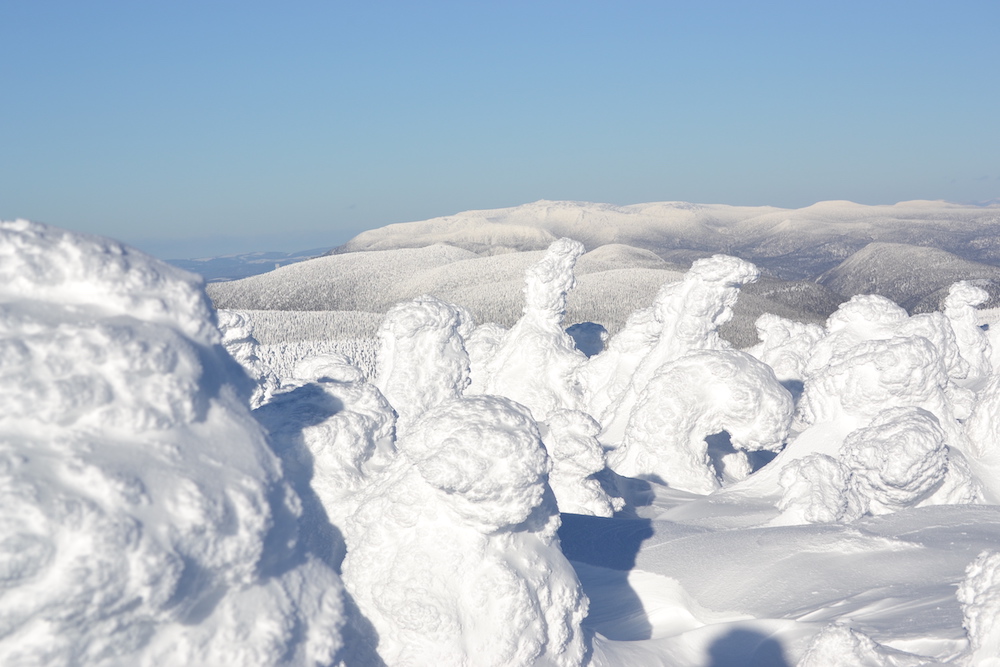 A stretching landscape, vast and white
Glittering in the morning light
Beckon me to pull my feet
Over stretches flat or steep
Past the trees in coats of snow
And over rivers yards below
When the north winds bellow louder
Pulling with it plumes of powder
It forms waves across the lake
A sculpture garden made to break
And hesitant I am to dash
This perfect snow and leave a gash
I accept it as a gift
To be first to cross this drift

Climbing up through the “Cheetos” forest

Hello from Manoir de Sapins, a beautiful hostel overlooking the Saint Lawrence River in Sainte-Félicité, Québec. We spent the last eight days skiing in the Monts Chic-Chocs, where average annual snowfall is six meters and every day is a powder day. We made out camp at Lac Beaulieu up on the mountain plateau surrounded by high, snowy peaks. Some days the temperature never rose above -20ºC, and the wind blew fiercely from the north. Other times, blizzards made it impossible to see more than a few feet ahead, and we had to push for many kilometers on unknown slopes without trails through feet of fresh snow. The steep powdery descents and the countless beauties of the Gaspé wilderness have made our time in these mountains some of the very best days of our lives. 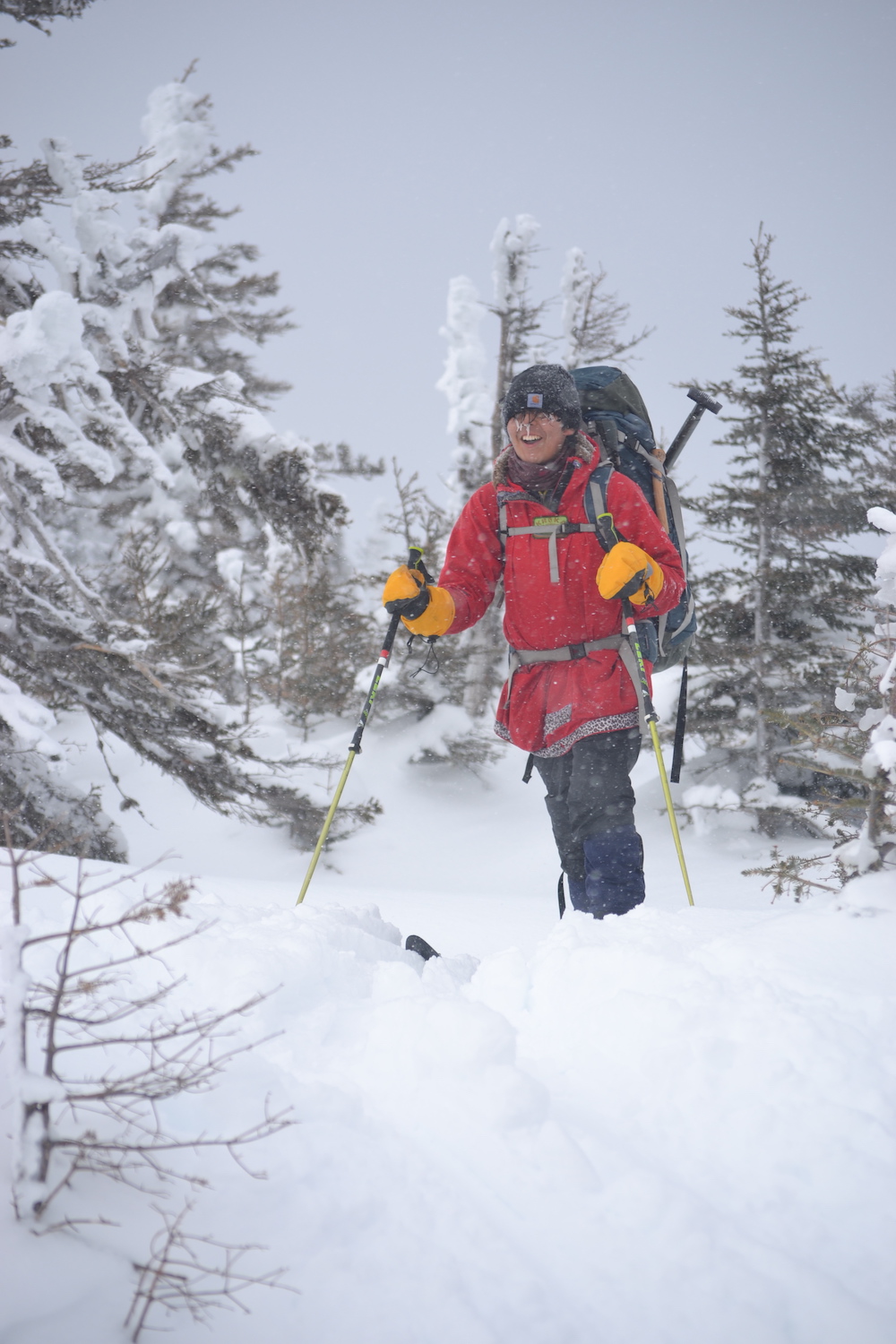 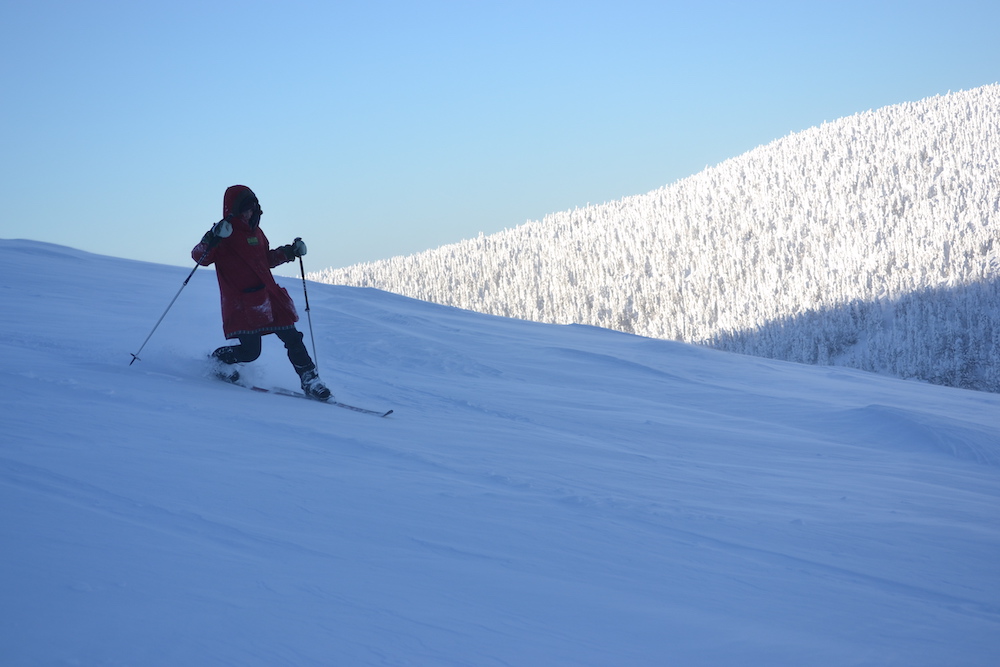 We cleaned our rooms and finalized packing. Breakfast was super cheese kasha. Delicious. Our van ride took us towards huge snow covered mountains. We met our guides from Vertigo who had snowmobiles with makeshift sled carts with seats. We went super fast on the road for a bit and then onto snowmobile tracks. 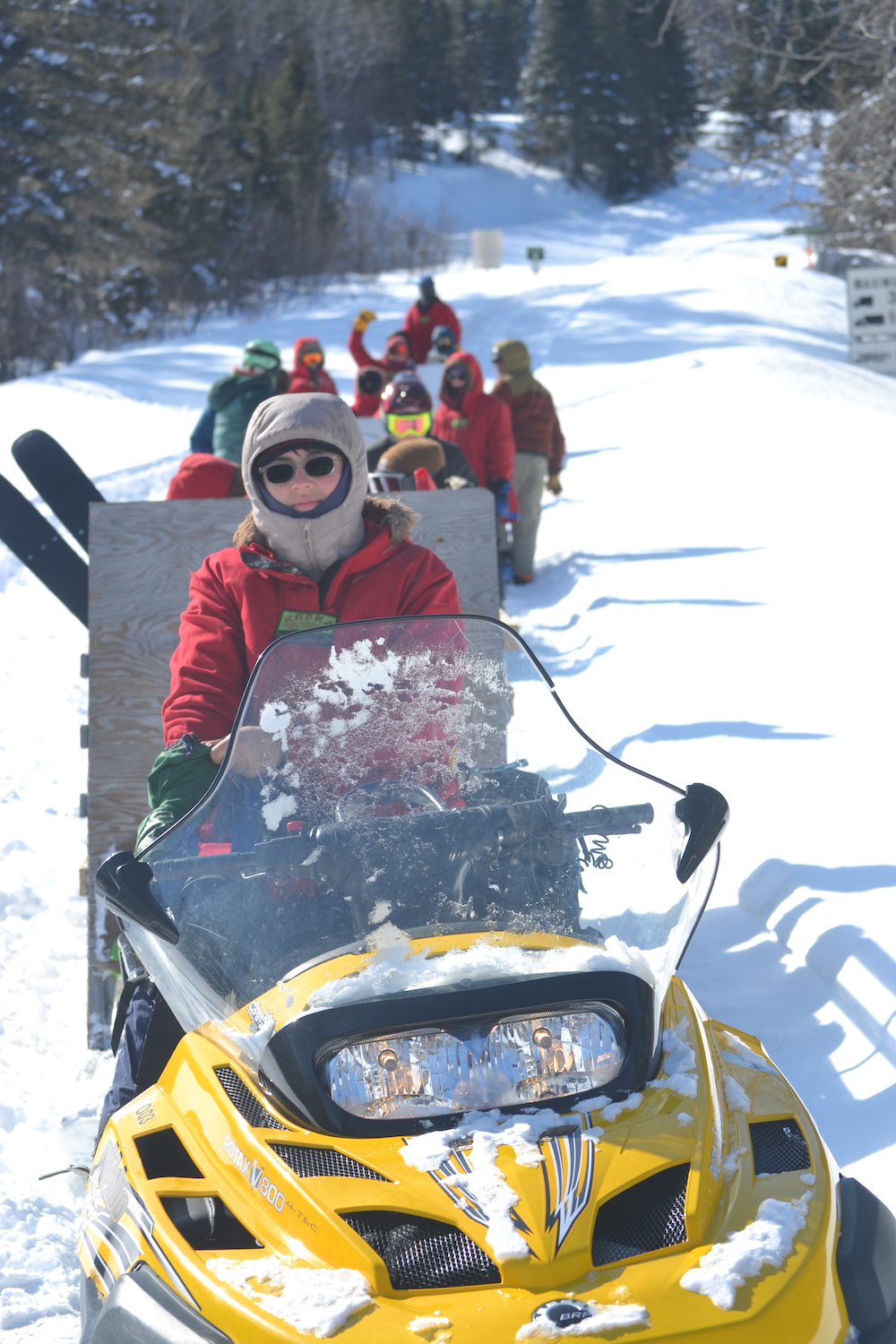 Teresa during Ski-Doo transport into the backcountry

At one point I stood side by side with the driver, hanging on for dear life. We got to jump out of the sled into waist deep powder when the machine didn’t have enough power. They brought us to the base of a huge round top mountain. We put on skins, then made a three track trail for the sled that we were pulling. It was a gradual climb, and I took some graceful spills into the powder. I broke trail for a bit which was super tiring. We suddenly go to a super steep narrow part that took  forever to get up. I went back down to help people. Unexpectedly, we set up camp at the top. Not a lot of resources, but beautiful. 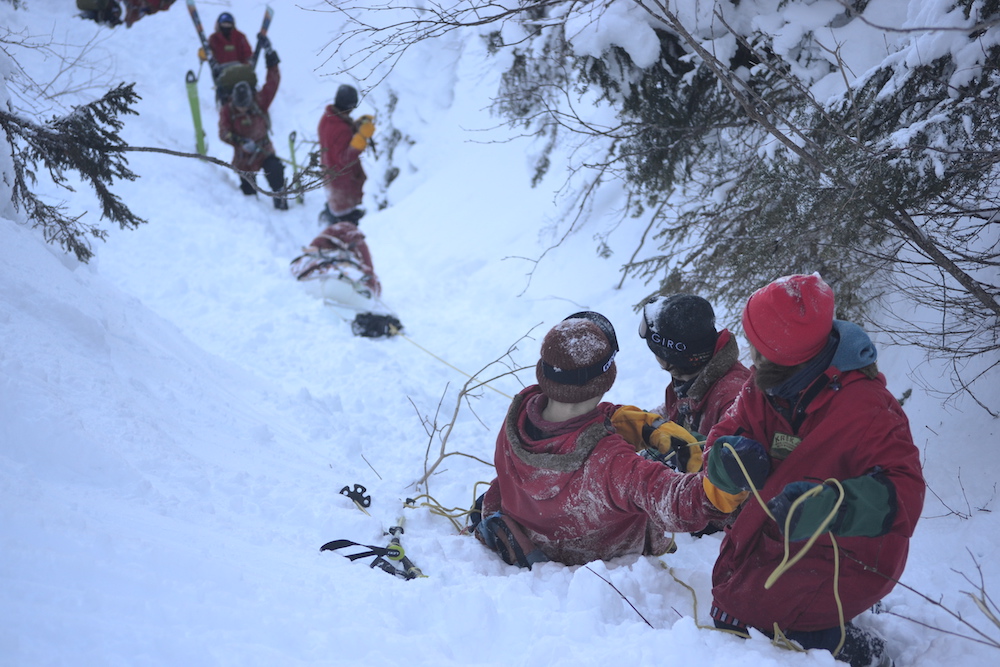 Cracked hands, tired minds
Signs of value added to community
Out of necessity or a call to something bigger than yourself
Scraped knuckles, sore shoulders
It’s the wonder of creating and the joy of accomplishment
The pain feels like punishment
Yet it’s Experience and Will growing stronger still
It makes rest sweeter, friends closer, and contributes to the calling for all
Arms outstretched, mouth smiling
Goodnight, my friend
The work’s not done
I’ll see you in the morning 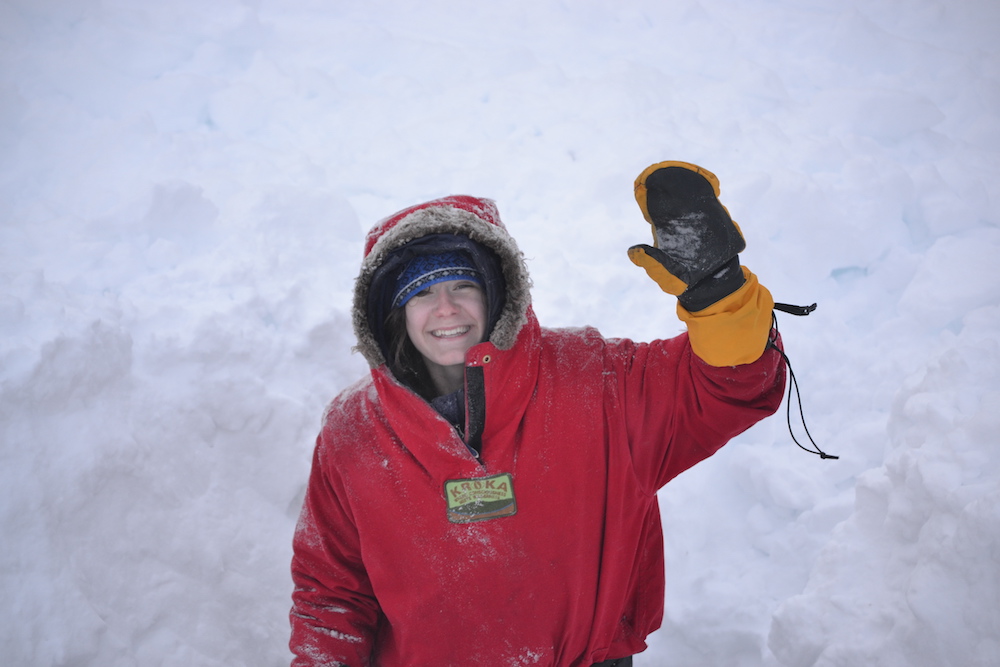 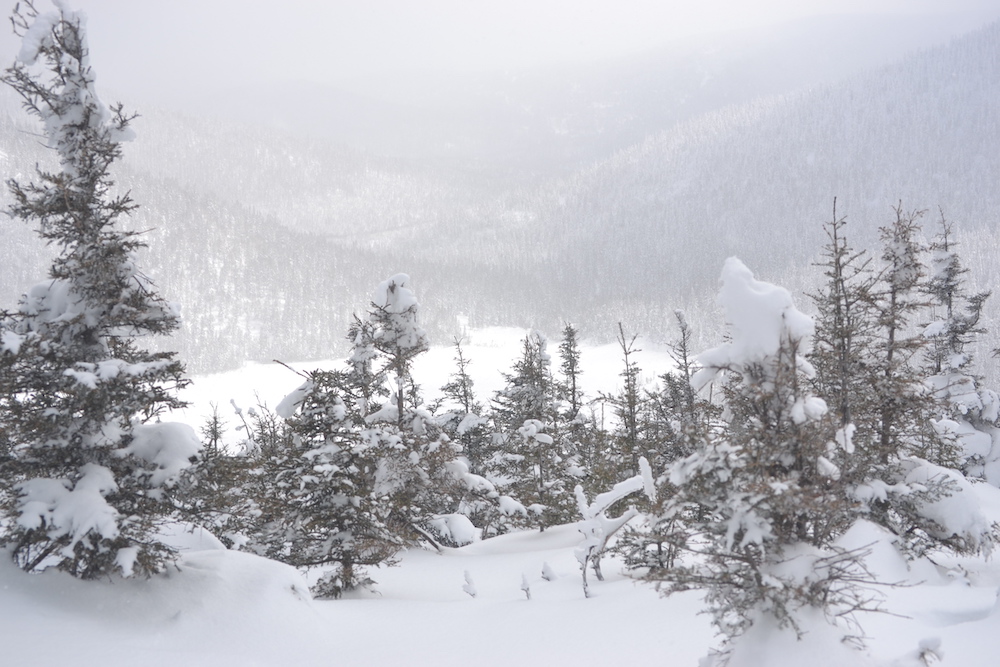 Looking down at Lac Beaulieu

It’s incredible to wake up in a place like this. We had breakfast, then did some academics and read Ministry for the Future. After that, we got navigation assignments and headed out. Noah and I got an assignment to follow a drainage around a 3000′ mountain in a loop. We were traveling super fast and we wanted a challenge, so a one point, we turned straight up to the summit of the mountain. It was beautiful and so much fun. The snow was so deep on the mountain that only the tops of the trees showed. We could see Mt. Blanc to the SW, with others climbing up the bare slope. It was so cool. The trees near the summit looked like they had been sprayed in whipped cream. I could see different figures in them, which was super fun. We also saw a grouse looking like an out of place chicken. Submitted, and we crowned it “Mt. Whip” because of the trees. The descent was amazingly fun, and it was hard to believe that I was actually there, doing this. An absolute dream. We got to the bottom and followed the river back to the lake. Noah and I gathered a couple of big trees because we were the first back, then helped around doing other chores until dark. 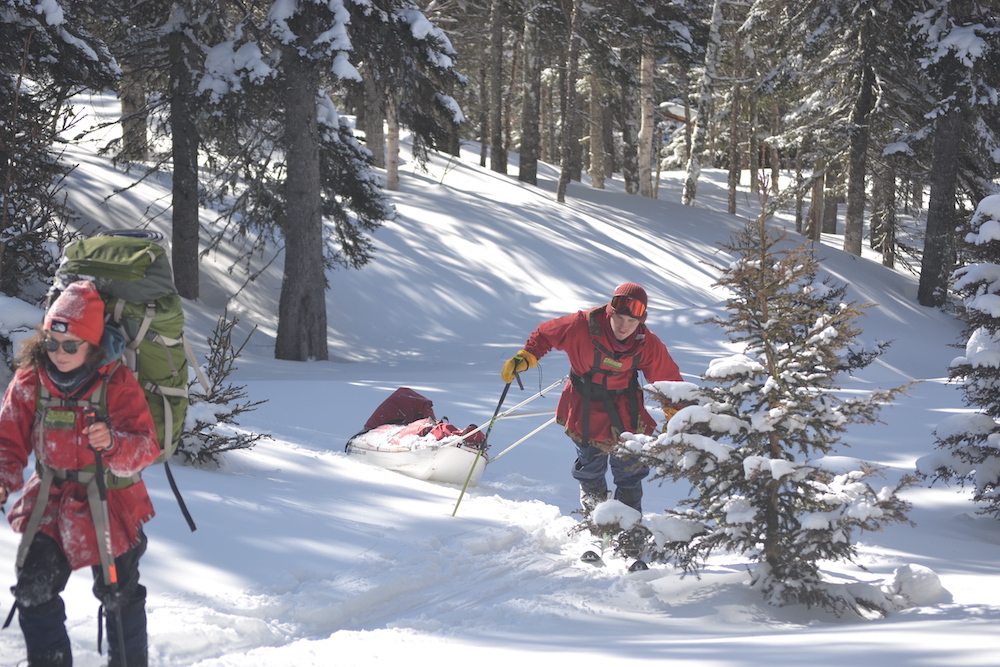 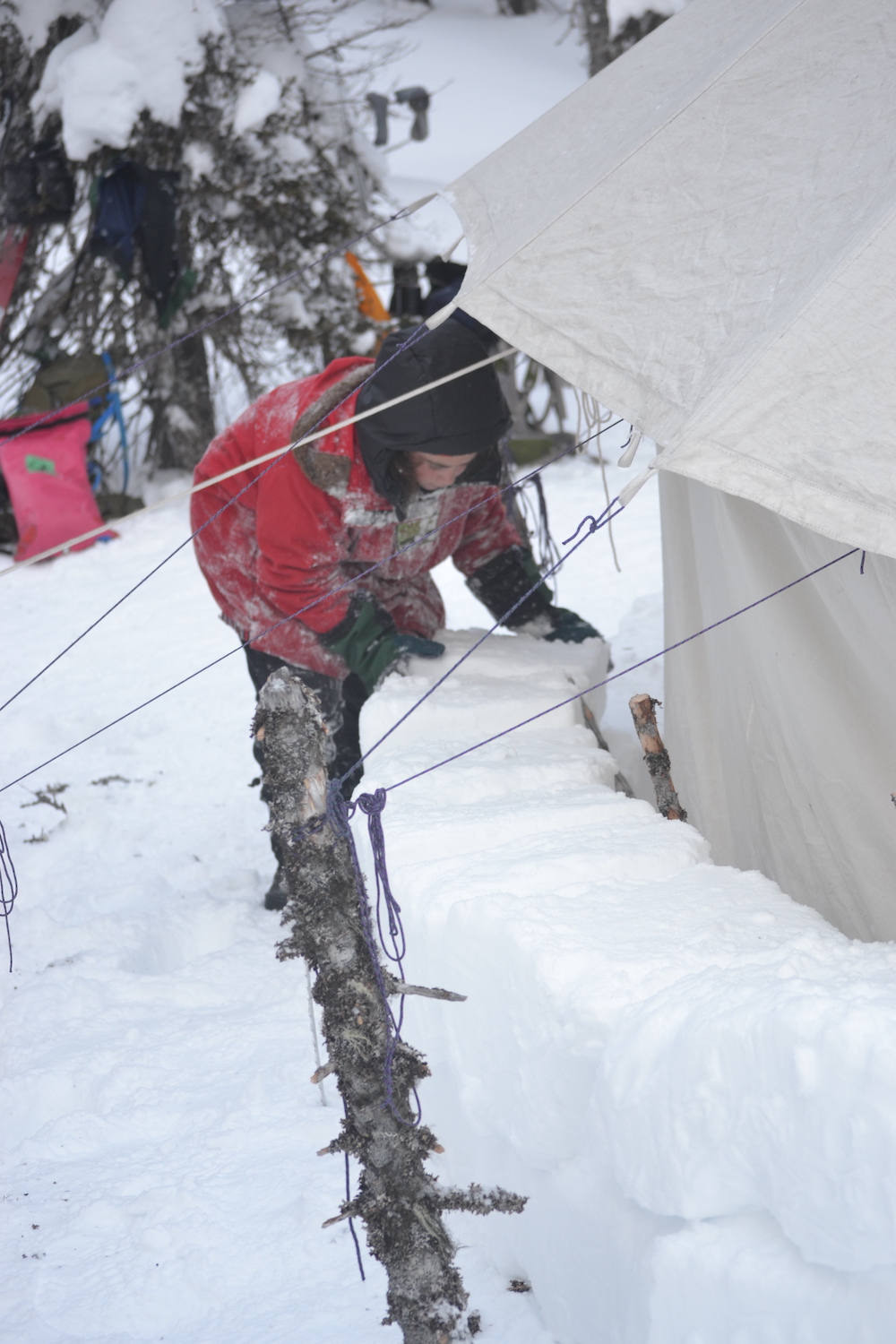 Another morning of waking up, hanging sleeping bags, doing chores, eating seven grain, and doing journal reviews. I always love it when we read Ministry for the Future. Today we learned about the post war financial order from 1944 and the proposal of the International Clearing Union, about the World Bank and the “structural adjustment programs.” Misha told us briefly about Mikhail Gorbachev and this missed chance for a denuclearized world. We created Book of Wisdom pages for all of our Big Jobs and ate delicious soup for lunch (with broccoli!). When people had finished their pages we transitioned outside to start constructing a snow cave. 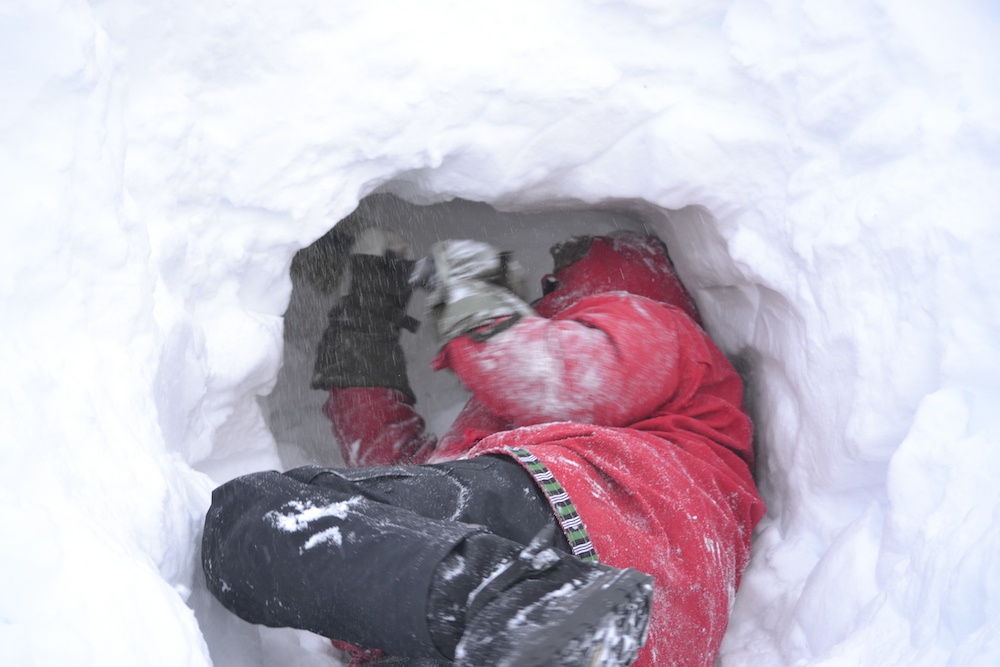 Snow is like an easel, six strings, a needle
Many different things to bring to people
Maybe you can board, or ski, if you’re able
Snow is not a chore but more, much more
Looking out the window, I open up the door
Then all I see is white, it falls onto my floor
Even when the chilly wind chills me to the core
I know, I always know, that snow is so much more
The wind is feeling thin, a shovel and a grin
I see a large snowbank that I’d like to be within
I dig and I dig, now the snowbank is no more
Here it is, a shelter with a bookshelf and a foyer 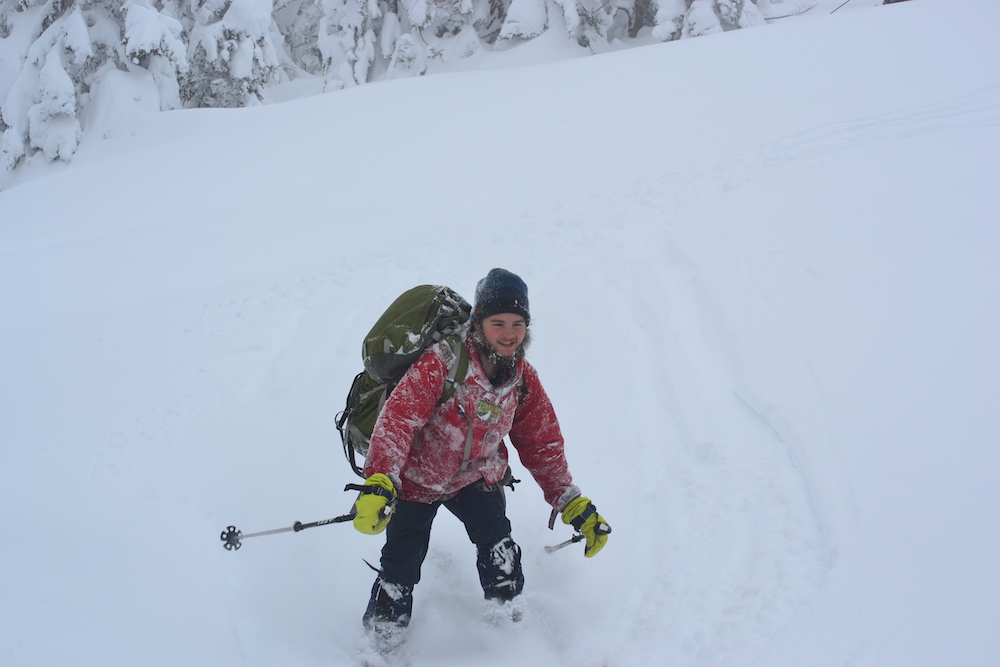 Alex does it with a smile! 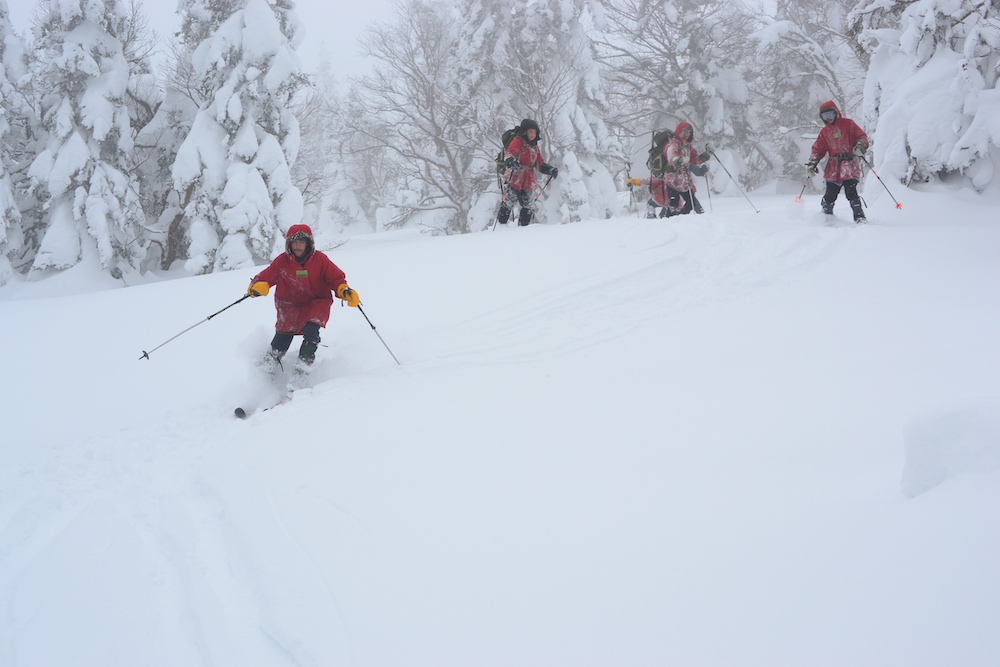 Today I think honestly may have been the best day of my life. No joke, no exaggeration. We went up Mont Blanc again, this time as a group, and we took a different route. We ended up traveling along the ridge and past where we went up last time during our navigation exercise. 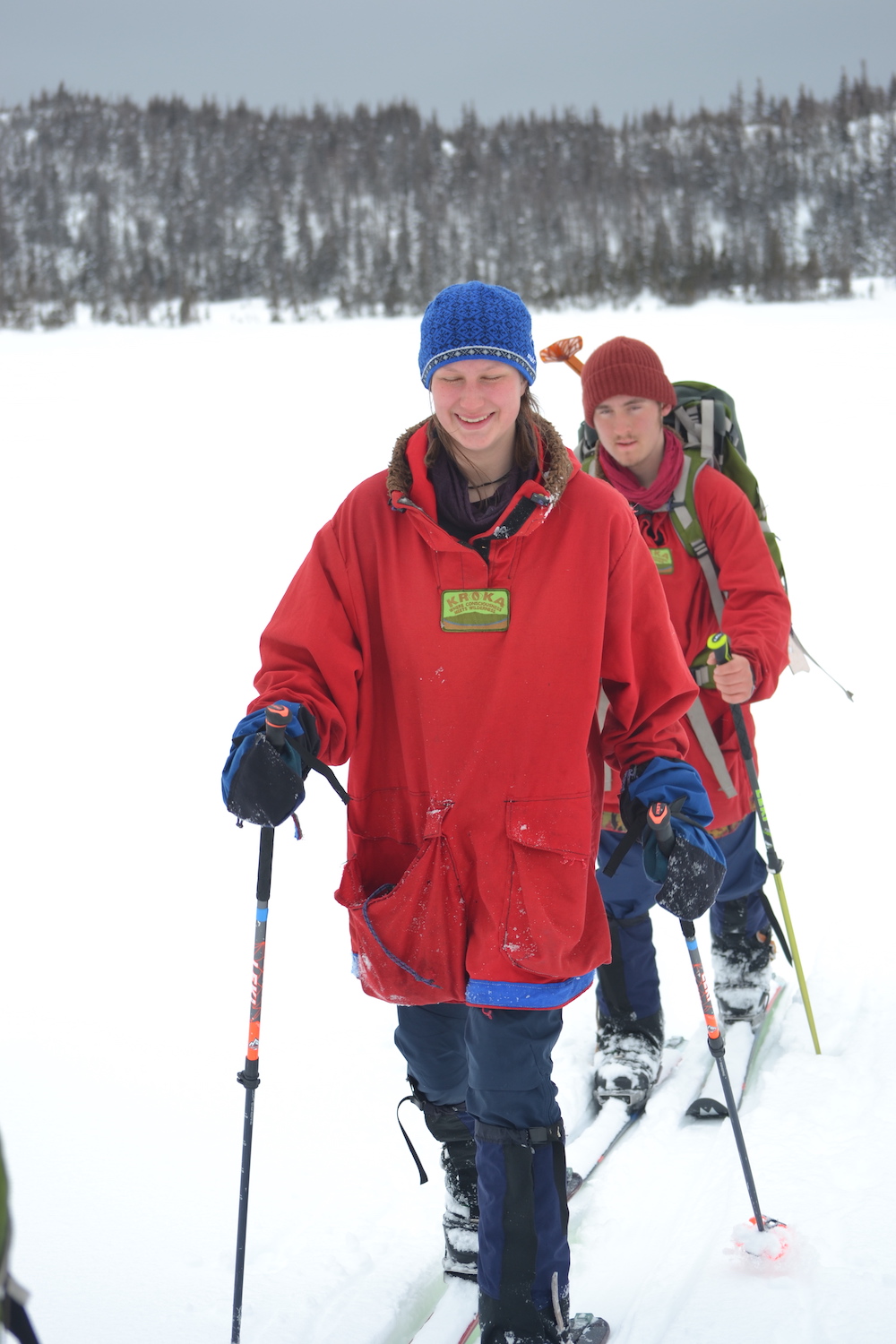 This was even better than last time. This time it was clear, so we could see the whole range of the snow capped Chic Choc Mountains. You could see the smaller ones with less snow, and then on the other side you could see the St. Lawrence and across to the north where we will be headed to shortly. 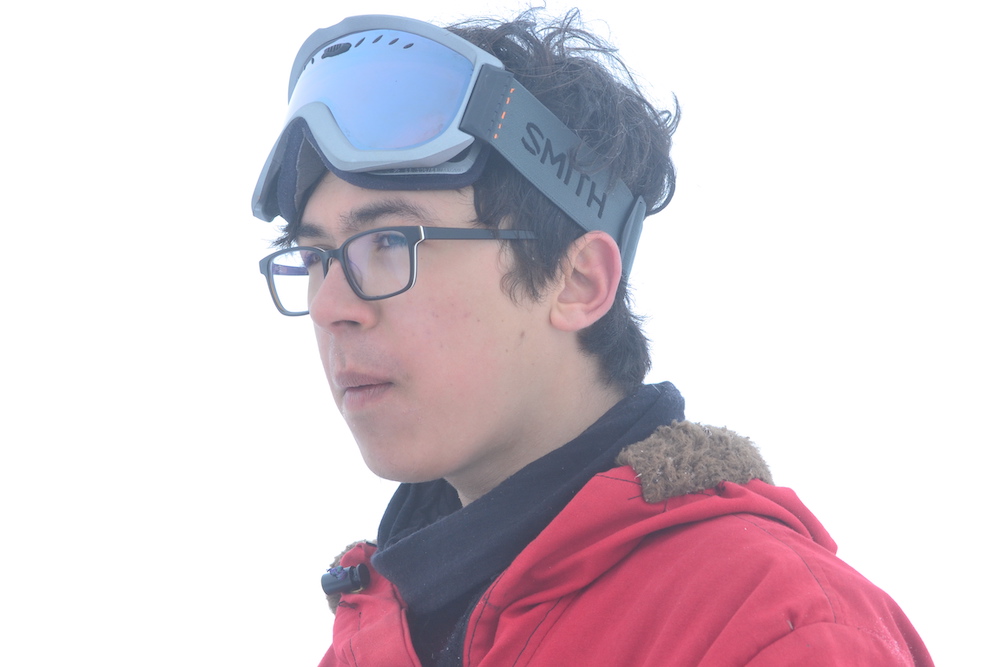 Lucas getting ready for epic descent

The views, the trees, the snow, everything was so unbelievably, insanely gorgeous. Absolutely stunning. We saw two people at the top which was wild! Then….we got to go down! We went down, down, down, into the drainage and up and down the side of it, letting our momentum carry us up the sides. After we all met up at the bottom, a few of us decide to go back up again with Nick. We used the risers on our skis and put them on touring mode which made it easier to go up. Before getting a little used to it, it felt very weird. I wiped out multiple times and carefully ran into a tree once. It was great, and I had such a blast.

I feel so fortunate to have been able to experience today and see what I saw. This, I thought multiple times throughout the day, this is living. This is life and this is why I’m here. To see and experience the world in every way possible. 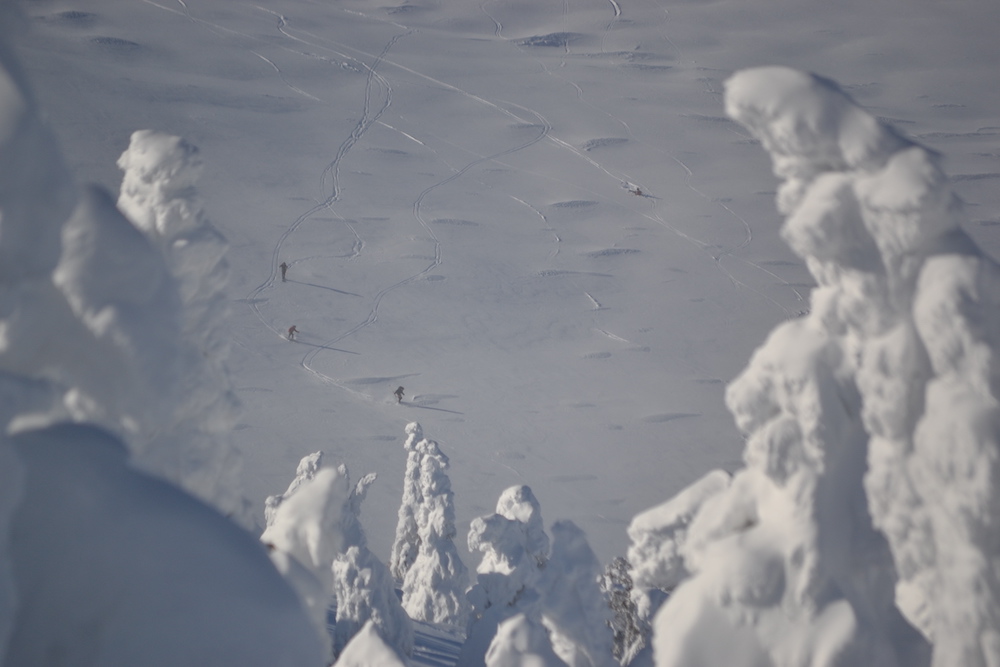 At 4:15AM on the final day of our Gaspé Expedition we were awakened by a crack and a crash to find that the weight of falling snow had torn our fly and snapped our tent pole. We left our sleeping bags and quickly shoveled the snow away and replaced the broken pole. At 4:45, Misha and Nick said goodbye and told us to follow their tracks and meet them at the van by noon at the very latest. It was our group solo day. 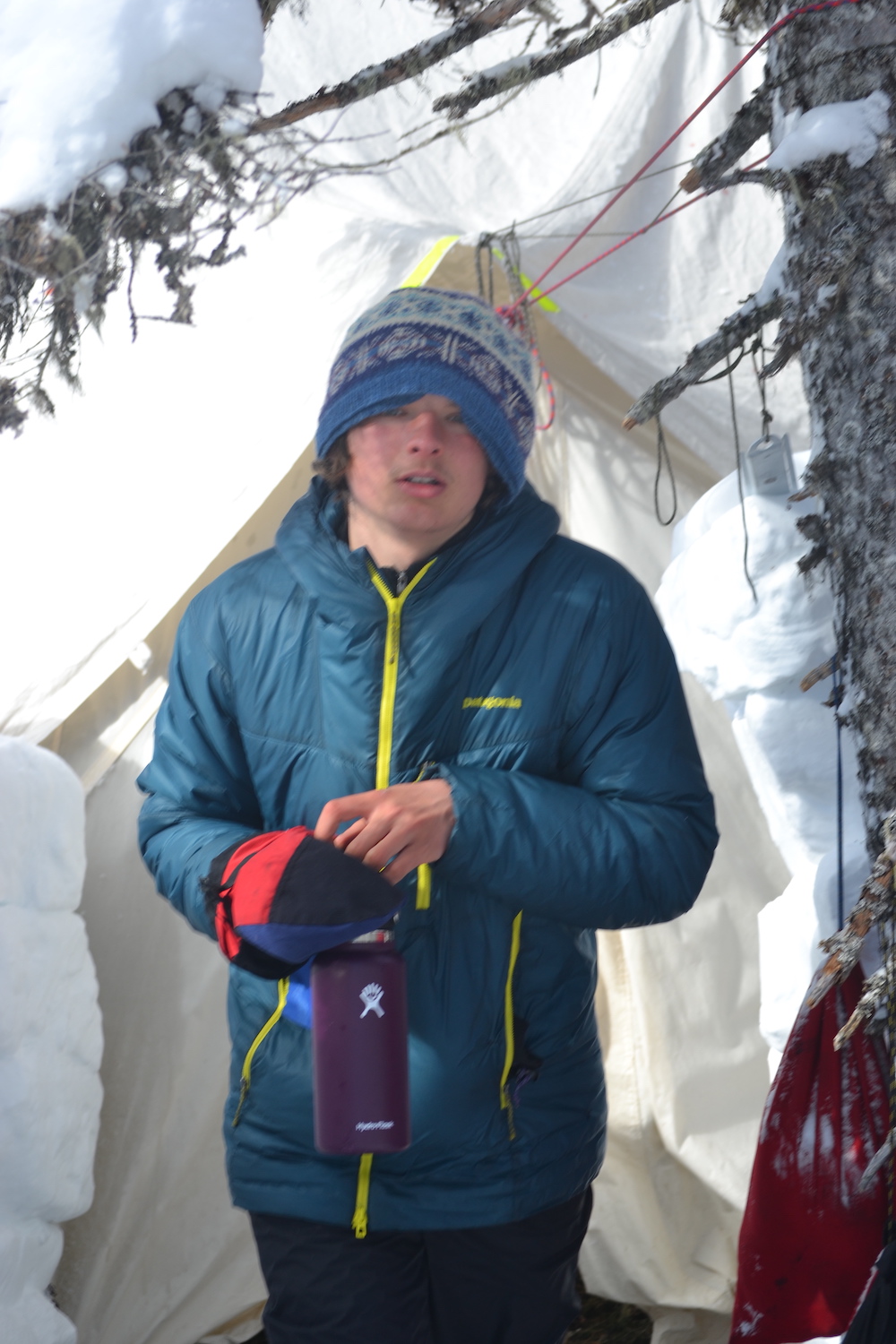 Shortly thereafter, we were skiing through the snowstorm. Almost immediately Fern almost fell through the deep snow into a stream buried beneath us, which gave us pause and caused us to travel more carefully over the flowage. 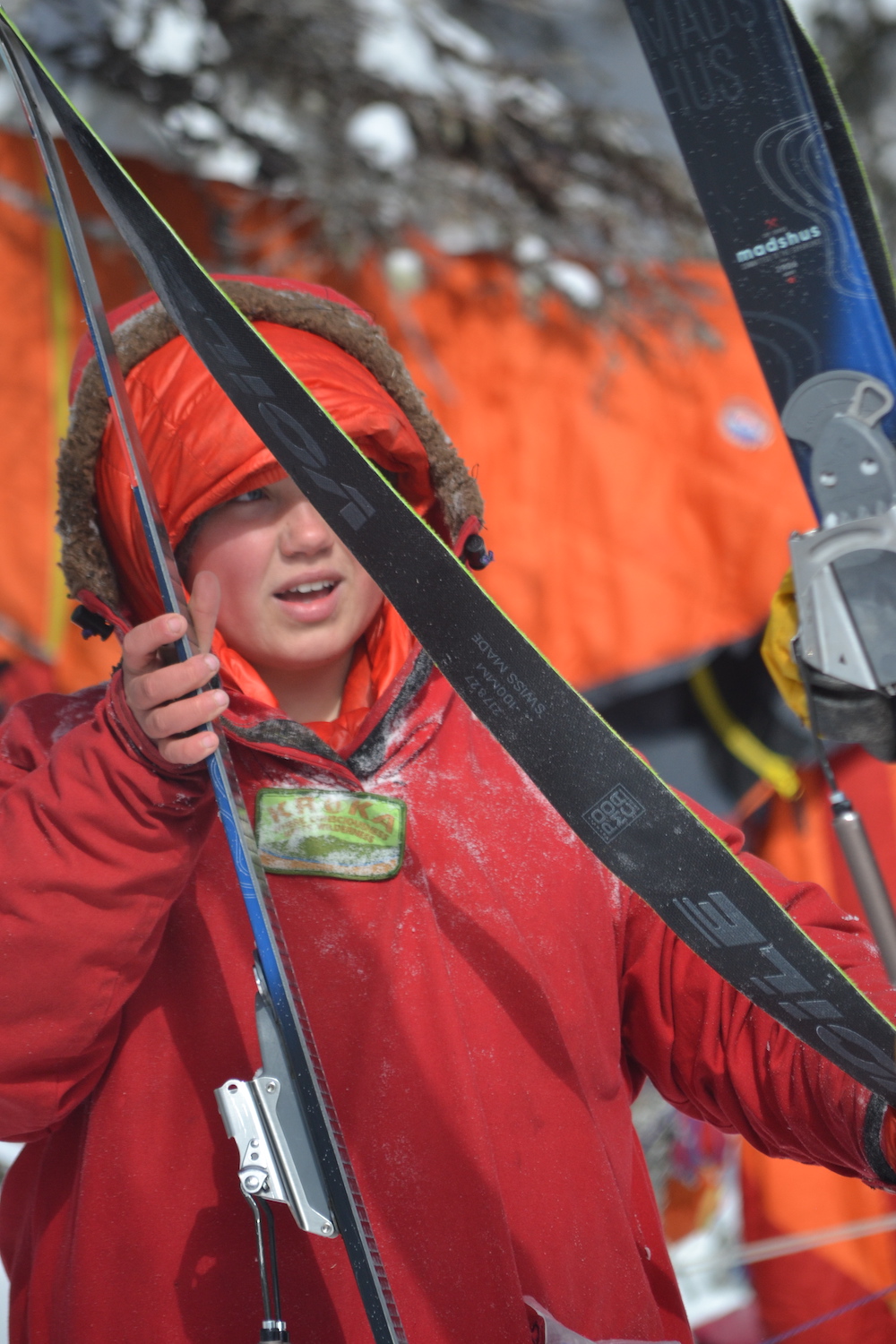 A little while later we reached an open windswept place where the tracks we were following had completely disappeared. We never found the tracks again, but instead continued south in the direction of our destination. As we moved forward, it became extremely physically taxing to break trail and so we began to take turns. Thankfully the wind was at our backs, but it was strong enough to sting our faces and ears and create a total whiteout. Pushing forward, we started to realize that there was no way we would arrive on time. 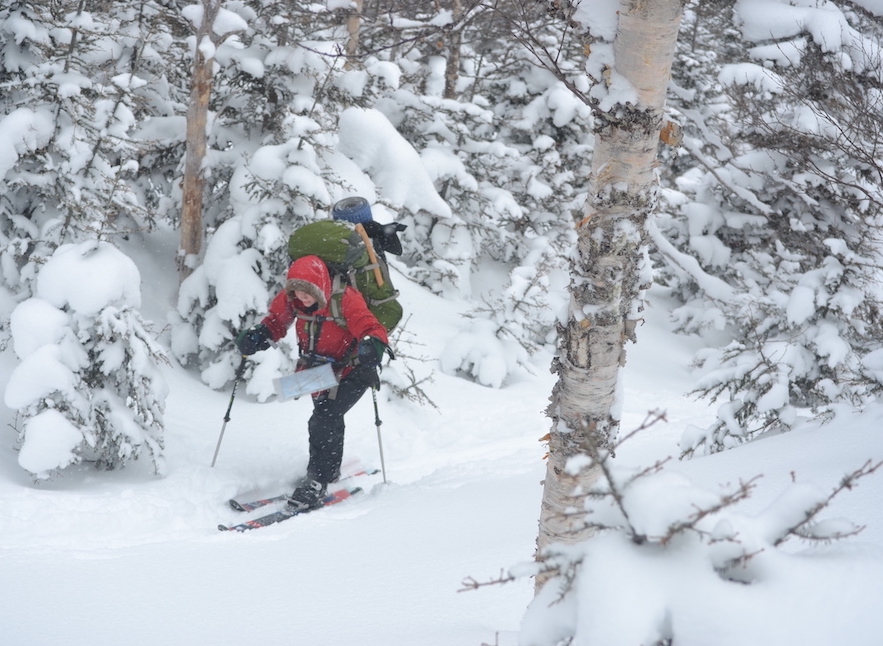 Eventually, we had to make a steep descent to a stream below us, bushwhacking through close fir and spruce trees. Moving in our large group with a sled was very slow going, but once we reached the bottom we were grateful to be out of the wind and closer to the van. 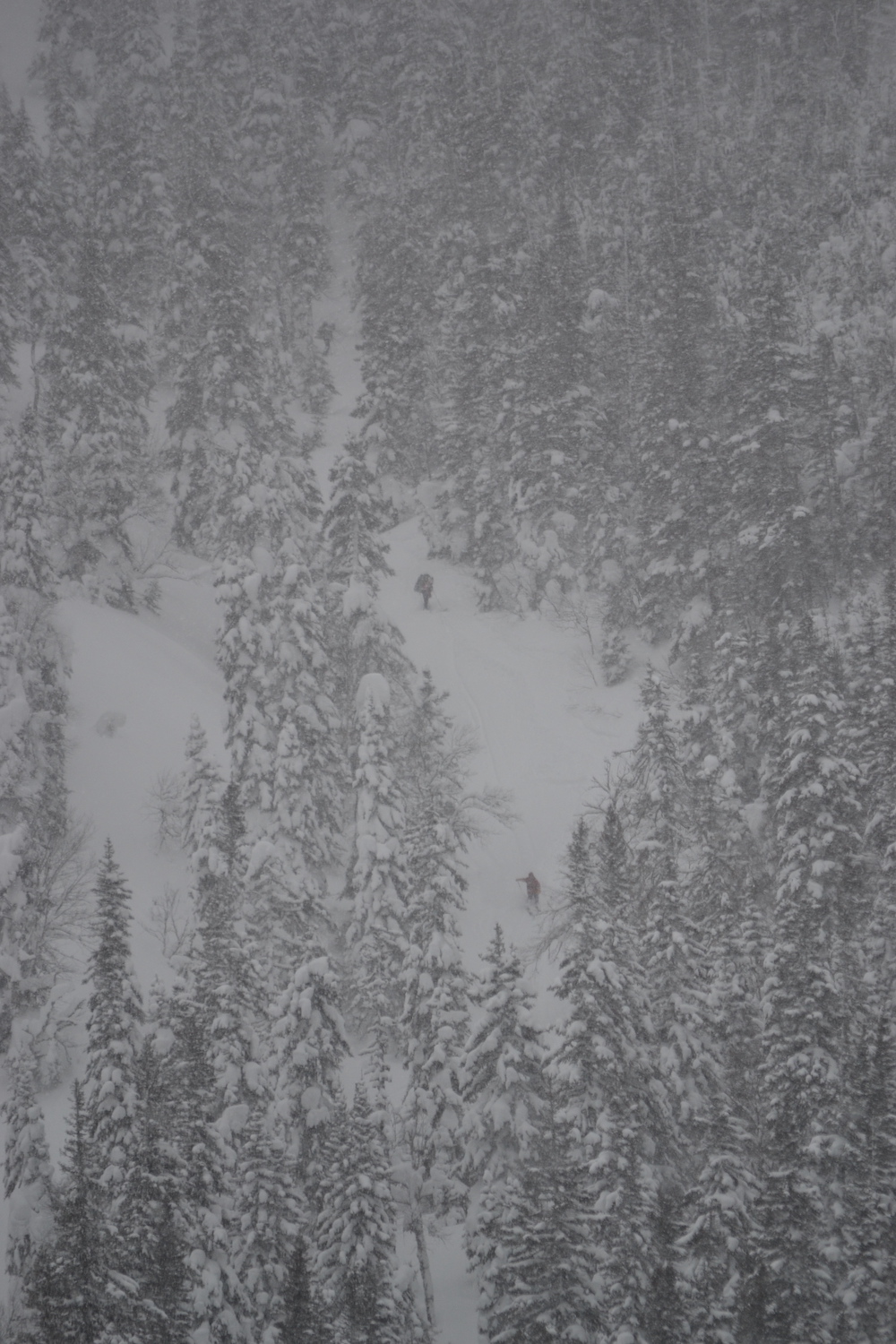 At 3:30 we reached the van, relieved and exhausted. Nick and Misha had left their backpacks but were not there, and so we surmised they had gone to look for us. As we sat in the van and worked on our essays we imagined them up in the storm looking for us. At 5:30 they returned. After they confirmed that everyone was alive, we tried to leave but found the road was impassable when we got stuck in the deep snow. We spent a night at a nearby logging camp and slept with heat and bunks. At 3AM the plow came for us and pulled the van and trailer onto the cleared road. After a few hours of cleaning and packing we were gone, leaving a thank you note behind for our unknowing hosts. 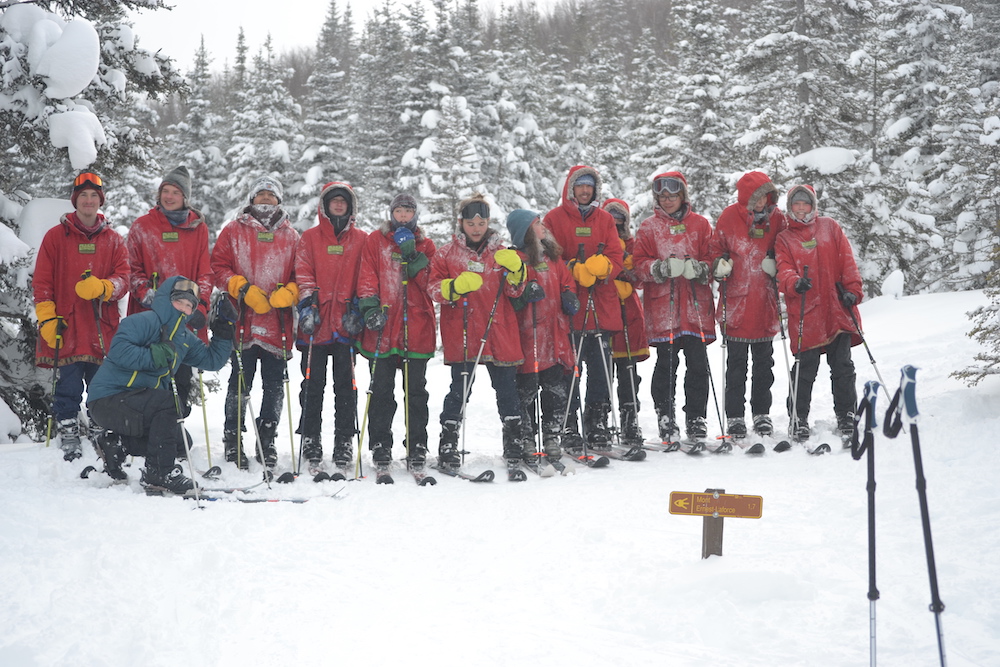 Now we’re off to Uapishka with Tom and Nick! Having arrived a day late back at Manoir de Sapins we’re rushing to clean and organize our gear in half the time we expected. Tomorrow, at 8AM, we’ll be on a ferry across the frozen St. Lawrence for over a month of expedition without resupplies. We are ready. In the Green Mountains we learned how to travel and set up camp in winter, and in the Mont Chic Chocs we learned how to live in deep snow, how to navigate without trails and how to skin up mountains and telemark down. In Uapishka we will put everything we’ve learned together and our group will share unforgettable experiences which will strengthen us and teach us in invaluable ways. Until the Spring! 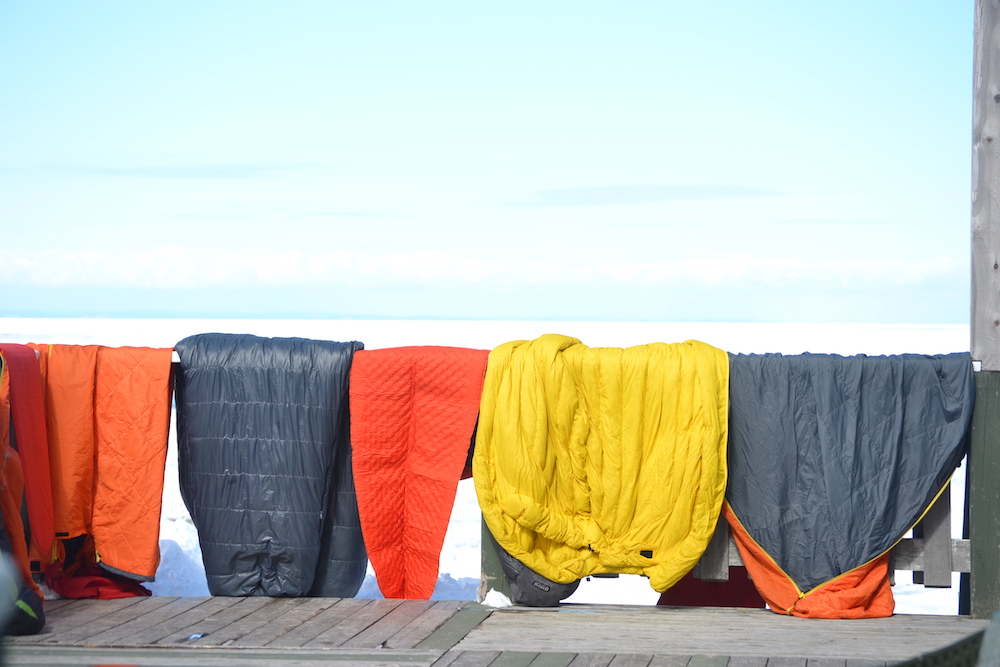 Sleeping bags drying with the frozen St. Lawrence in the background