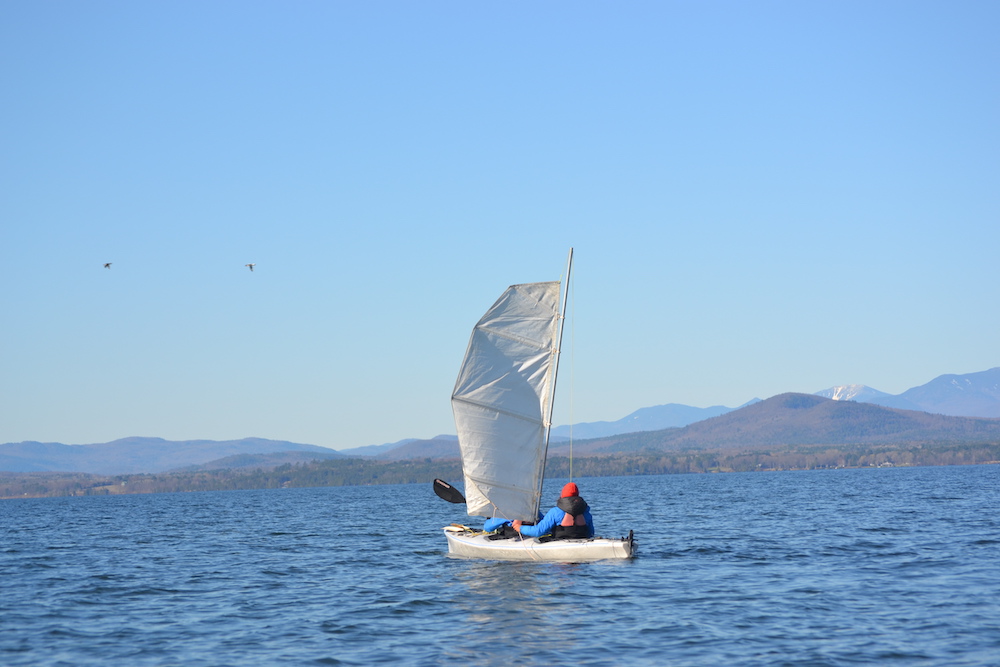 Heading Due South: Au Revoir to Skis and Bonjour to Boats!

By Semester BlogApril 29, 2022No Comments

My life now smells like dripping moss and cedar,
Sounds like waves lapping against a rocky shore and the evening song of peepers,
Looks like a squealing chipmunk, blue mountains, and young nettles,
And feels like the wind and sun and a poplar paddle. 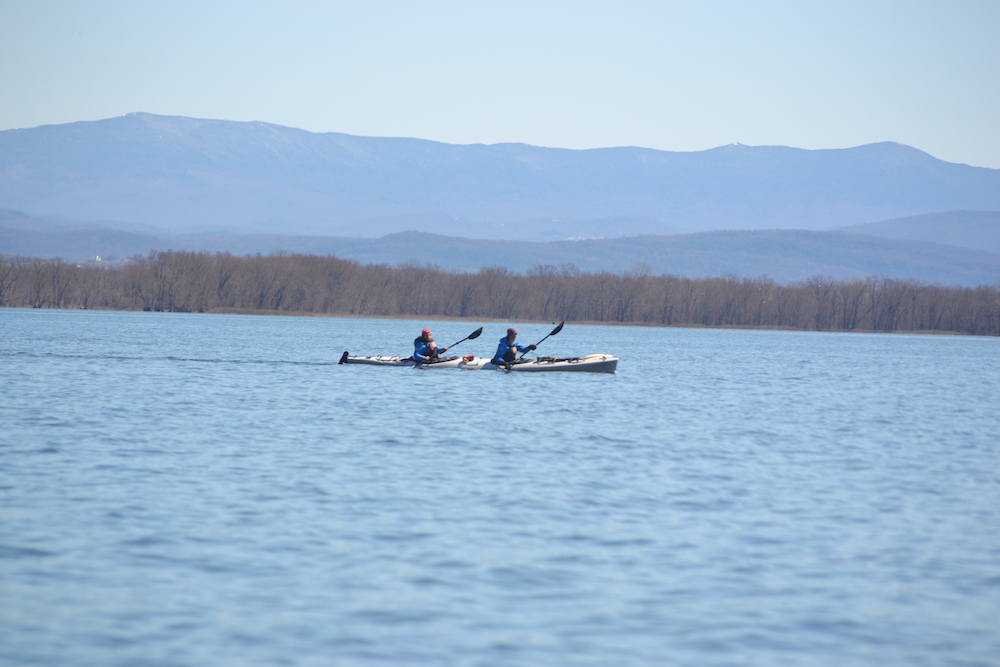 Sea kayaking with the Monroe skyline in the background

We’re in Whitehall, New York, and it feels like spring (although we’re supposed to get snow again tomorrow)! As our semester goes on, time moves faster, and the past couple of weeks have felt like no time at all. At the same time, they have brought immense change to our lives. 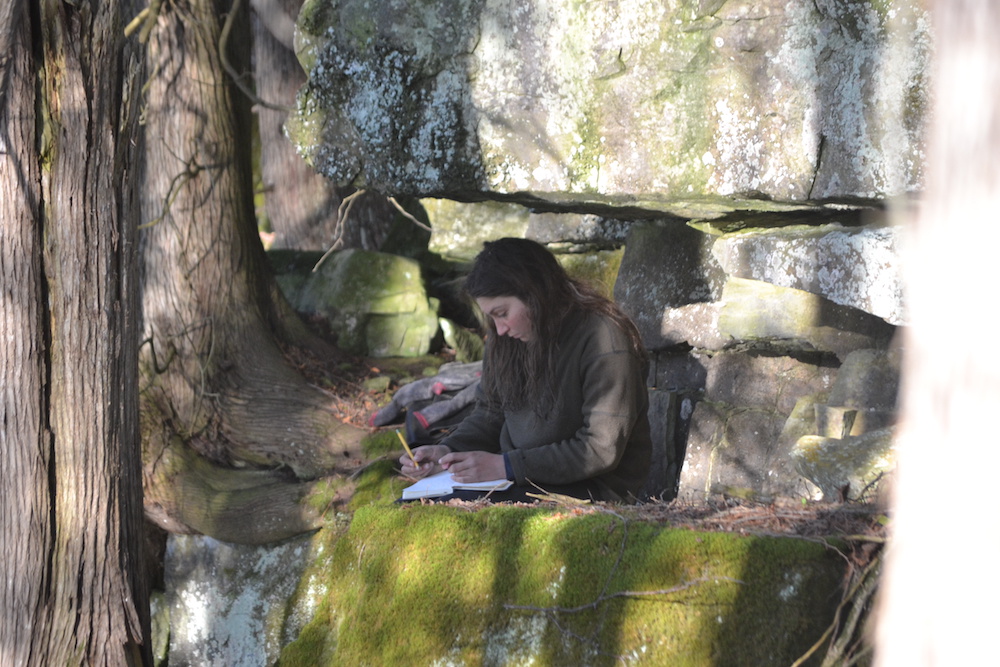 Phoebe journaling on a warm spring day in a limestone cave

Our layover in Quebec City involved meeting with Eve who is a tour guide and had an incredible stories and history about Quebec. People living in Quebec are French-speaking North Americans and are a very proud people. We did lots of walking and climbed lots of hills in the Old Town, whose western end is surrounded by a beautiful fortified stone wall that was built to defend against British attack  between the 1608 and 1871. It is a UNESCO World Heritage Site. 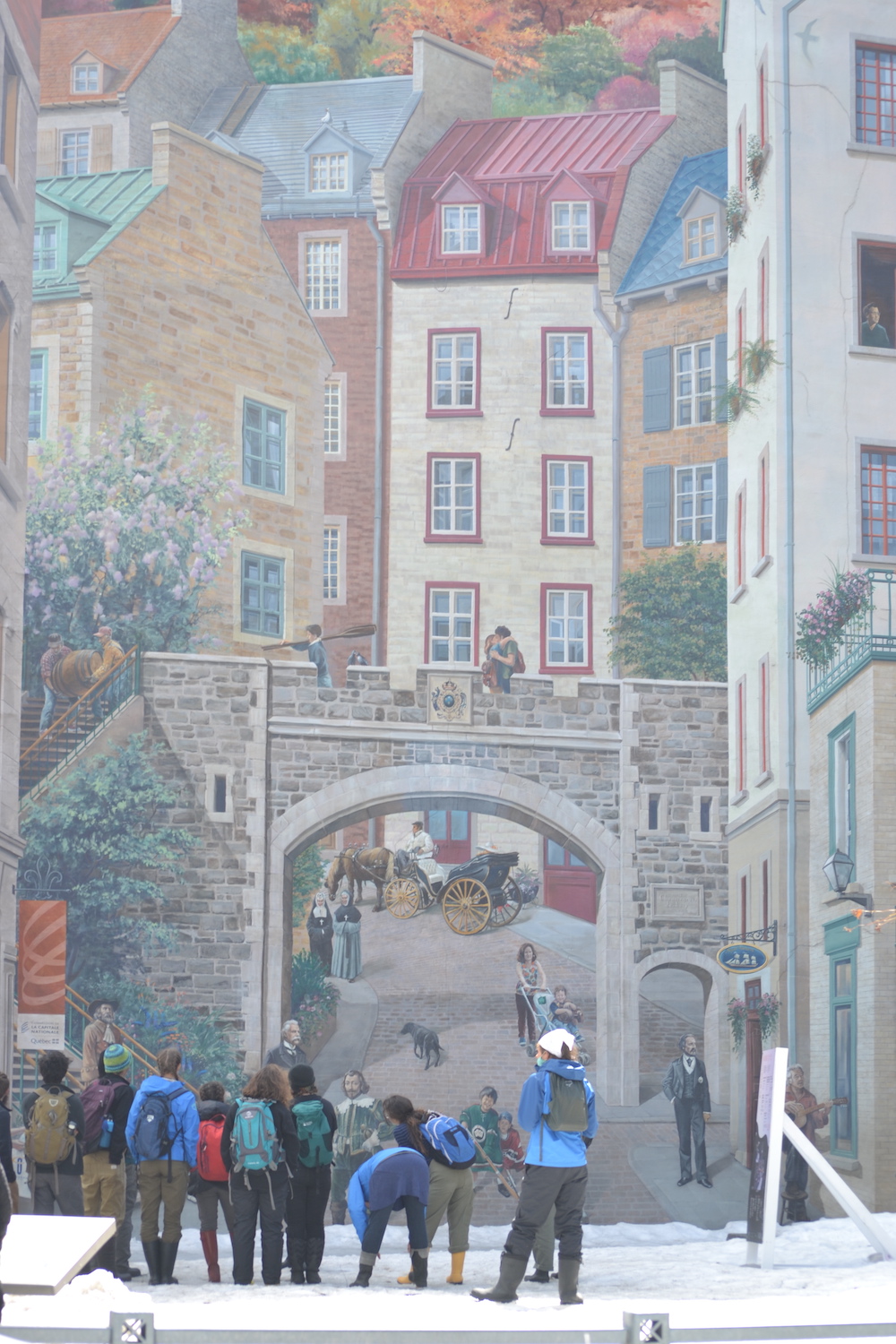 In front of a mural in Old Quebec

We went to the Museum of Civilization with exhibits on Pompeii, the Native people of Canada, Generosity and Poop!, and then headed out in pairs with some money to buy treats for ourselves as well as one treat to share with the group. Eve also came to our Airbnb and shared about some of the cultural differences between Quebec and the United States. We had an amazing visit to the Nordic Spa moving between sauna/steam room and hot pools and freezing cold pools. It was luxurious!

We bade farewell to Tom and Nick Paul at the conclusion of the Uapishka Expedition. Nick had been with us on all of our winter expeditions. We did not wish to go on without him, so we created “Nick on a Stick” out of one of his thick sleeping socks tied to a beech branch. At the bow of the Rusalka, Nick on a Stick stands proudly, leaning over the water as our figurehead. 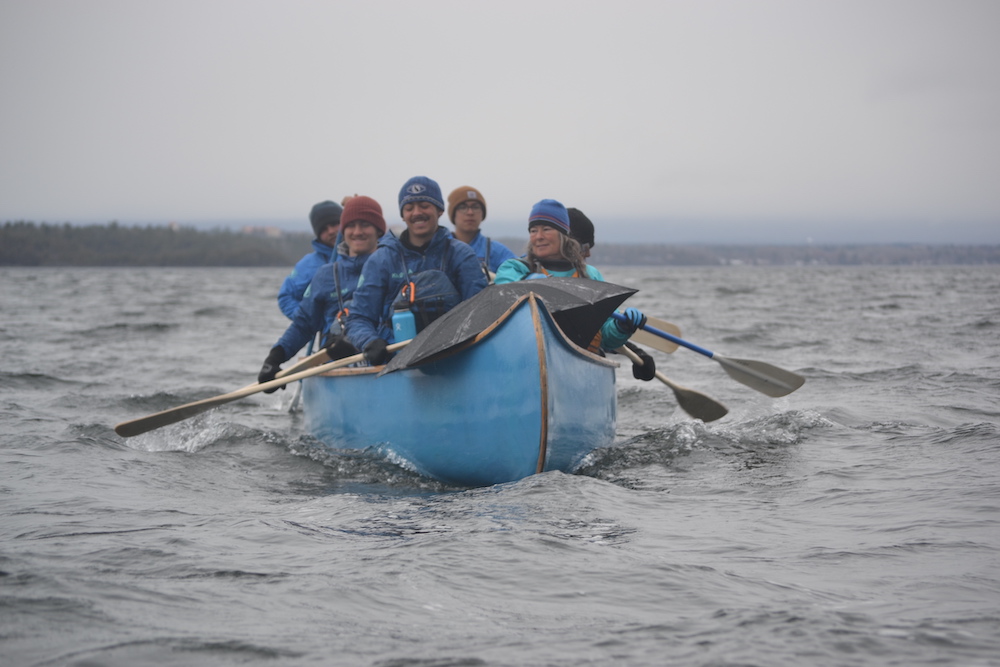 Stormy day crossing to Burlington with Violet huddled under the umbrella

Having left Uapishka and the northern winter landscape, we are no longer in the wilderness: as we paddle, we pass homes, bridges, and cities, and even made a trip to downtown Burlington to buy food. The land is no longer snow covered and the soil is unfrozen; we sleep in four-person nylon tents and eat our meals outside. 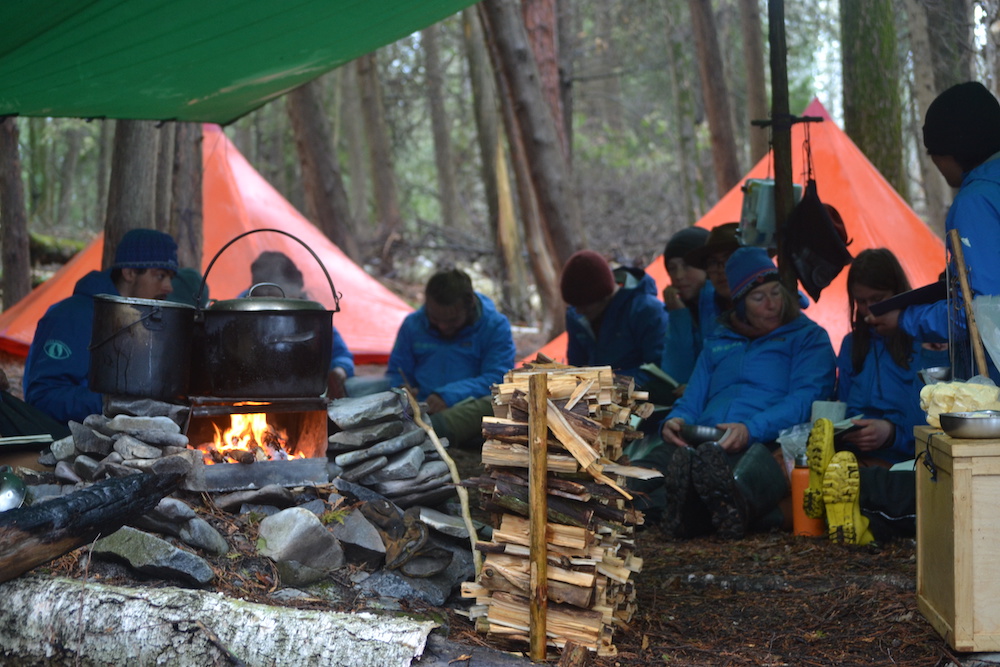 Camp in the cold rain on Valcor Island

We power our travel with our arms and the sail. After emerging from the deep winter, the combination of advancing spring and our southern travel makes each passing day feel warmer and more bursting with life (even though the spring is slow in arriving and raw gray days on the water feel colder than in the depth of winter). 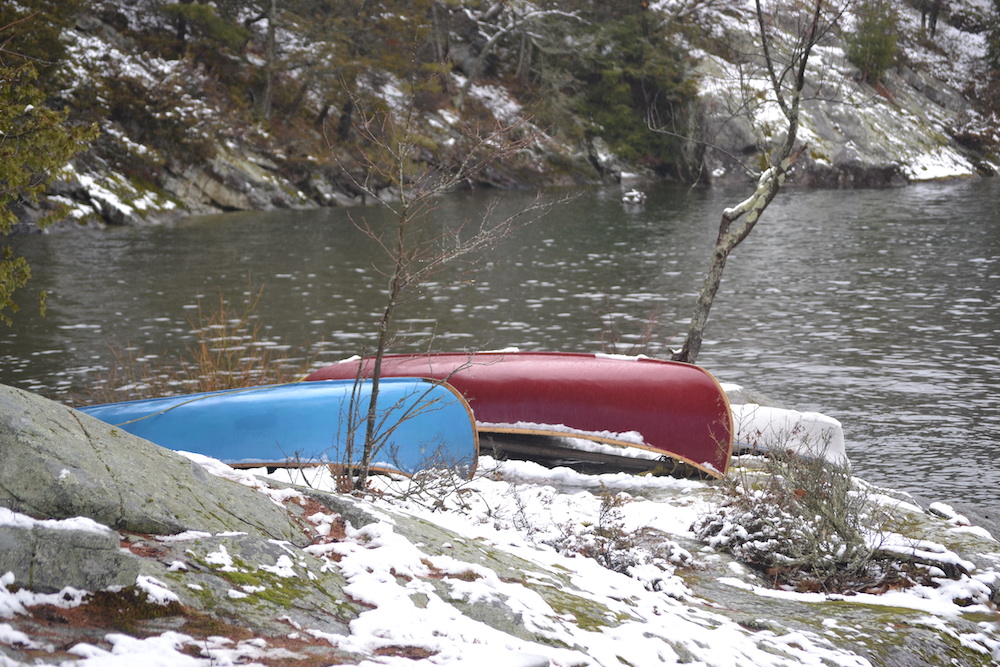 During the days, we travel in three boats: Rowdy Rusalka and Kasha, our seven-person voyageur canoes built by previous semester and summer programs, and a two-person sea kayak captained by Jenny, our kayak master.

Sailing past the snow-covered Adirondacks

Everyday a different person joins Jenny in the kayak and they weave in and around the voyageurs as we paddle south. When we have a north wind, we raise our sails, tying our masts to the sides of the canoes with four stays and holding our square sails open with ropes called sheets. 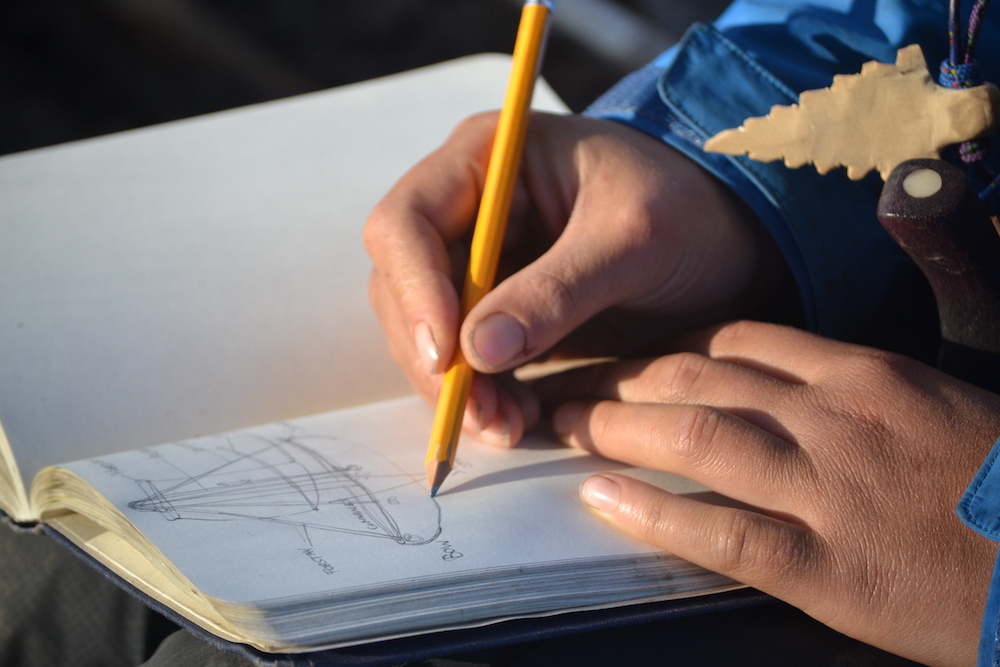 We laugh as we sail, thrilled by the ability to travel without paddling and by the tall waves which crash on our boats and rock us back and forth. 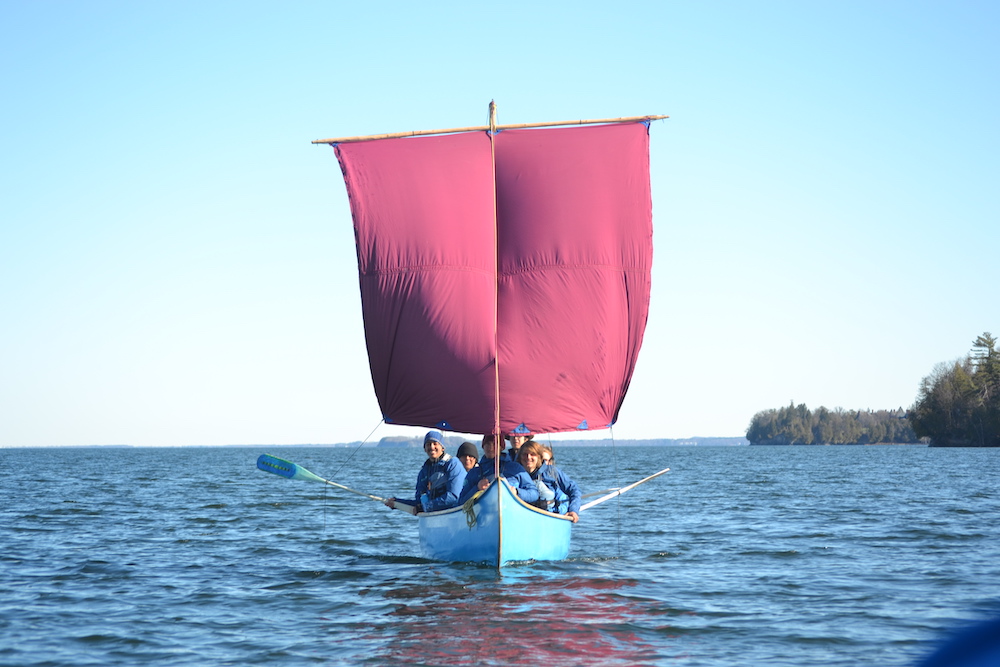 Our 28-mile day sailing from Barn Rock to East Creek

In the evenings, after making camp, we sit on our foam butt pads, listening to the weather forecast on a small handheld radio and share heart-to-heart conversations with Nick-on-a-Stick. When the air is warm enough, we swim, and when it isn’t, sometimes we swim anyway. 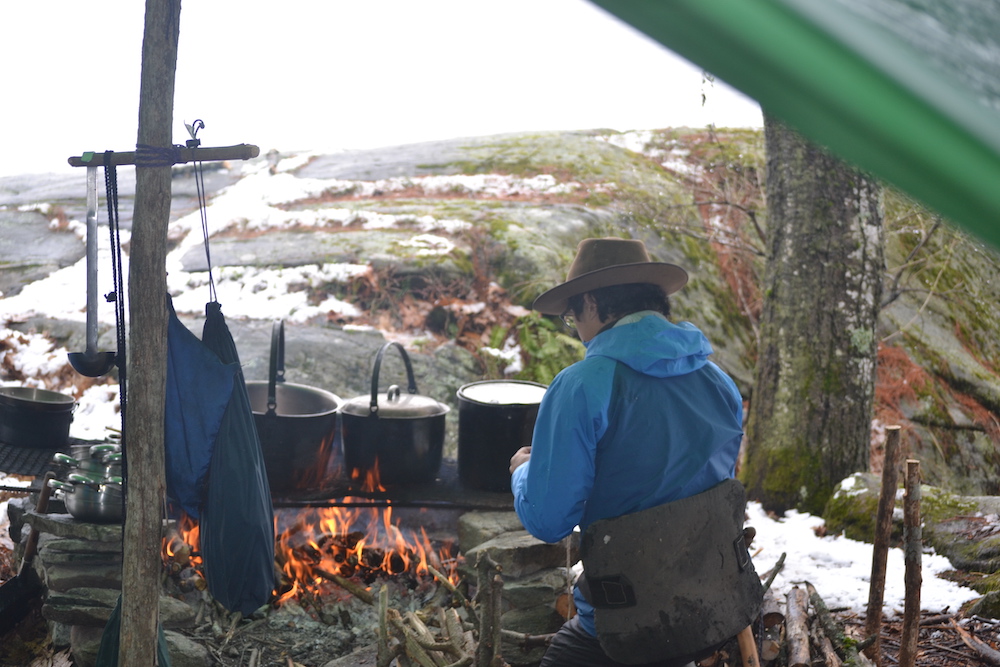 At Barn Rock we enjoyed a great cooking fire, skillfully built by Teresa and tended by Lucas, donning his foam butt pad.

Our Lake Champlain Leg began with blue skies and wind on the Richelieu River in Southern Quebec.  We were gifted with a few sailing days  and we took full advantage of our tailwind, once traveling almost thirty miles in a day! We finished our main text, Ministry for the Future, by Kim Stanley Robinson, and wrote our final essays along the way. 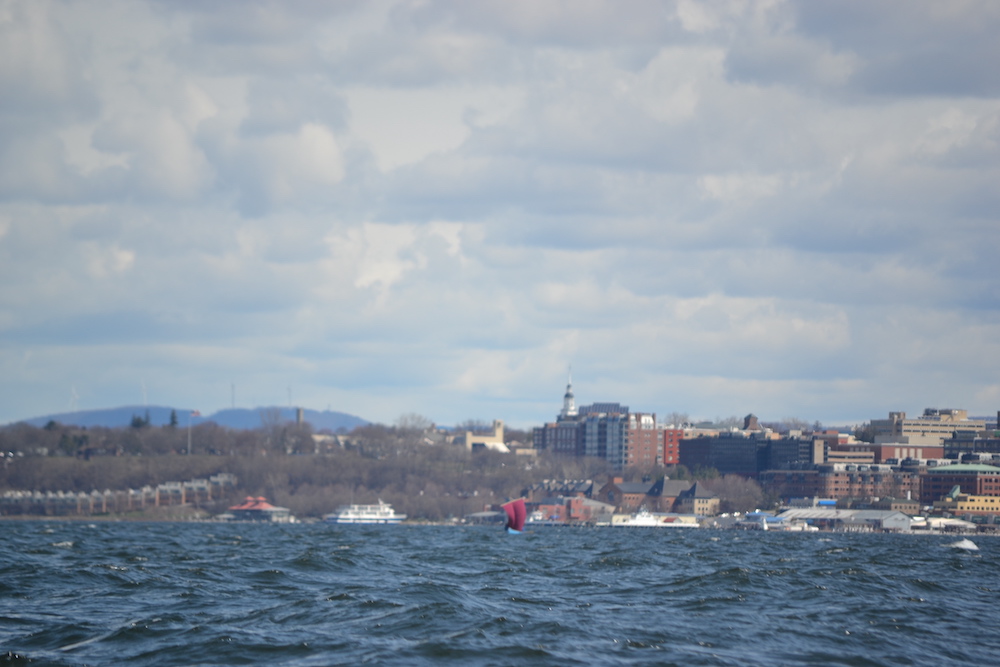 Sailing past Burlington on a fresh North-West wind

We gained a new instructor (Jackie) and a stowaway (Fern’s younger sister Miriam). Along the way, we were warmly hosted by Rock Point School in Burlington and Shelburne Farms in Shelburne, VT. 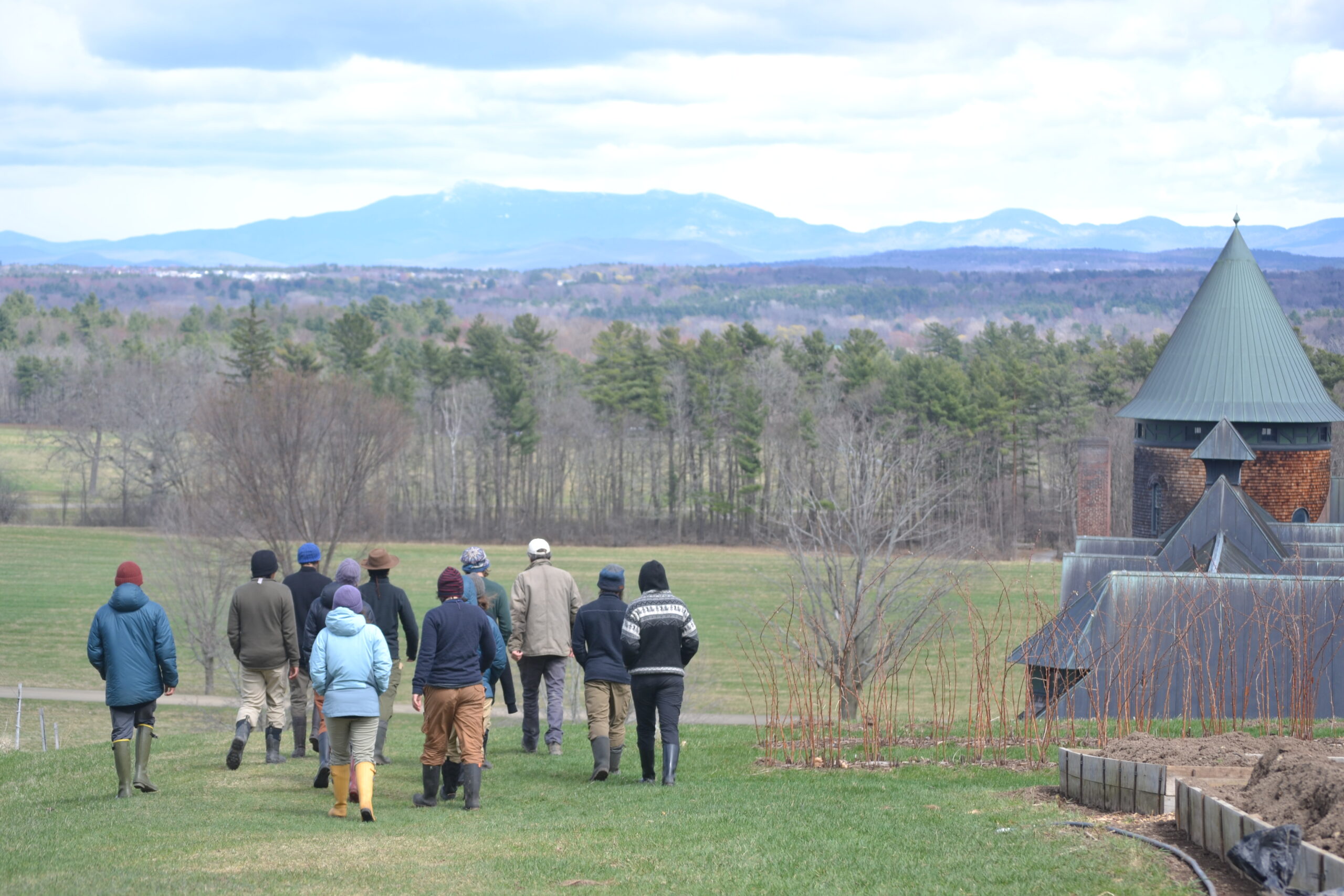 The Lake Champlain Maritime Museum in Vergennes, VT provided a base to host a heart-felt Parent Day. 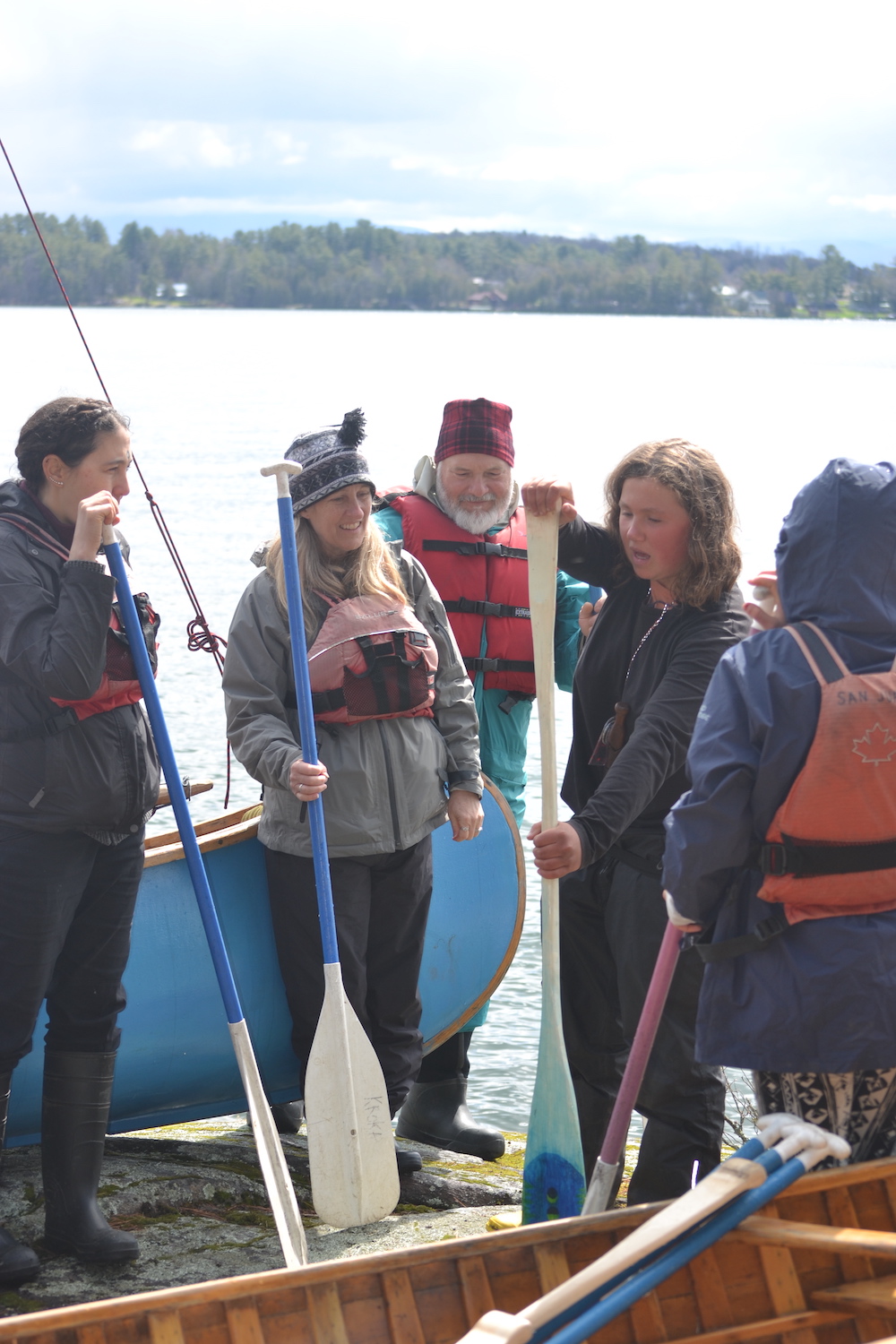 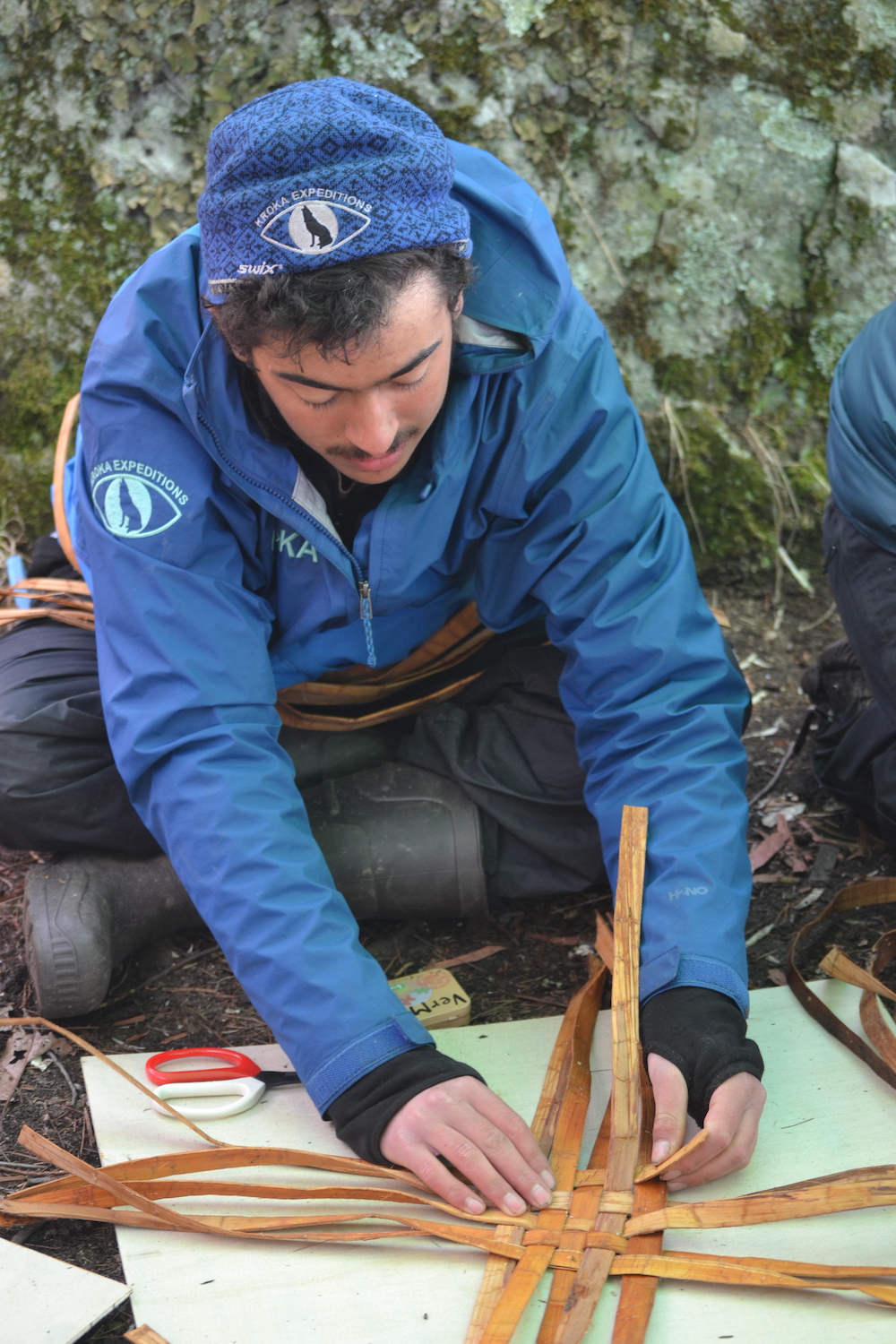 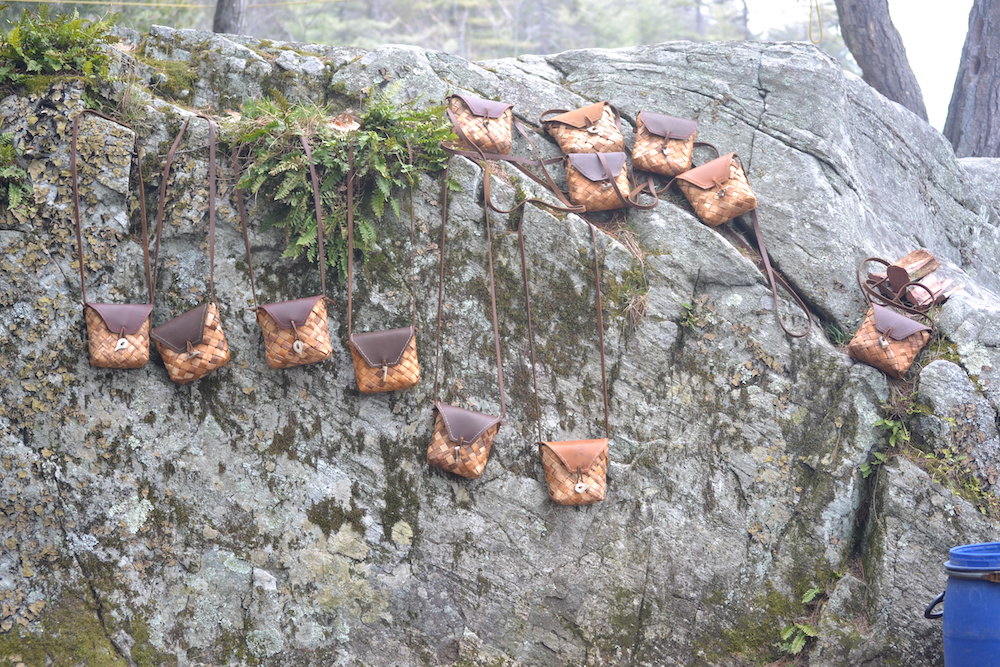 A family of finished baskets ready to be gifted to families

As our travels continued, the air stilled and warmed, we reached the southern lake, which was no wider than a large river. After passing through the Narrows of Dresden and arriving to a warm welcome in Whitehall, we met with Nathan, who replaced Misha in leading us as we paddle to New York City. 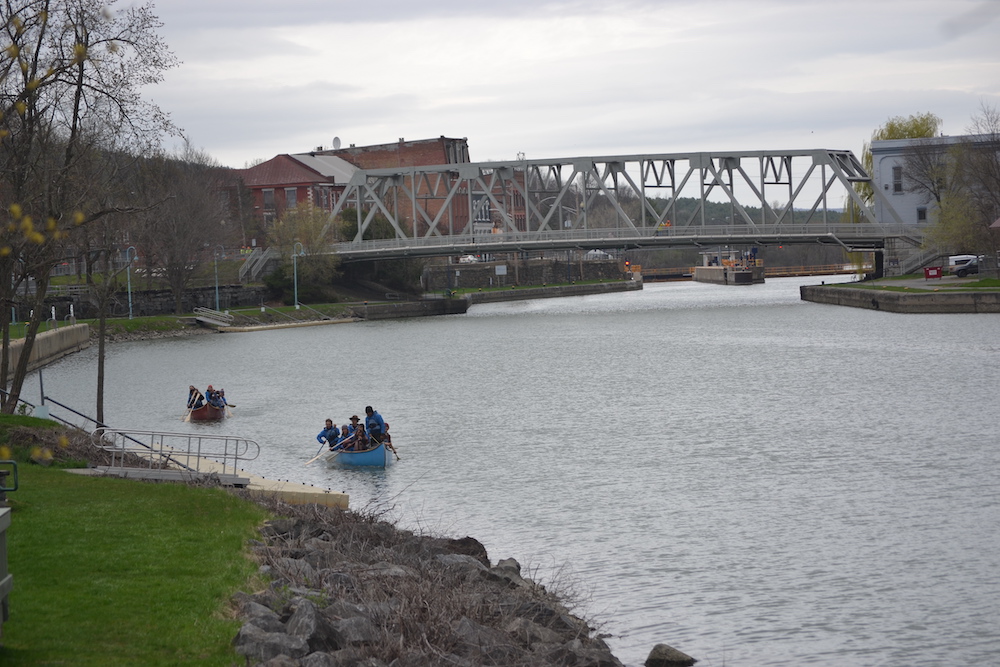 The group passed the lock at Whitehall, NY at 9AM on Tuesday, April 26, an hour ahead of schedule after paddling eight miles against the wind

One of the most memorable experiences of the leg was on Day one, when, after a four-mile wavey first paddle going against the current and a stiff headwind, we started searching for camp. This was difficult because the shore was walled with houses or flooded forests. Eventually, we pushed through the reeds to a small patch of pine trees on high ground. Midway through our first spring camp setup, a woman came over to us, questioning why we were on her property. We explained that we were a traveling semester program, but at first she didn’t believe us. When we told her we had skied for two months and were paddling to New York City, she laughed at the implausibility of our explanation. 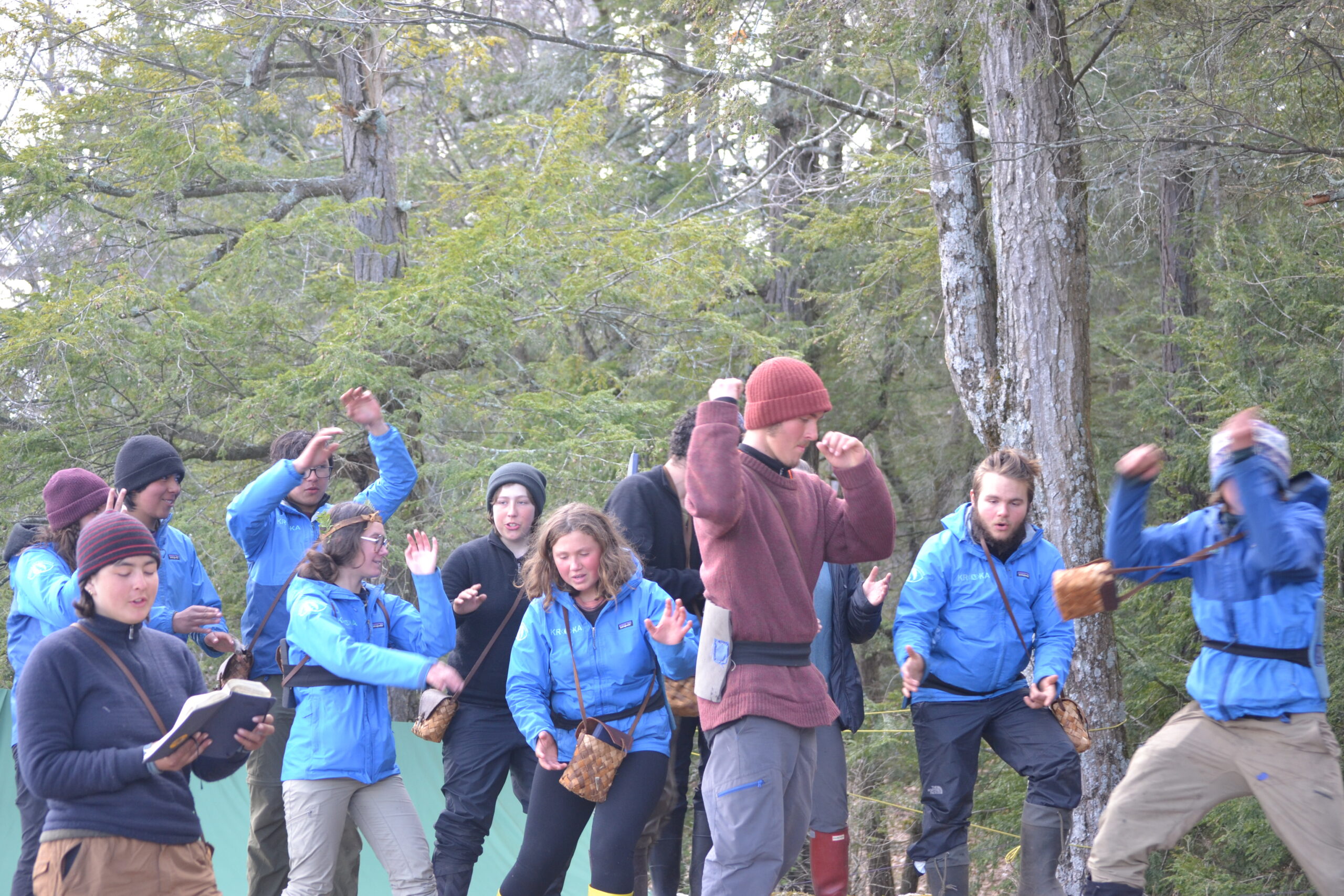 Then she took a good look at us, and it was amazing to watch her as her entire mindset shifted and she realized that we were honestly in need of a place to camp and would treat the land with respect. She welcomed us to stay, brought bread and chocolate and joined us for breakfast, making us feel at home. We were so grateful and we learned so much from this experience about moving past fear to find universal human friendship and generosity. 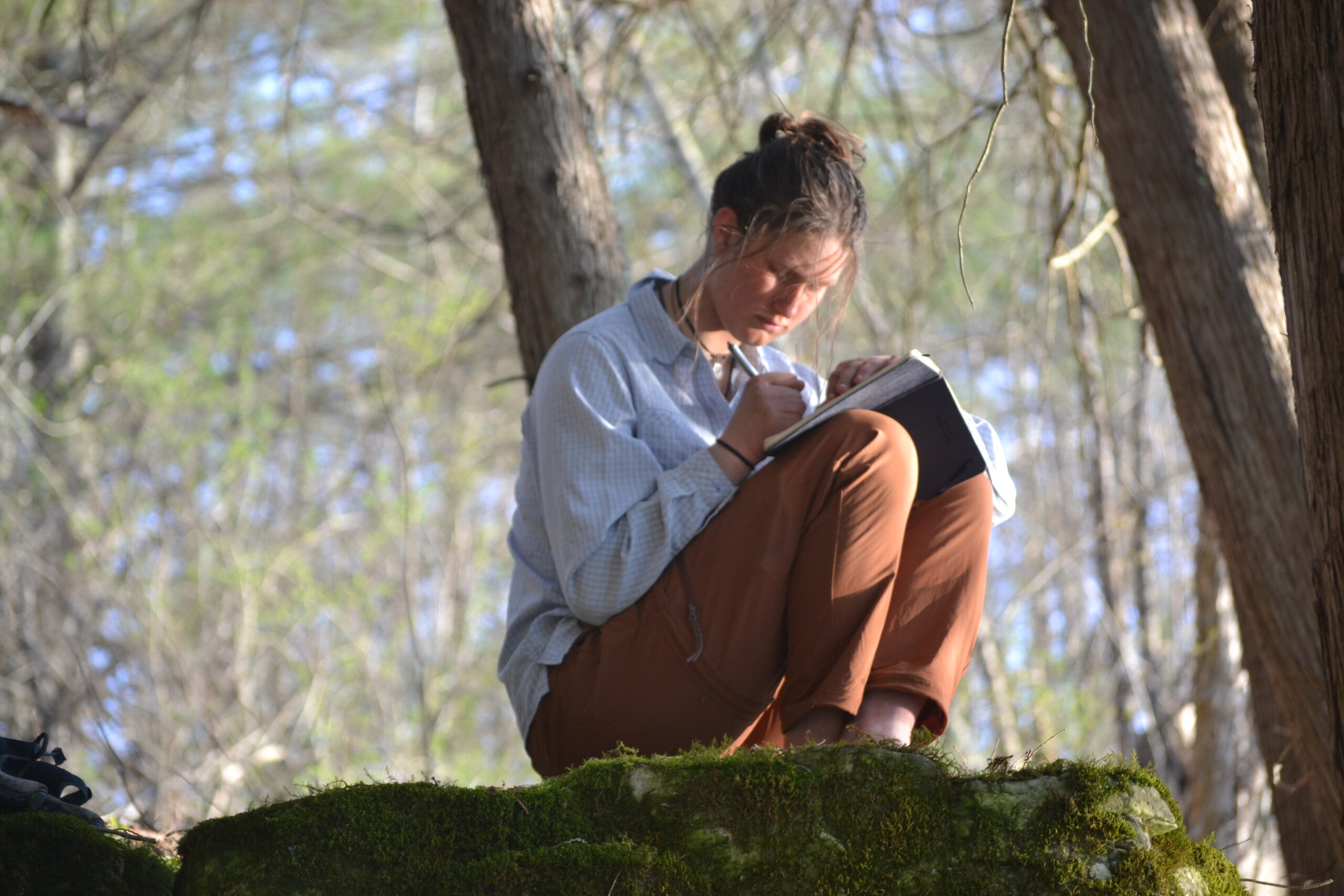 This is spring! This is the time when peepers make a blanket of sound behind soft guitar chords, splashes in the lake, and uncontrollable laughter; when trout lily, nettles, and dandelions add a fresh green color to our meals; when we begin to shed our thick clothes and feel the warm wind on our faces. 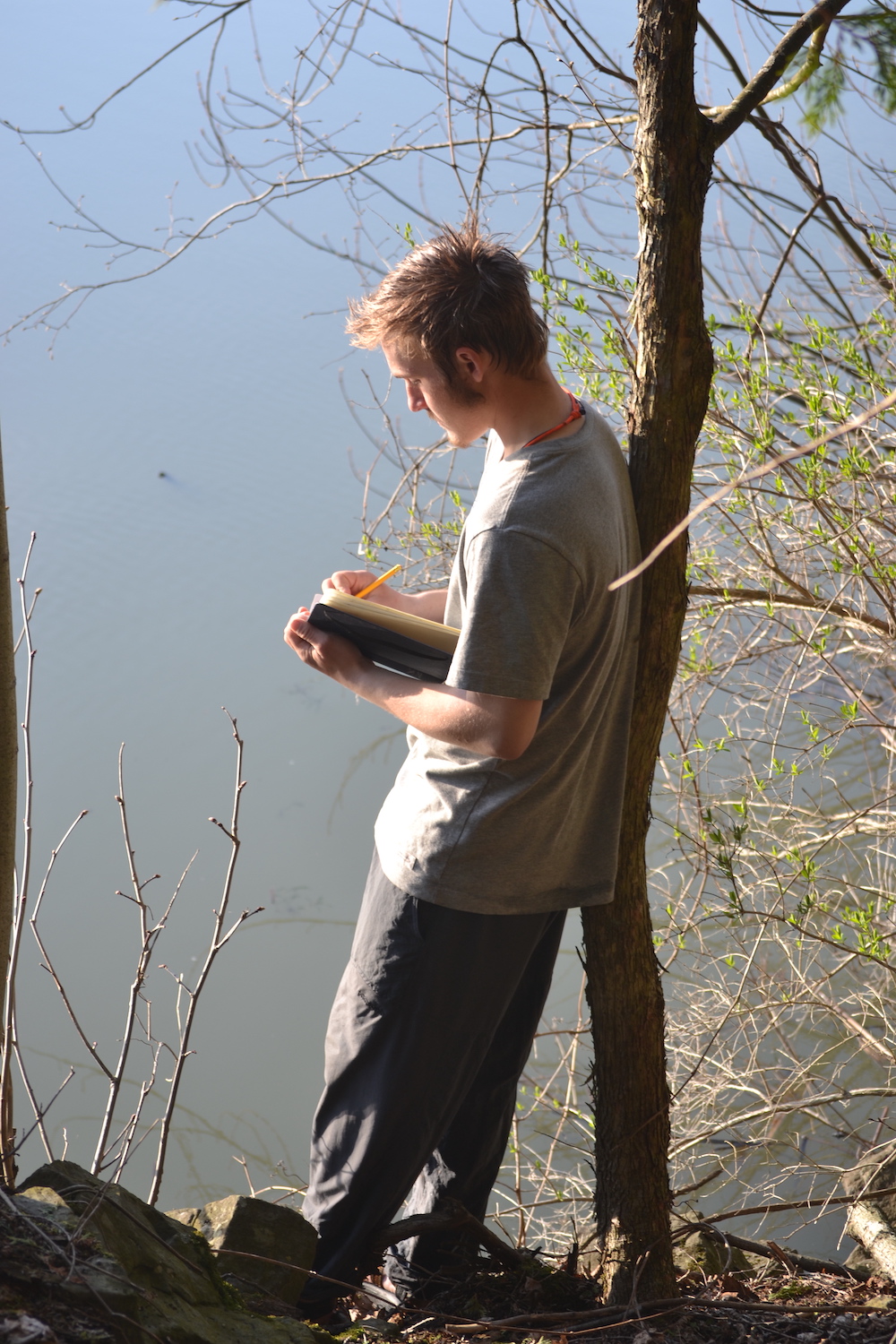 Noah reflecting at the Narrows of Dresden