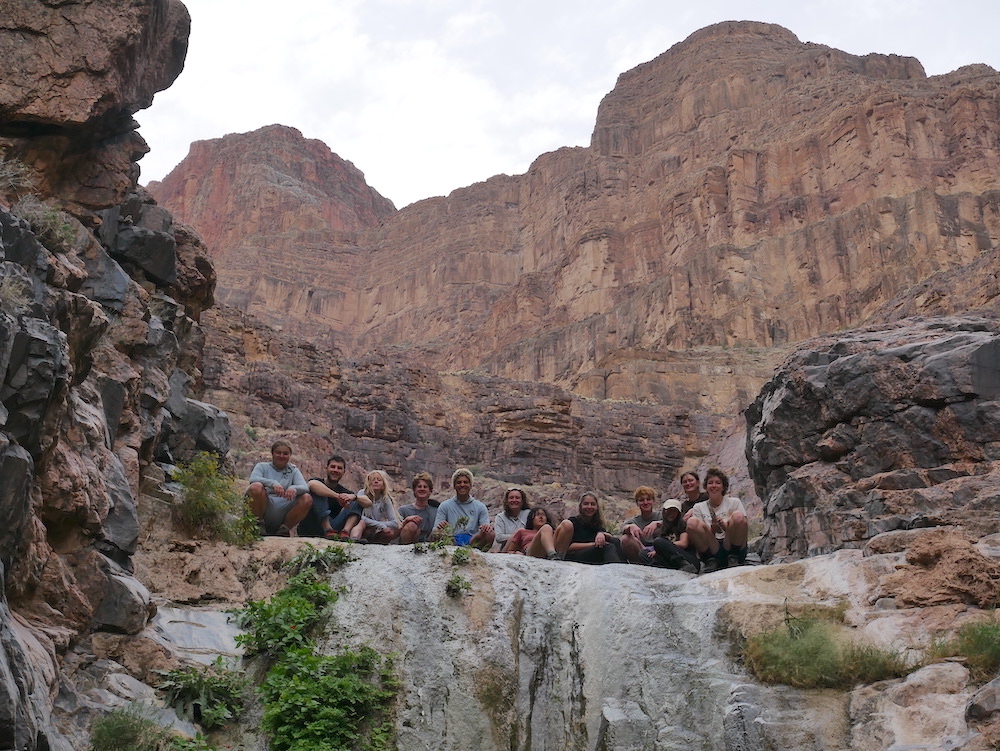 Adventuring Down the Colorado

By Semester BlogNovember 14, 2022No Comments 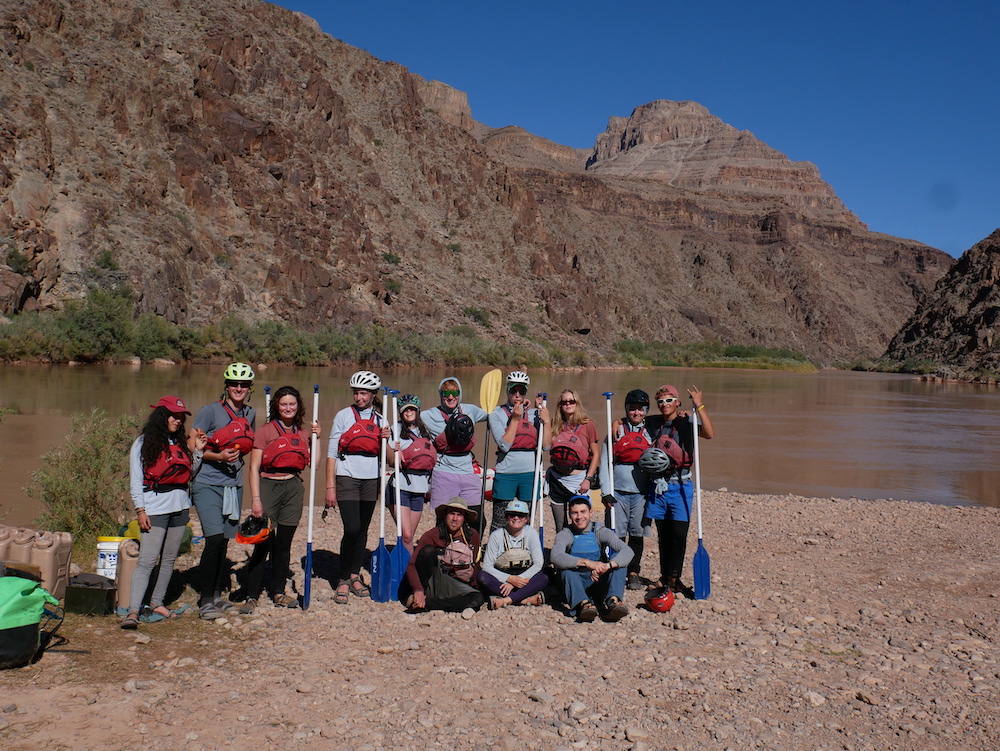 Unsurprisingly, the day began early. We drove for a few hours down twisting dirt roads until we reached our put-in at Diamond Creek. We packed all our gear for the next week in a dusty parking lot, the mighty Colorado River within sight. The hours flew by and it was past noon when we were finally ready. 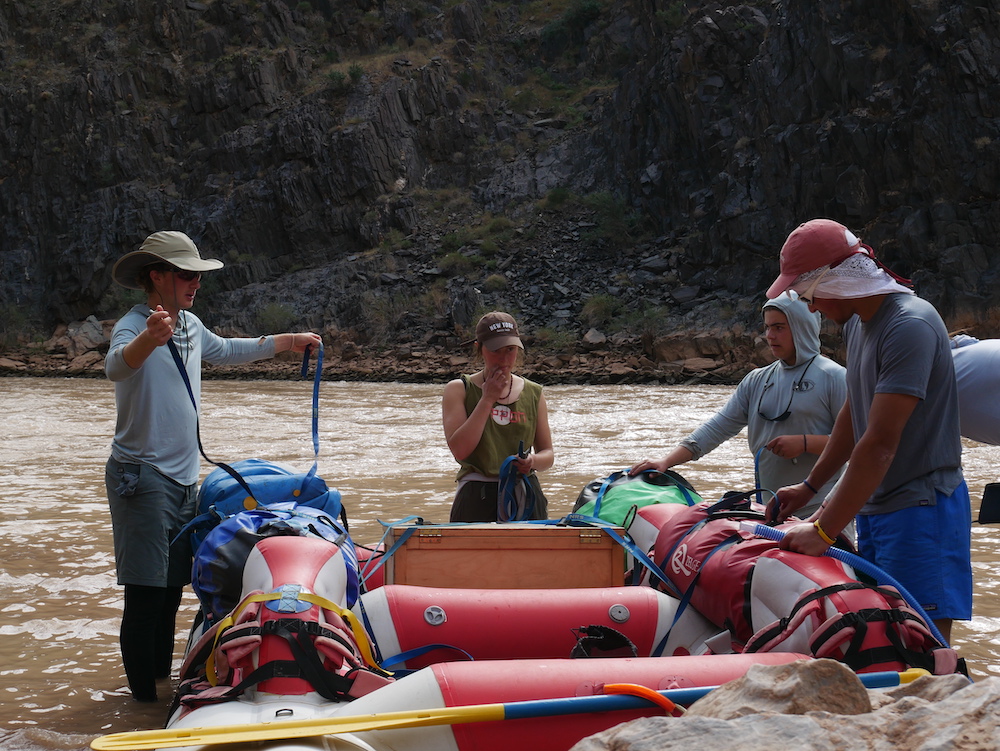 Jaimini, Anna, Owen and Aidan refine their gear lashing skills as they load up the catarafts.

The next step was learning how to strap down the various boxes and bags to the catarafts, then we spent some time practicing paddle strokes on flat water. After what seemed an eternity, we got ourselves pointed down the river and set off on this next leg of our great adventure. This should be obvious from the name, but I’ll make it doubly clear: the Grand Canyon is mind-blowing. At this stage in its journey to Lake Mead, the Colorado is quite narrow, often 100 feet across or less. On either side of the channel rises towering cliffs of red, brown and black rock. 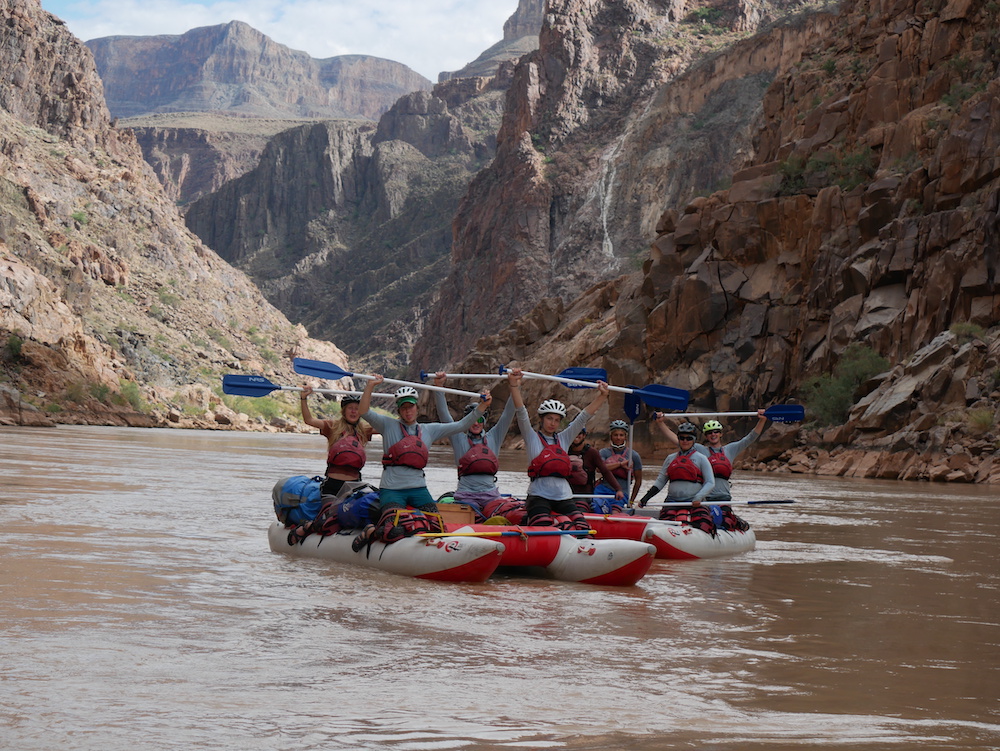 Close up to the water, the cliffs are shorter, but further back the cliffs and mesas extend a few thousand feet into the air; the rocks that form them layered like a cake and orange in hue. Then there is the river itself, snaking through canyons of its own creation.

In many places the water is placid and calm, in others waves ten feet tall or higher crest in frothing chaos and create an all-encompassing roar. In the middle of all this beauty and power, we can be found. Thirteen small people, on boats made of rubber and air, loaded with a few hundred pounds of gear. 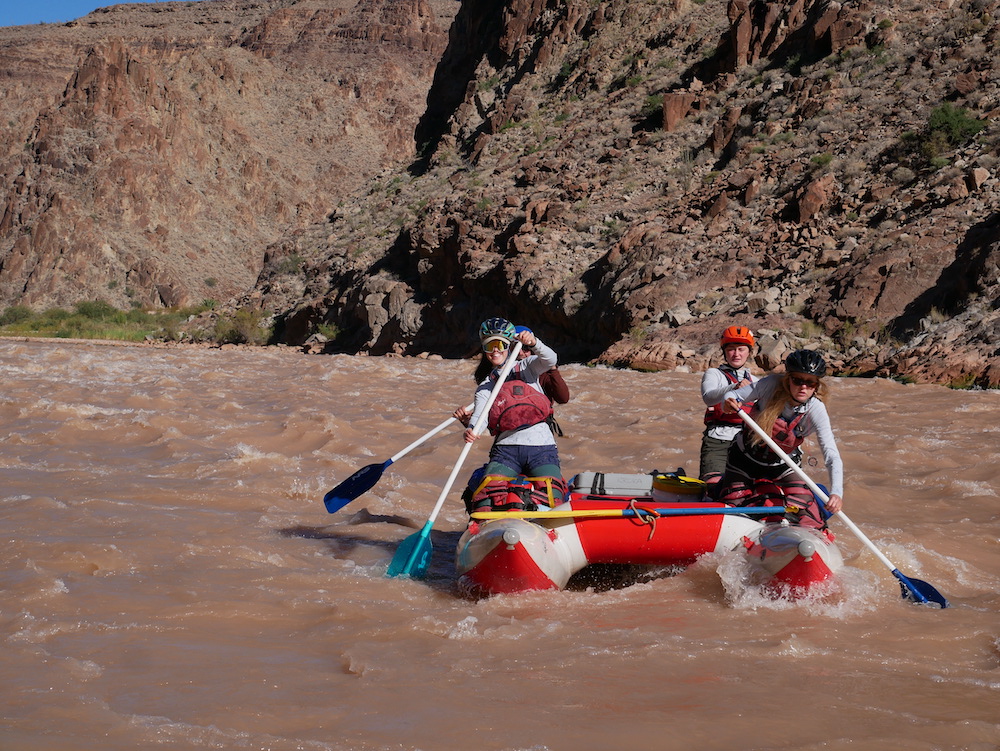 Naima, Josh, Anna and Prema digging in on Day 1.

Occasionally, while in the midst of a pounding rapid, our endeavor seems rather absurd. Then, when you make it through the whitewater and look back at your accomplishment, it seems to be the most fantastic, brilliant thing in the world! Ok, I’d say that’s enough poetics for the time being! We hit four rapids today: first a class four followed by a pair of class threes and finally a two. These rapids have no rocks in them, which makes them easier in some ways as there is not much to steer around. The flip-side is that the water is very fast and the waves are massive. 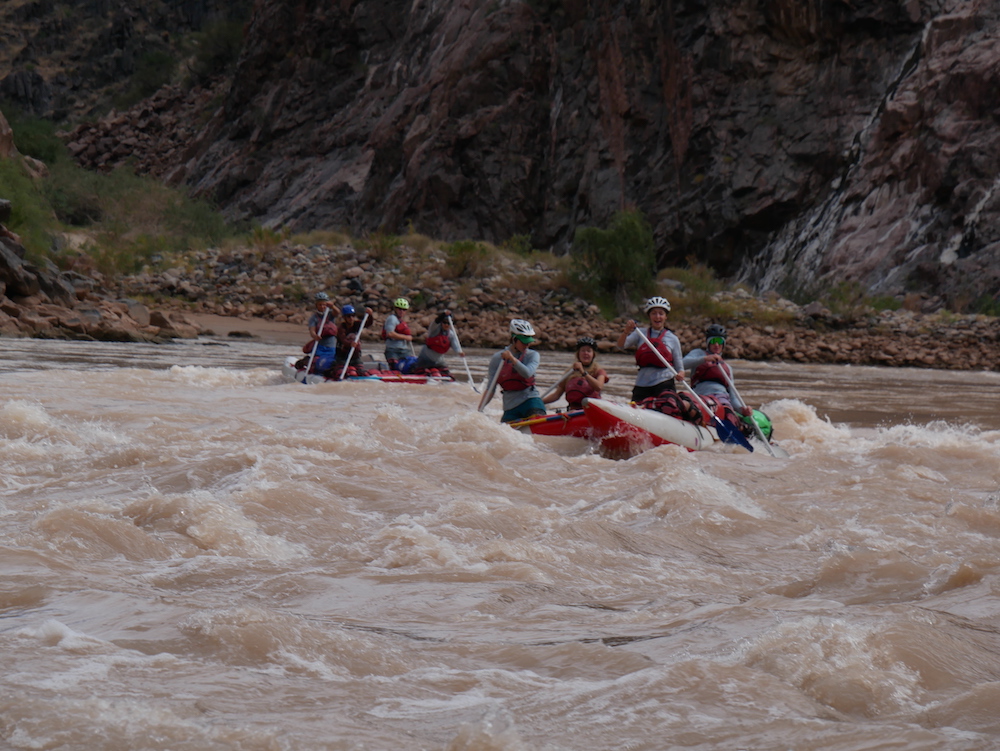 Yaara, Prema, Chloe and Jack in the front raft steering through with skill.

The day passed pretty uneventfully and we paddled through all of the rapids without incident. It felt wonderful to be out of the van and moving our bodies. Just before our campsite we pulled off the river and hiked up to a small waterfall. At least, it looked small from the bottom. There were a series of ladders going up, and as we ascended we saw that the falls extended back into a cliff face inside of a cave. We wanted to continue exploring but the day was getting late, so we reluctantly returned to the rafts, crossed the river and began setting up camp. We were thorough but slow, and ended up eating dinner in the dark. The moon rose over the canyon wall and cast a strange glow over the world as we settled in for the night. 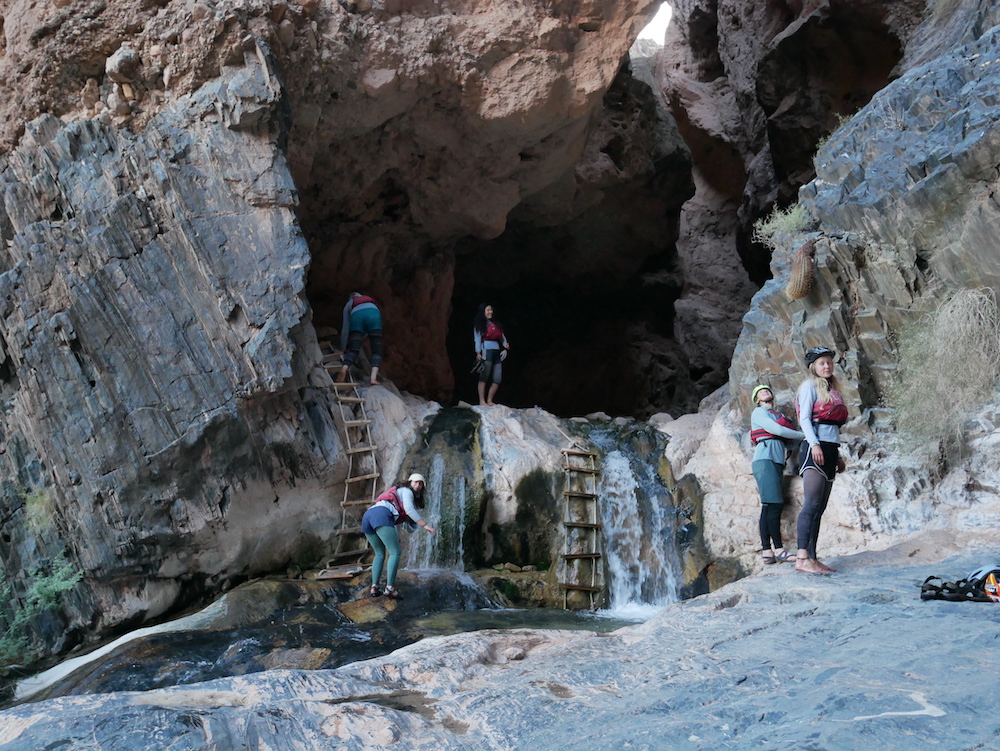 Hannah, Naima, Jaimini and Prema at the waterfall.

Day 2
Travertine Falls to Bridge Canyon
6 Miles
We slept in today, and when we finally cracked open our eyes the canyon was lit with a soft yellow glow. We had a fitness block before breakfast and a refreshing swim to wash away the sand and sweat. Jackson taught a class about water rights on the Colorado River, specifically how the indigenous peoples of the area have historically been denied water rights by the U.S. government. 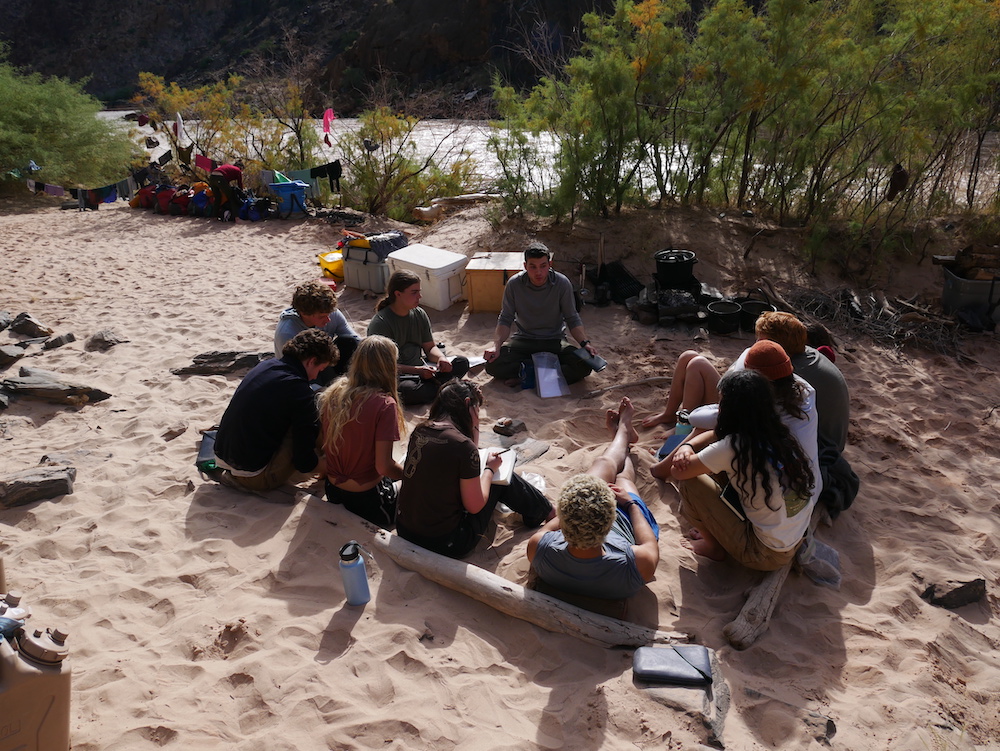 After class we ate lunch, loaded the rafts, dipped our paddles in the water and began the day’s journey. The first rapid we hit was a class five. The ride was bumpy, wet, and so much fun. Each rapid is separated by roughly a mile of flat water, so we were very ready for more excitement by the time the next spitting mass of white water came into sight. 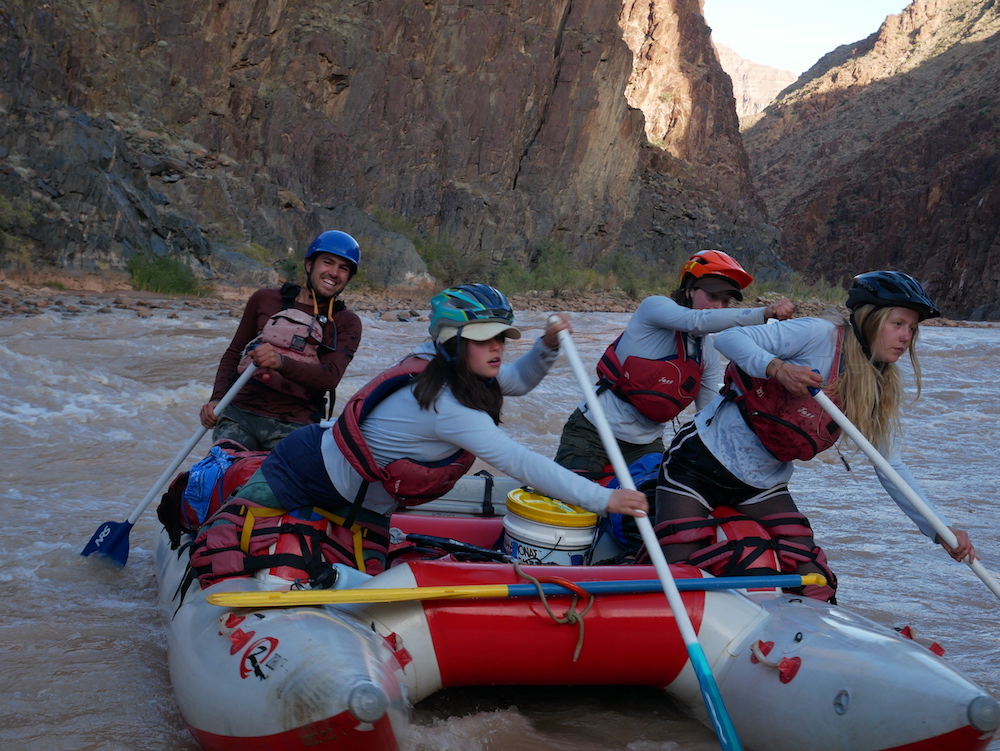 This was Killer Fang Falls, a class six. Not only was it the largest rapid yet, it was the largest of all the rapids we would hit on the river. We disembarked and went ahead on foot to scout our line and discuss the various dangers involved and how to avoid them. 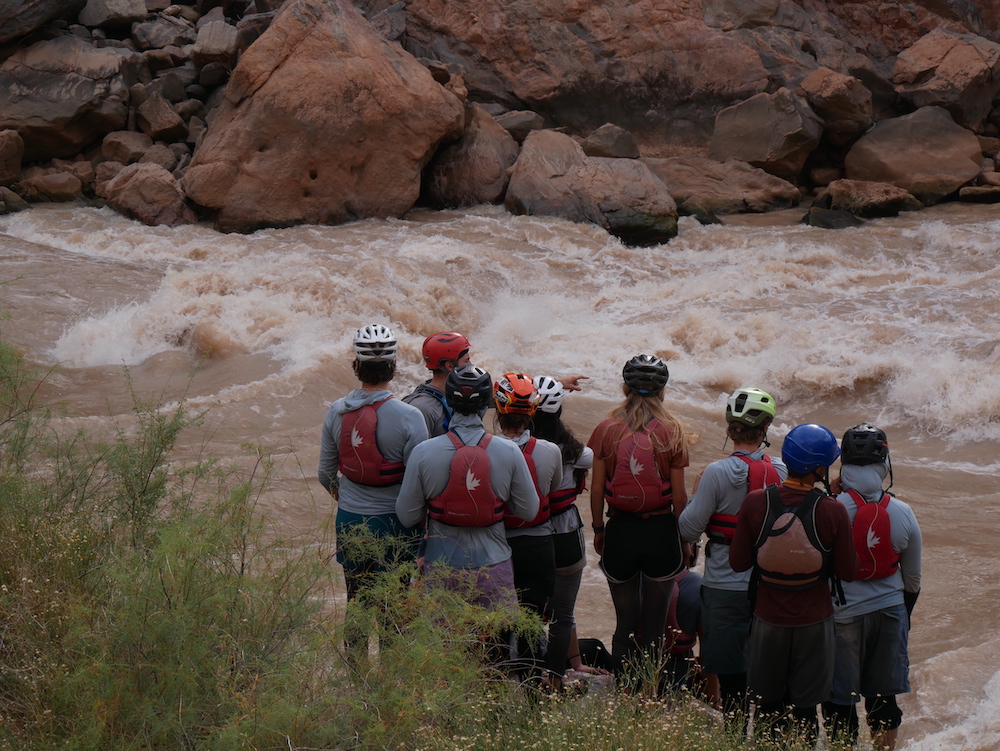 Then we were back on the rafts, gripping tight to our paddles as we descended into the roaring chaos. Anna, who was paddling the only kayak we had brought, flipped right in the middle of the rapid but swam to the rafts like a pro, safe and sound. 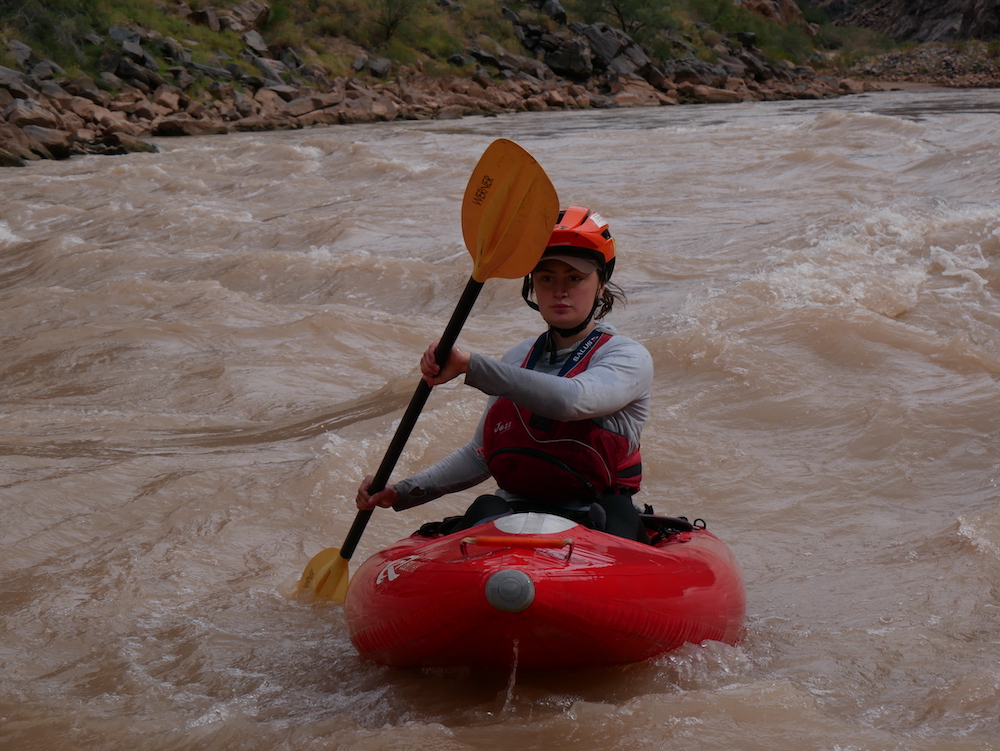 The rest of us managed to stay upright and we had an absolute blast, laughing and screaming the whole way through. The last rapid of the day was a class five, which we handled masterfully. We set up camp that night efficiently, and ate dinner under beautiful bright stars and a brilliant crescent moon. 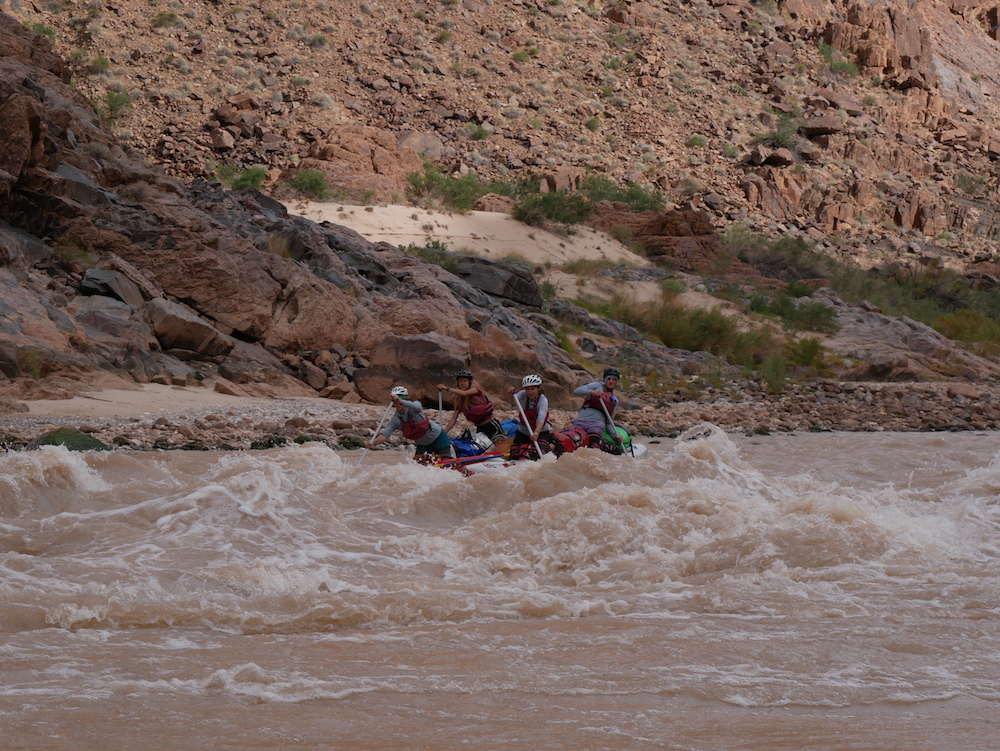 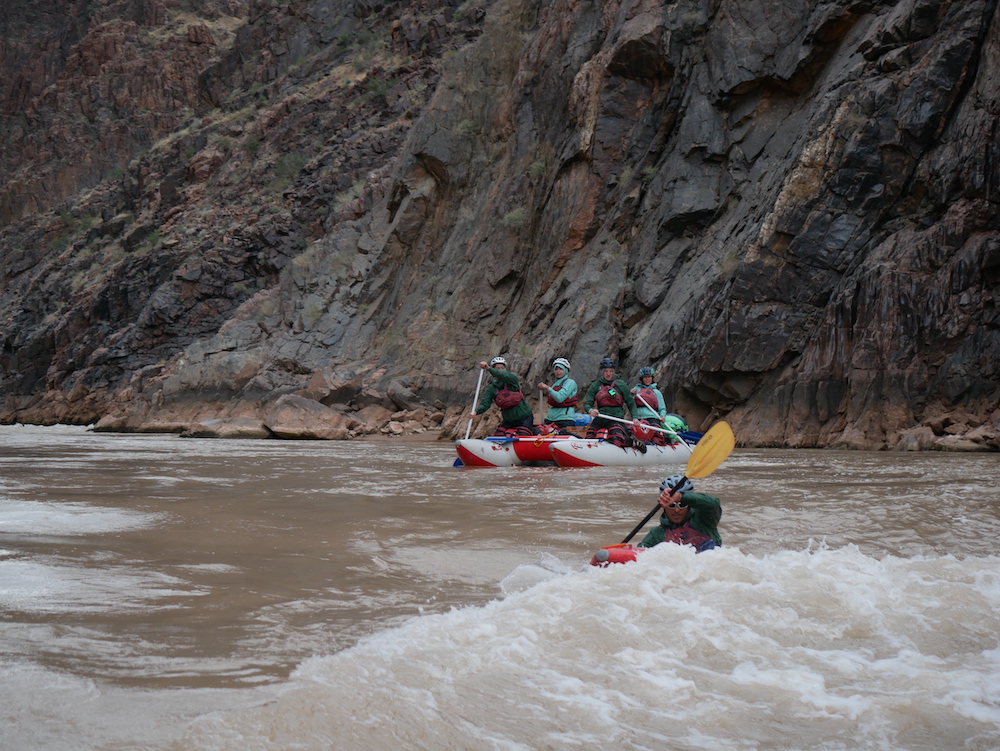 Aidan in the solo kayak, skillfully maneuvering, while Yaara, Chloe, Jack and Hannah wait their turn. 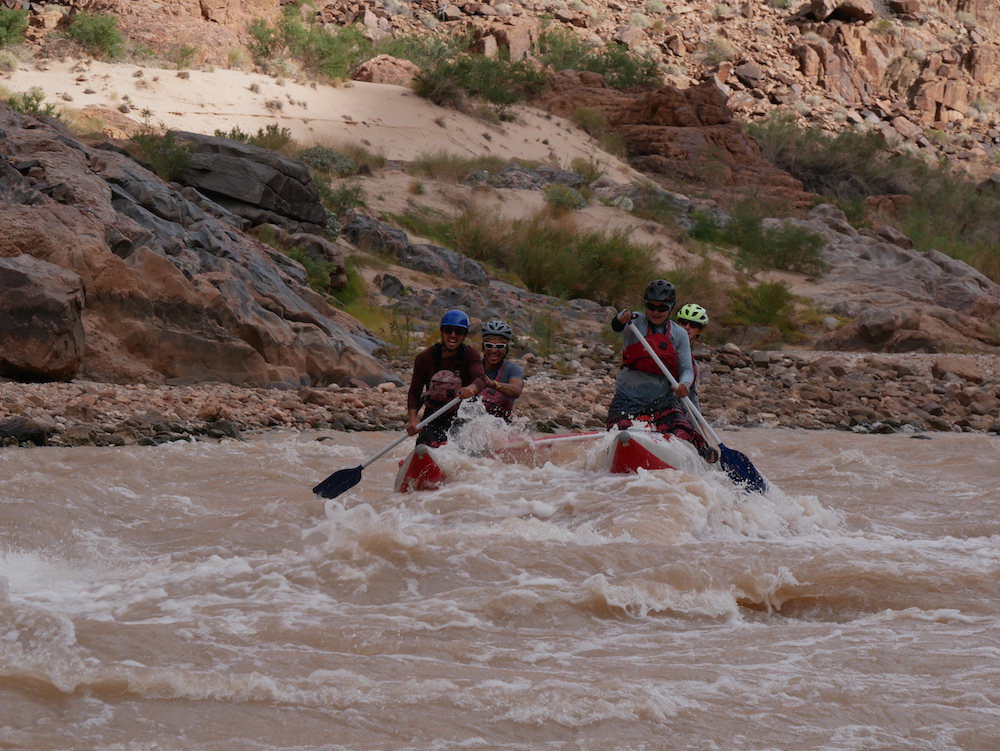 Day 3
Layover Day
Bridge Canyon
The day began with another rigorous workout followed by a chilly swim with a side order of cliff jumping. We continued our class with Jackson from the day before, diving deeper into the Colorado River water crisis and discussing what could be done moving forward to help protect the river. Much of the remainder of the day was spent exploring the canyon we were camped in. We took some guidebooks with us and identified plants and bushes as we climbed higher up the canyon. 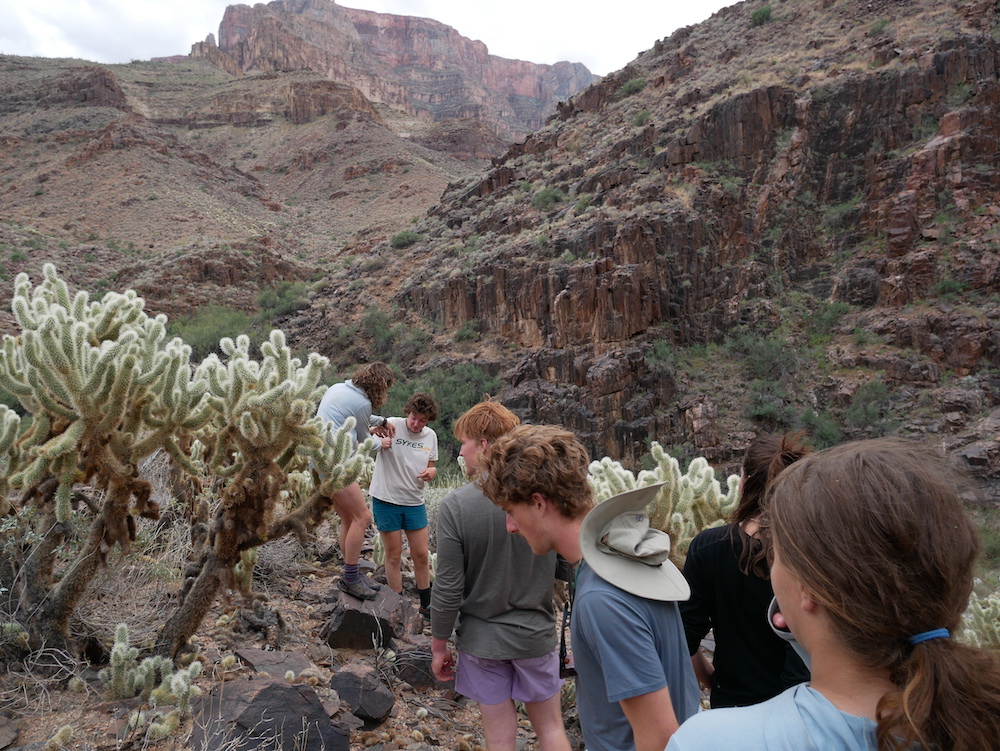 Close encounters with the cholla.

When we reached a slab of rock at the top of a waterfall, we sat in a circle and Tricia introduced that afternoon’s exercise. We had been together as a group already for over 60 days and had begun to form deep connections with each member of the community. Tricia told us to take some time to think about each of our fellow semester mates and come up with something that we admired about each person, as well as a growing edge for them. Everyone found a spot to sit among the desert flora and journaled on this for a while before continuing our hike. 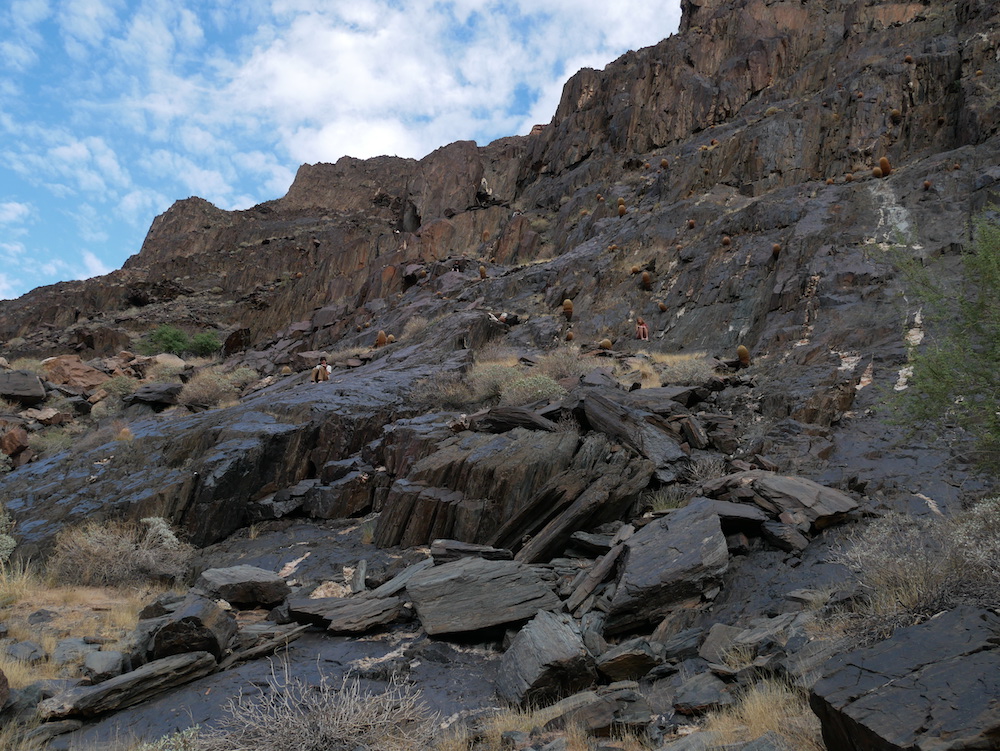 A few of us became intimately acquainted with several different cacti and spent several excruciating minutes pulling thorns. As we returned to camp we came across a tarantula, a new sight for many! Once again we ate under the stars. In the middle of evening meeting the wind picked up and the sand began to whip. We leapt up and sprinted about, checking tents and collecting loose articles of clothing. The storm was enlivening, and it was fun to see everyone running around with urgency to batten down camp. 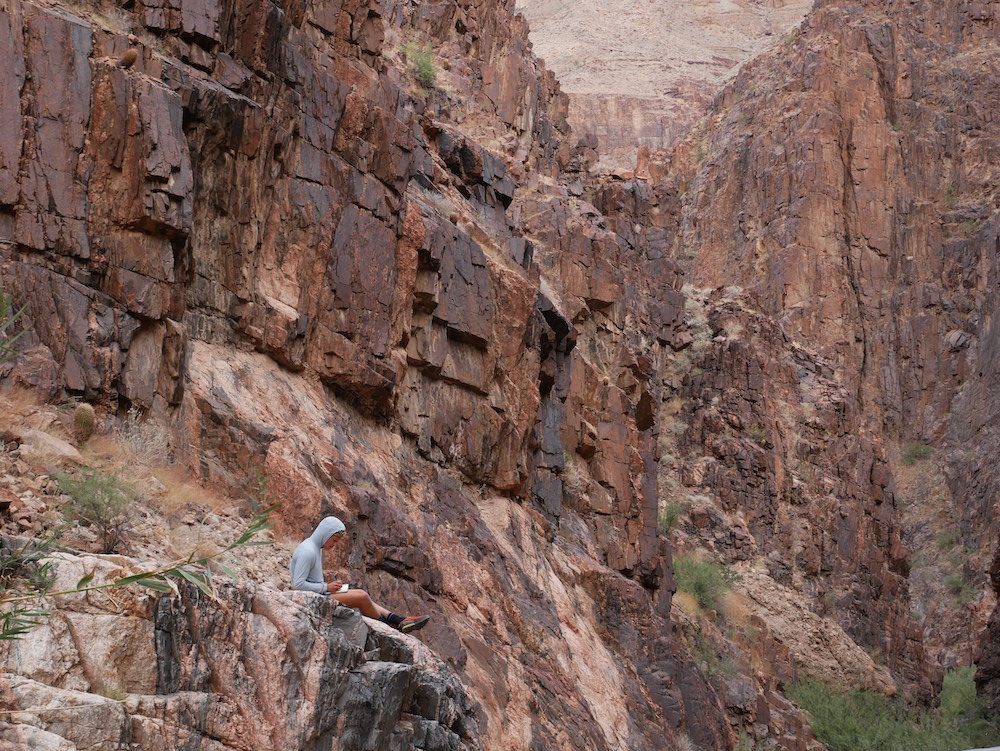 Day 4
Bridge Canyon to Surprise Canyon
13 1/2 Miles
After our usual fitness and breakfast it was time to give and receive the feedback we had worked on the day before. We weren’t sure quite what to expect and everyone was a bit nervous going into it, but once we started and had a chance to talk one-on-one we began to see the beauty of the exercise. It felt amazing to receive both praise and constructive feedback in such a heartfelt and intentional manner, and we loaded the boats for the day with a strong feeling of internal reflection. The paddling today was long, slow and arduous with essentially no whitewater. We were grateful to reach camp at the mouth of a large open canyon, and even more grateful to crawl into our cozy tents at the end of a long day. 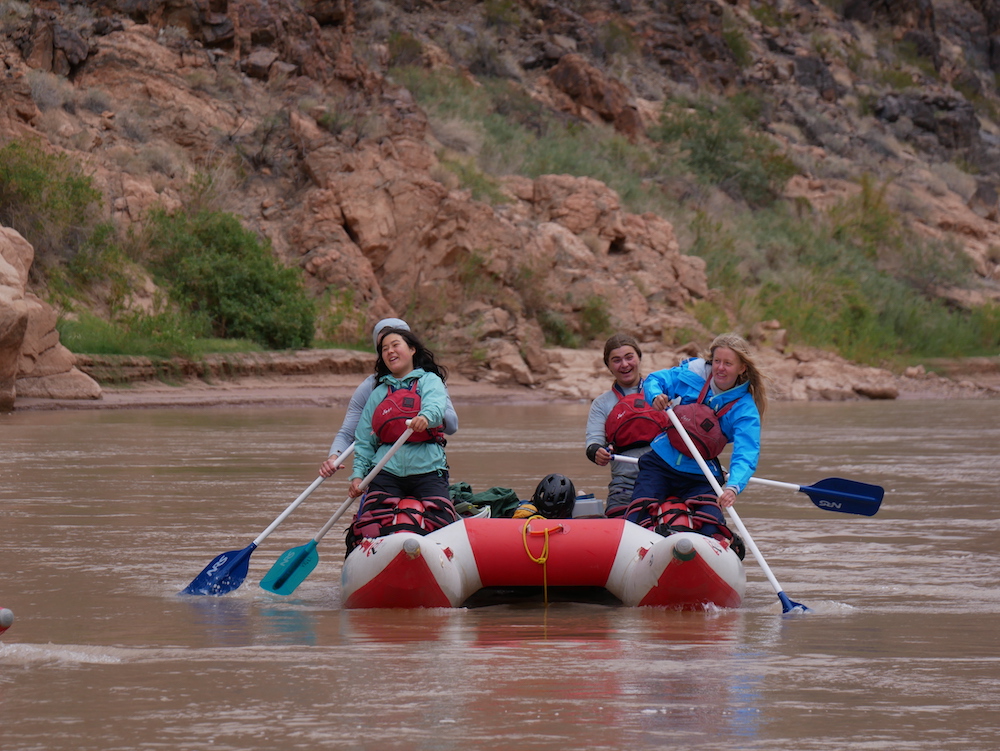 Day 5
Surprise Canyon to Mile 264.8 Camp
16 Miles
Canyon running for fitness this morning. It felt great to pound along through the rocks and sand, hopping from side to side of a small stream that wound between the high rock walls. As we returned to camp for breakfast the rays of early morning light struck the canyon walls, turning them to golden fire. Over breakfast, Tricia laid out our challenge for the next few days: a group solo! We would be without the instructors for two days, traveling and camping as normal without the guidance of our staff leaders. 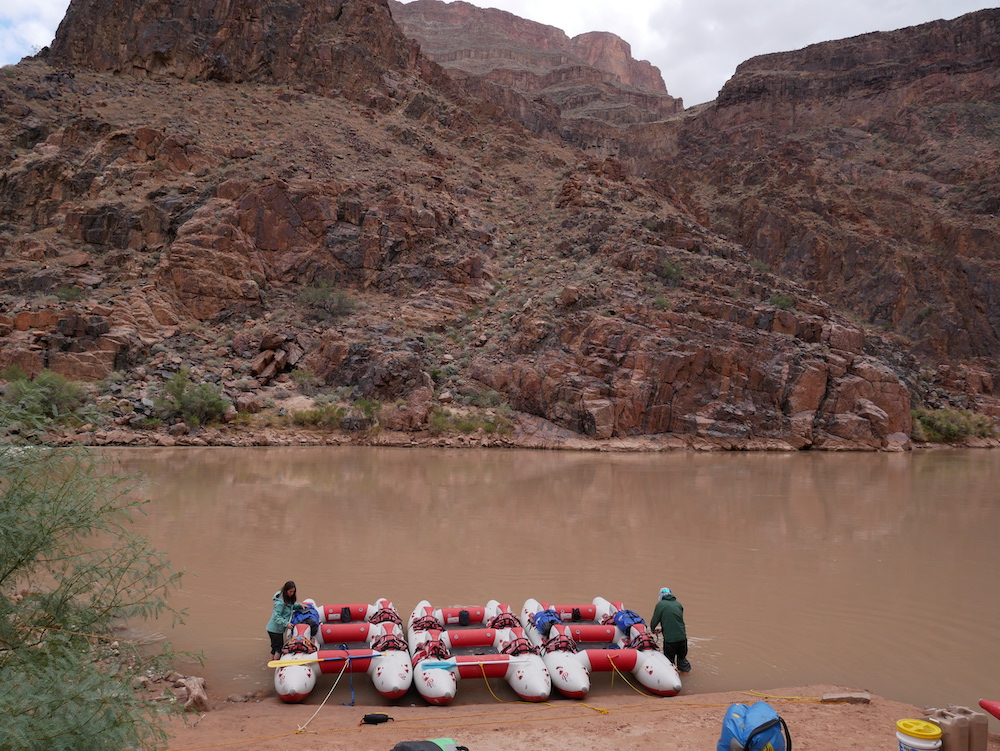 We worked as a group to lay out the route, discuss safety, and received our academic assignments. Then Tricia, Jackson and Josh took a tent and some food and headed off on one of the rafts. We talked some more about our solo before breaking down camp and starting the day’s travel: 16 miles to reach camp, by ourselves. We were a little on edge at first, but everything worked out wonderfully, and camp was fully set by nightfall. We sat together, eating pasta and looking out over the moonlit Grand Canyon.

It felt in that moment that life could not be better; we had passed the first day our solo with flying colors and were ready and excited for the challenges of the day to come. 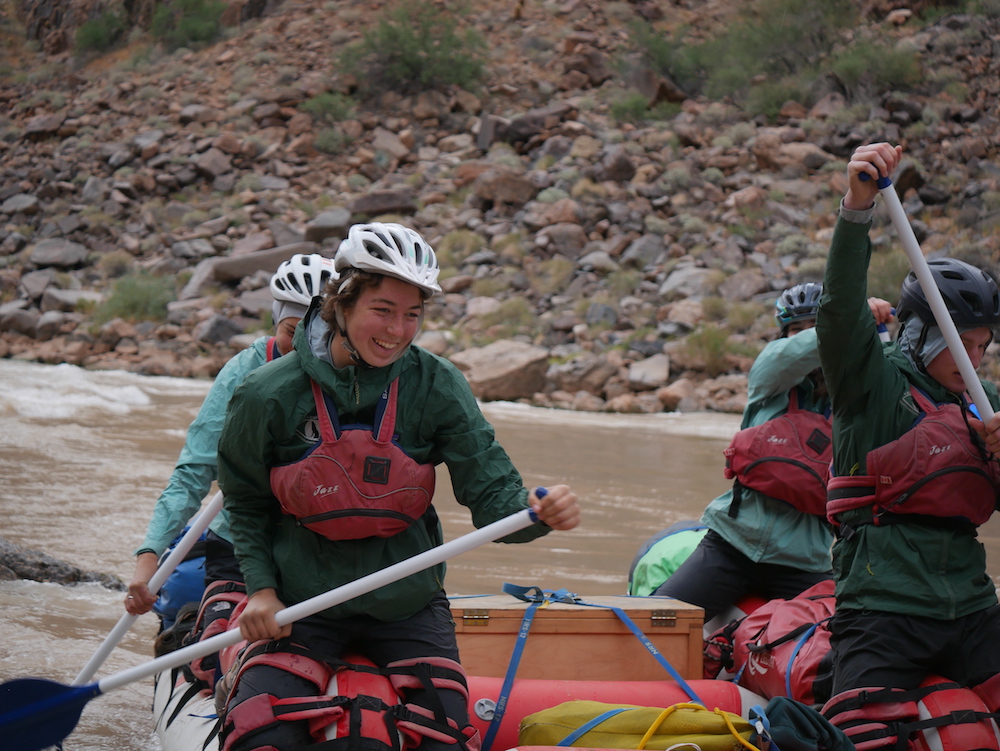 Day 6
Mile 264.8 Camp to Mile 269.9 Camp
5 miles
We slept in today. A lot! The sun rose as we cooked breakfast and we packed camp before settling down in the sand to work on academics. Each of us chose a poem to memorize and began working on a Book of Wisdom page with the poem and individual artwork. We ate a quick lunch before setting out on the river. We made good time again today, and as camp came into sight we noticed a cave that Tricia had mentioned the day before. A split in the rock rose 50 feet up the cliff face, the perfect location for our kitchen. Dinner was rice, lentils and chicken. The cave was round, our bowls were round, the bowls of our spoons were round; the symmetry was calming. Once bowls were washed and the fire stoked we leaned against the smooth cave walls and continued working on our poems. The moon rose as we snuggled up for the night, content with the day. 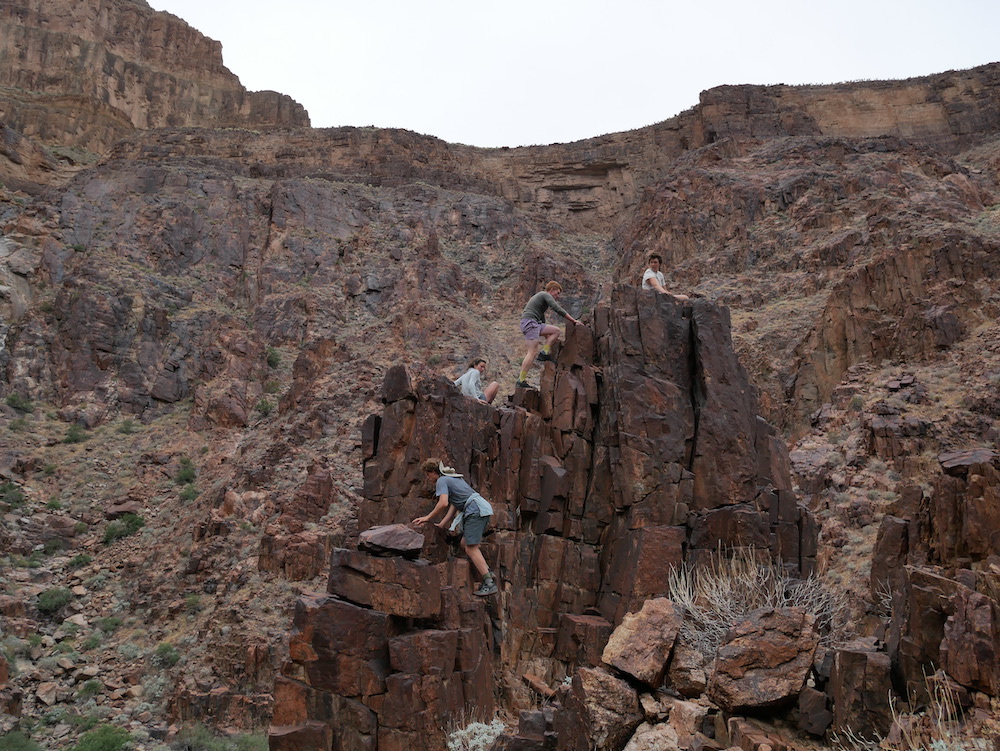 Day 7
Mile 269.9 to Pearce Ferry Take out
10 miles
Jack sang us into consciousness at 5:00 this morning. Why the early hour? We had to meet the instructors at 9:00 at a location five miles down river. Camp takedown went off without a hitch and we paddled so quickly that we caught up with our wonderful leaders before they had even left their campsite! We stopped to admire a waterfall and bathe in a small pond at the base of a clear, cool stream. The last five miles of our trip were relaxed, slow and enjoyable. 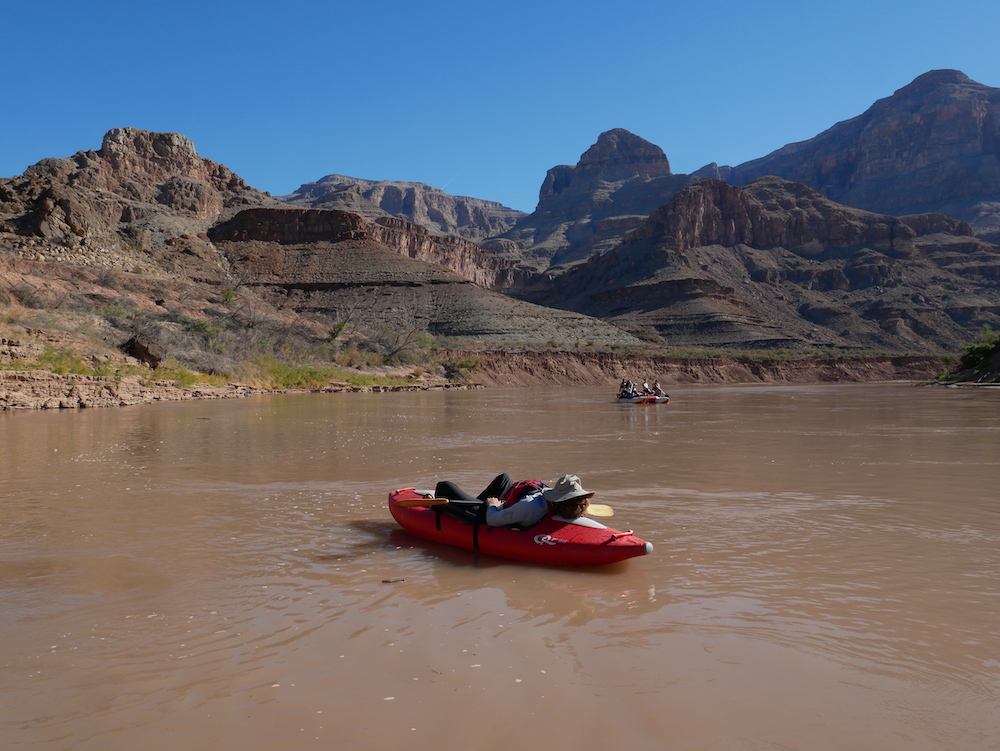 We floated down the languorous channel, sunbathing and laughing. As we cleaned and packed away our gear at the takeout our accomplishments became clear. We had tackled massive whitewater, paddled long days in heavy boats, and had a lovely, successful group solo. During this time especially we became a tighter knit group and had performed at a high level. We had conquered our little stretch of the Colorado. This ends the waterborne adventures of Fall Semester 2022. We will spend a day in Tusayan preparing for the Arizona Trail and then head out on the longest leg of our journey: biking! I have no doubt there will be much to write about! I may go through a few pencils!

Some out-of-context, anonymous quotes from our week on the river:
“I was warm and then I was cold…Kroka!”
“Are there snakes in this river?”
“WHY IS THERE NO CHEESE?!!”
“Where is the freaking moon?!”